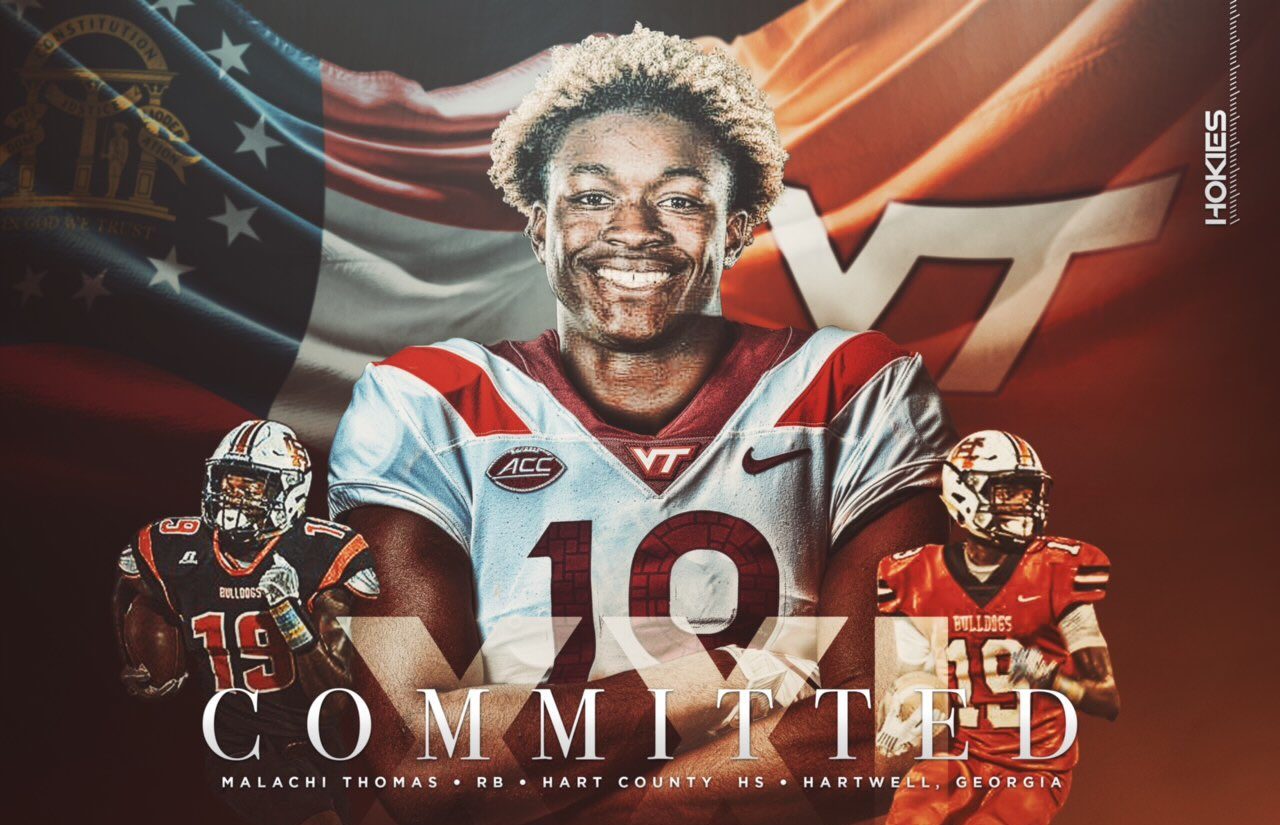 The Georgia to Virginia Tech movement is officially on.

The Hokies secured their first commitment from the Peach State on Wednesday. That came in the form of 2021 running back Malachi Thomas, out of Hart County High in Hartwell.

This is also Virginia Tech’s 15th commit and second running back in the class of 2021. Virginia Tech’s class is currently ranked 49th nationally and 12th in the ACC, according to the 247Sports Composite rankings.

Thomas, who is looked at by many as a severely underrated back, is unranked on many recruiting platforms. That’s not to say the 6-foot, 180-pounder should be overlooked though. Thomas committed to the Hokies over Kansas State, Duke, UCF, Memphis, and many others.

A large bulk of his offers come from American Athletic Conference and Conference USA schools. He was named the 2019 Georgia 3A State Offensive Player of the Year.

When talking to Thomas, he described Virginia Tech as a “family.”

“They just made me and my family feel like part of their family”, Thomas said via text when asked about what stood out about the Hokies.

Playing in Blacksburg and at Virginia Tech was simply too good of an opportunity to pass up for Thomas. Thomas said all the coaches met with him over Zoom during the recruiting process.

“A dream come true,” Thomas said of the opportunity to play for the Hokies. “I finally get to play in the Power 5 and (for) one of the best college football teams in the country.”

Thomas’ praised speed and quickness in high school should definitely help him when he arrives on campus in the fall of 2021. It’ll be interesting to see how things play out when Thomas unpacks his bags.

Keshawn King, a potential stud in the backfield, will be entering his junior season. South Carolina native Chance Black will also be arriving in the fall of 2021. Junior college transfer Marco Lee will be competing for playing time also, as a senior.

A path could certainly be there for Thomas to redshirt the 2021 season, before competing for playing time as early as 2022. Nevertheless, this is a good sign for head coach Justin Fuente and company as Thomas has a chance now to separate himself in a room with quality, but unproven running backs.