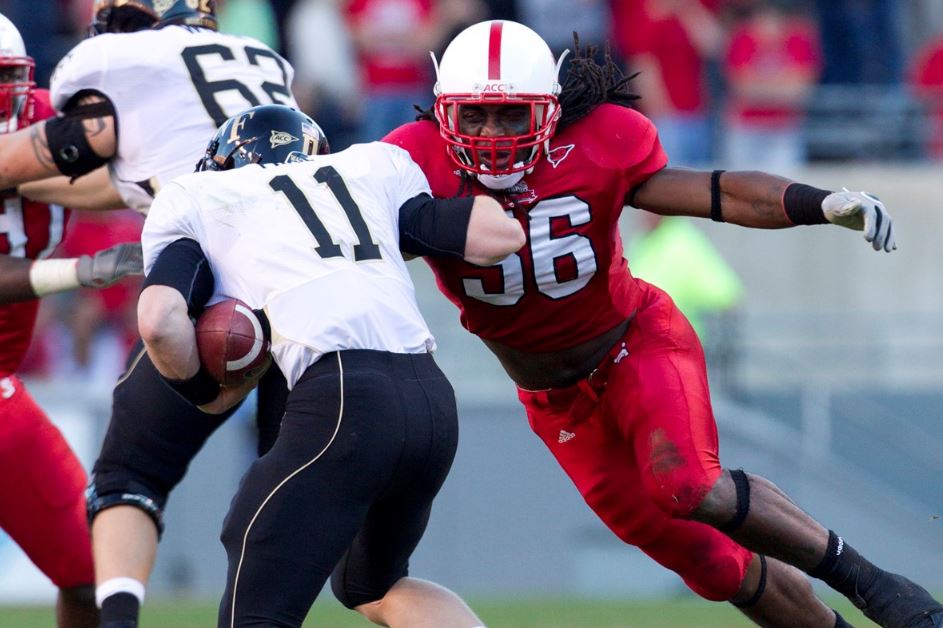 In a 4-part series, we caught up with Irving to discuss him time in Raleigh among other things. In the third part, Irving says what he values most about his time at North Carolina State.

While Irving enjoyed watching the great NC State defenses, playing football wasn’t something he enjoyed for very long. Irving said he had little interest in it at all until he moved from New Jersey to North Carolina in high school.

“I didn’t even like football, believe it or not,” he said. “I only started playing when I transferred down to North Carolina for school. Back home, back in Jersey, I used to walk home from school; it was a only a couple blocks. When I got down here to North Carolina, you had to ride the bus. And I didn’t even know what bus I had to ride. So I walked out of the building and I seen an old white guy, covered in white hair. I didn’t know who he was. But here’s this old white guy, white hair and a bucket hat. And I’m just walking around and I see the buses pull off and I’m like, ‘damn, I’m stuck’.

“And he yelled at me to go into the weight room and sign up,” Irving added. “I ask him what I’m signing up for and he says I’m signing up to play football. I said I don’t even like football. He said just go in there and sign up. So I signed up and started playing.”

Once football became part of Irving’s life, it came natural. It wasn’t until his senior season, however, that he realized how good he actually was.

“my junior year, I got a couple letters,” he said. “But my senior year, I was like ‘wow, I got a chance to go to college and play football’. That’s a real thing.”

Irving had recognized his talent, but his best position was ambiguous for a while. At a small school, Irving played in many spots.

“Our school was 1A, so I played both ways: tight end, split out wide some, defensive end,” he said. “Then one year, we had our defensive ends line up at outside linebacker and then drop. And the following year, they put me at linebacker full-time. And that was it. I accepted it and tried to do what I could.”

When looking back on his time at NC State, Irving said it’s inarguable that it was a success. Not only was he an All-ACC and All-American linebacker, but his time in Raleigh was bigger than football.

“I was able to graduate, and that’s what the goal was,” he said. “I was also able to build some relationships that are lifelong relationships with guys that I still talk to today. To this day, I can call ’em up and have a conversation. Those relationships, those experiences, everything that I worked through — good and bad — I wouldn’t change nothing. I couldn’t ask for anything else man. That’s all you can ask for. I got my degree and I did what I had to do. I don’t have any complaints about it.”

Irving missed all of his junior season to injuries suffered in a car accident. Although he was unable to play in 2009, Irving said watching from the sidelines made him a smarter player.

“I was able to learn so much from different coaches,” he said. “I sat out one year and was able to see things from a different angle — as a coordinator or a coach, aside from being a player. To me, I always seen a play, practiced a play, and I’d go play football. The coaches always gave me something to look at, something to think about.”

The only regret that Irving said he has about his time at NC State is being unable to win the ACC. As a senior in 2010, Irving and NC State needed only to win at Maryland in the regular season finale to advance to the conference title game. The Terrapins ultimately held off the Wolfpack, 38-31.

“I wish we could’ve won a title, like an ACC title — to be able to give that to the fans and give that to the school,” he said. “But unfortunately, we couldn’t. That’s the only thing that I feel like was a letdown, in my eyes. We had guys; I think we had a year, that at one point, our whole defense was playing in the NFL. You have so much talent come through there and to just not be able to put it in the trophy room for each other, for the coaches, for the university — I think that’s one thing that a lot of us would say we wish we could’ve done.”