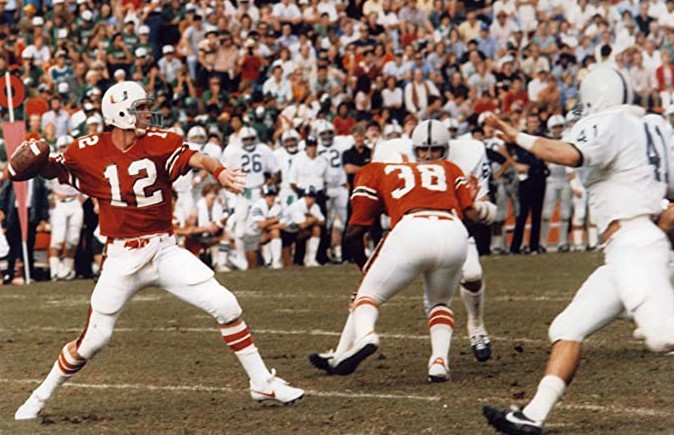 Halloween is the holiday where horror is at the forefront. On this day 40 years ago, that was the case for college football’s No. 1 team.

Penn State had held the top spot in the polls at it traveled south to take on Miami. The Nittany Lions tried to rally late, but self-inflicted wounds were too much to overcome in a 17-14 upset win by the Hurricanes.

Miami had spent time in the polls, but was unranked as it arrived. The Hurricanes were 4-2 and taking on their fourth ranked opponent.

For the majority of the day, Penn State could not get out of its own way. The Nittany Lions had consistently failed to convert short third downs and usually reliable Brian Franco, the kicker, had missed four field goals, including two shorter than 25 yards.

On the other side, Miami’s Dan Miller had made three field goals. Miami quarterback Jim Kelly, a native of Pennsylvania, threw for 220 yards, no interceptions and an 80-yard touchdown pass to Larry Brodsky. All of that helped Miami hold a 17-0 lead in the fourth quarter.

Despite all that had gone wrong, losing star running back Curt Warner and an inability to run the football after averaging more than 300 yards on the ground over the first six games, Penn State still had fight. The Nittany Lions struck fast.

Penn State first got on the scoreboard when quarterback Todd Blackledge, who finished with 358 yards passing, found Mike McCloskey on a 13-yard touchdown pass. After a Miami fumble on the ensuing possession, Blackledge’s screen pass to Jon Williams went for a 26-yard touchdown. What had been a 17-point hole was now just a 3-point deficit.

On the next Penn State drive, Blackledge had the Nittany Lions in position to steal the contest with less than three minutes to play. A long pass to Williams, who was playing in place of the injured Warner, put Penn State at the Miami 25-yard-line. On the very next play however, Williams fumbled and the Hurricanes recovered.

Penn State would get one final possession, but Blackledge’s final pass of the day was errant and intercepted by Miami’s Fred Marion. That sealed the victory.

The loss would ultimately hamper Penn State’s national championship hopes. The Nittany Lions lost again two weeks later to Alabama, but finished the year on a 3-game winning streak with wins over Notre Dame, No. 1 Pittsburgh and No. 8 USC in the Fiesta Bowl. Penn State finished 10-2 and No. 3 in the final polls.

Miami would not lose the rest of the way as it finished 9-2. The Hurricanes were on probation and ineligible for a bowl appearance, but were ranked eighth in the final AP Poll.

The nine wins for Miami tied a school record and was the most in 31 years. Perhaps the most impressive victory from that season came on this day four decades ago.