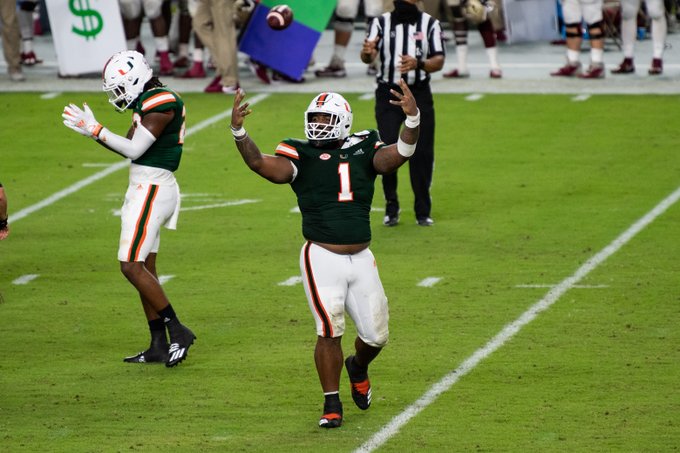 The first full weekend of college football is upon us.

In one of the most anticipated games of the week, No. 14 Miami will arrive in Atlanta to take on reigning national champion Alabama. It will be the first meeting between the schools since the Sugar Bowl for the national championship to close the 1992 season.

Top-ranked Alabama is always among the most — if not the most — talented teams in the country. Replacing the likes of Mac Jones, Najee Harris, Jaylen Waddle and Heisman Trophy winner DeVonta Smith however, won’t be easy.

Bryce Young will take the reigns at quarterback with big expectations. Brian Robinson Jr. and John Metchie are two players to watch at the skill positions. As a team, Alabama ranked in the top five nationally in both scoring and total offense last season. Evan Neal may be the best offensive lineman in the country.

Defensively, Miami replaces a plethora of talent up front, including Jaelen Phillips. Nesta Jade Silvera however, could be one of the ACC’s best at defensive tackle. Zach McCloud is a very experienced linebacker and a leader on the defense while Bubba Bolden headlines a secondary that includes Amari Carter and DJ Ivey.

The strength for Miami this season however, should be on offense. D’Eriq King is coming off a season-ending injury, but is a dual-threat who can make plays in a variety of ways. Cam’Ron Harris and Don Chaney Jr. are a solid duo in the backfield while Mike Harley and tight end Will Mallory are playmakers in the passing game. After averaging 34 points per game last season, Miami should have one of the best offenses in the ACC.

Alabama struggled early on defensively last season, but hit its stride late. The Crimson Tide are talented up front, but absolutely loaded at linebacker and in the secondary. Will Anderson, Christian Harris and Tennessee transfer Henry To’o To’o make for what should be the best corps of linebackers in the country. Patrick Surtain Jr. may be gone, but with Josh Jobe and Malachi Moore in the secondary, the Crimson Tide will be just fine.

The experience edge at quarterback for Miami should be enough to keep this one interesting for a while, but in the trenches, Alabama should ultimately have its way. Expect the Hurricanes to hang tough for most of the contest, but never bet against Alabama head coach Nick Saban. Saban is 14-0 in openers at Alabama, including 9-0 on neutral fields.

Boise State (0-0) at UCF (0-0)
Thursday, Sept. 2 at 7 p.m. ET (ESPN)
Two Group of 5 powers will meet in Orlando in a contest that could actually have New Year’s Six implications. The contest will feature two first-year head coaches in Andy Avalos and Gus Malzahn and two very experienced quarterbacks in Hank Bachmeier and Dillon Gabriel. Boise State has won six straight openers while the Knights have started 1-0 in each of the last five seasons.
Prediction: UCF 38, Boise State 31

South Florida (0-0) at NC State (0-0)
Thursday, Sept. 2 at 7:30 p.m. ET (ACC Network)
South Florida hopes year No. 2 of the Jeff Scott era begins better than the first one ended. The Bulls are a young team and Raleigh is not an easy place to play. NC State looks to build on an 8-4 campaign as Dave Doeren begins his ninth season as head coach. The Wolfpack have finished with a winning record in six of the last seven seasons.
Prediction: NC State 41, South Florida 16

Florida Atlantic (0-0) at No. 13 Florida (0-0)
Saturday, Sept. 4 at 7:30 p.m. ET (SEC Network)
Despite spending much of his coaching career in Florida, this will be Willie Taggart’s first trip to Gainesville as a head coach. Florida Atlantic had a 5-4 campaign in Taggart’s first season. Florida looks to bounce back after losing its final three games last season. The Gators have to replace quite a bit of talent on offense, but they have made a New Year’s Six bowl in each of Dan Mullen’s first three seasons as head coach.
Prediction: (13) Florida 34, Florida Atlantic 13

No. 9 Notre Dame (0-0) at Florida State (0-0)
Sunday, Sept. 5 at 7:30 p.m. ET (ABC)
Florida State has suffered through three straight losing seasons and hasn’t won its opener since 2016. Notre Dame is coming off a College Football Playoff berth, but has some key pieces to replace on both sides of the ball. Wisconsin transfer Jack Coan will get the start at quarterback for Notre Dame while FSU has yet to disclose whether Jordan Travis or UCF transfer McKenzie Milton will start. Kyren Williams rushed for 185 yards and two touchdowns in last season’s 42-26 win for the Fighting Irish.
Prediction: (9) Notre Dame 34, Florida State 24