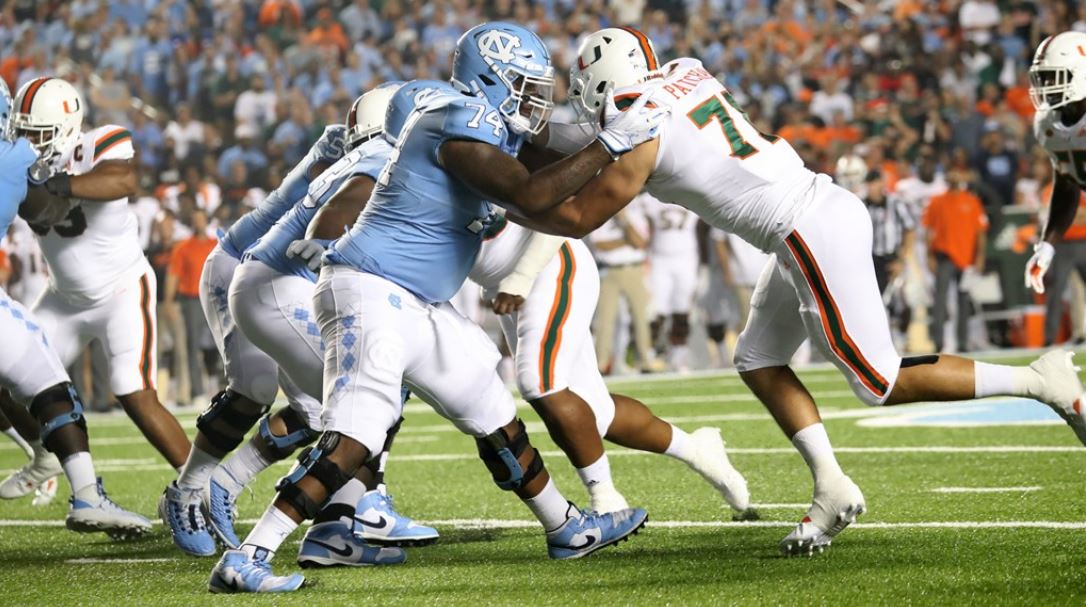 Contenders for most of the season, Miami and North Carolina have been eliminated from the ACC Championship race. What is still in the picture for both schools is a New Year’s Six berth.

The teams will duke it out in South Florida on Saturday. With a record of 8-1, the 10th-ranked Hurricanes have won six straight. North Carolina is 7-3 and ranked No. 17 in the country.

The contest will feature no shortage of talented skill players on offense. Behind center, North Carolina’s Sam Howell and Miami’s D’Eriq King each rank in the top 30 nationally in passer rating. Howell leads the ACC in passer rating, passing yards, yards per attempt and touchdown passes. He passed for 274 yards and two touchdown in last year’s win over Miami.

North Carolina running backs Michael Carter and Javonte Williams each have more than 900 yards rushing this season and rank in the top five in the ACC in that category. Dyami Brown is the ACC’s leading receiver with 932 yards while Dazz Newsome is an outstanding No. 2.

King has a nice corps of playmakers around him as well. Cam’Ron Harris has had a solid year in the backfield while wide receiver Mike Harley has enjoyed a breakout year for the Hurricanes. The tight end tandem of Brevin Jordan and Will Mallory is likely the best in the ACC.

Where Miami has a distinct advantage is on defense. The Hurricanes rank behind only Notre Dame and Clemson in scoring defense in the ACC and fourth in total defense. Defensive ends Quincy Roche and Jaelan Phillips are a big reason why Miami ranks in the top 10 nationally in tackles for loss. Safeties Amari Carter and Bubba Bolden are a pair of hard hitters and the top two tacklers for Miami.

The Tar Heels rank in the middle of the pack statistically in the ACC, but have allowed at least 40 points on three separate occasions this year. Former quarterback-turned-linebacker Chazz Surratt leads the team with 81 tackles and six sacks.

North Carolina won a thriller when the teams met last season in Chapel Hill. Howell’s 10-yard touchdown pass to Newsome with just over a minute to play served as the game-winner. Miami kicker Bubba Baxa missed from 49 yards away as with five seconds left as the Tar Heels prevailed, 28-25.

Miami had won the two prior meetings, including a 47-10 romp in the last meeting at Hard Rock Stadium. Saturday’s contest begins at 3:30 p.m. ET and airs on ABC.

Duke (2-8) at Florida State (2-6)
Saturday, Dec. 12 at 4 p.m. ET (ACC Network)
Florida State will take the field on Saturday for the first time in four weeks. The Seminoles will also get quarterback Jordan Travis back under center. Duke has committed a nation-leading 35 turnovers this season. The Blue Devils are 0-20 all-time against FSU.
Prediction: Florida State 34, Duke 27

LSU (3-5) at No. 6 Florida (8-1)
Saturday, Dec. 12 at 7 p.m. ET (ESPN)
Florida has already clinched a trip to Atlanta, but will need to beat LSU to keep its College Football Playoff hopes alive. LSU has already self-imposed a bowl ban. The Tigers will need to win to avoid a first losing season since 1999.
Prediction: Florida 45, LSU 21

Minnesota Vikings (6-6) at Tampa Bay Buccaneers (7-5)
Sunday, Dec. 13 at 1 p.m. ET (FOX)
The Tampa Bay Buccaneers will arrive at Raymond James Stadium on a 3-game home losing streak. Minnesota, on the other hand, has been one of the league’s hotter teams. The Vikings have won five of their last six games after a 1-5 start. The teams currently hold the final two Wild Card spots in the NFC.
Prediction: Tampa Bay 31, Minnesota 19

Tennessee Titans (8-4) at Jacksonville Jaguars (1-11)
Sunday, Dec. 13 at 1 p.m. ET (CBS)
The Jacksonville Jaguars have lost 11 straight games, but four of the last five have been decided by four points or less. Four of those were against teams currently at .500 or better. Stephen Gostkowski kicked the winning field goal with less than two minutes to play for Tennessee when the teams met in Nashville earlier this season.
Prediction: Tennessee 34, Jacksonville 17