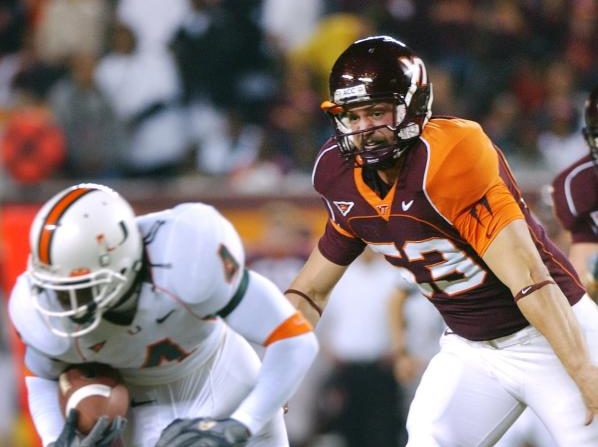 After years of dominating the Big East, the early parts of Miami and Virginia Tech’s tenure in the ACC looked to be more of the same.

In 2004, Virginia Tech beat Miami in the regular season finale in what was essentially a de facto ACC Championship to win the conference. The following year, the conference split into divisions and it appeared the annual meeting would decide the Coastal.

In what would be a top-5 showdown in Blacksburg, Miami put together a defensive performance for the ages. The Hurricanes blasted the Hokies at Lane Stadium, 27-7.

Since losing to rival Florida State in the season opener, Miami had won six straight football games as it arrived at Lane Stadium on Nov. 5, 2005. The Hurricanes have won five straight contests by at least 18 points and came in ranked No. 5.

Virginia Tech was 7-0 and ranked No. 3 in the country. Since edging NC State in the opener, the Hokies hadn’t played a game decided by fewer than 19 points. That streak would stay intact. Unfortunately, not the way that Virginia Tech had hoped.

Charlie Jones would rush for 97 yards and a touchdown for Miami, but the night belonged to the Hurricanes’ defense. Miami would force six turnovers and hold Virginia Tech to just 167 total yards.

It was a strip sack of Virginia Tech quarterback Marcus Vick by Miami’s Thomas Carroll that would set up the Hurricanes’ first points of the night — a field goal from Jon Peattie. Miami would lead 10-0 at halftime, thanks to Jones’ 1-yard touchdown run on fourth down to cap a 17-play, 82-yard drive that ate more than eight minutes off the clock.

Kelly Jennings would pick off Vick twice for Miami. After the Hurricanes added another Peattie field goal early in the second half, Vick’s second lost fumble led to another Miami touchdown. Quarterback Kyle Wright would cap a 57-yard drive with a 9-yard touchdown strike to Darnell Jenkins.

On the ensuing drive, the Miami defense would actually score points. Javon Nanton stripped Vick for the third time and Vegas Franklin fell on the football in the end zone to give the Hurricanes a 27-0 lead.

The Hokies would turn it over on each of their next two possessions. Vick’s fourth fumble of the night was followed by his second interception picked by Jennings. Virginia Tech would finally break up the shutout on the 2-yard touchdown run by Vick midway through the fourth quarter.

The victory for Miami would give the Hurricanes the inside track to the ACC Championship. Unfortunately for the Hurricanes, they were upset at home a week later by Georgia Tech, 14-10. Miami would finish the year 9-3 and with a blowout loss to LSU in the Peach Bowl.

Virginia Tech would not lose again during the regular season and would get back into the top 5. Unfortunately for the Hokies, they were upset by Florida State in the inaugural ACC Championship. They capped the year with a 35-24 win over Louisville in the Gator Bowl to finish in the top 10.

Virginia Tech would win the ACC in four of its first seven seasons as a member. It was 12 years later before Miami even reached the ACC Championship. That thought would have been unfathomable following a major victory that took place on this day 15 years ago.