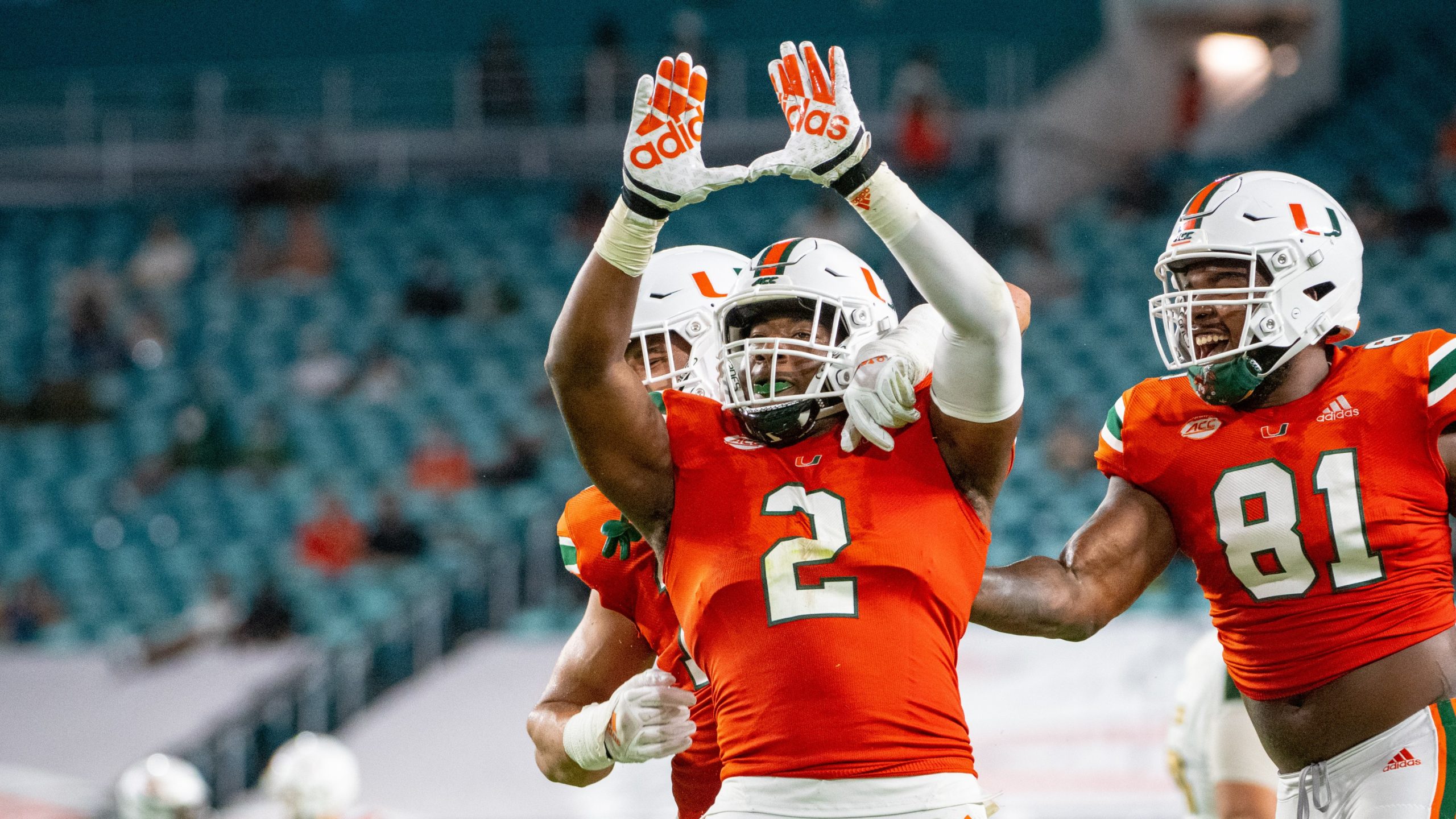 After winning their lone non-conferences games of the season, Miami and Louisville will square off in prime time for a top-20 match-up on Saturday.

No. 17 Miami started its season off on the right foot by pulling away from UAB for a 31-14 victory in the opener. Quarterback and Houston transfer D’Eriq King accounted for two touchdowns in his debut, but it was Cam’Ron Harris who ignited the ground attack.

Harris rushed for 134 yards for a Miami squad that finished with 337 yards rushing. Brevin Jordan remains one of the nation’s best tight ends for the Hurricanes and caught the team’s lone passing touchdown last week.

Although Greg Rousseau opted out of the season, the Hurricanes are still very good up front defensively. Temple transfer Quincy Roche tallied Miami’s only sack last week against the Blazers.

Louisville quadrupled its win total in year No. 1 under head coach Scott Satterfield. The 18th-ranked Cardinals started the season with a 35-21 win over Western Kentucky.

Micale Cunningham seemed to show good progress as a passer, throwing for 343 yards in the opener. Cunningham is surrounded by a talented group of skill players.

The junior quarterback can compliment Javian Hawkins and Hassan Hall in the ground game. Out wide, Tutu Atwell, Dez Fitzpatrick and Braden Smith make for a talented trio of receivers. Fitzpatrick and Smith each finished with four catches for 110 yards last week.

Saturday’s contest will be the first between the teams in Louisville since Labor Day 2014. The Cardinals have won the last two meetings at home. The contest begins at 7:30 p.m. ET and will air on ABC.

No. 14 UCF (0-0) at Georgia Tech (1-0)
Saturday, Sept. 19 at 3:30 p.m. ET (ABC)
Georgia Tech opened the win with a statement win over Florida State. The Yellow Jackets head home for the first time for what should be a tougher challenge in UCF. The Knights are 35-4 over the last three seasons and return a deep and talented backfield headlined by quarterback Dillon Gabriel.
Prediction: UCF 30, Georgia Tech 20

Jacksonville Jaguars (1-0) at Tennessee Titans (1-0)
Sunday, Sept. 20 at 1 p.m. ET (CBS)
Jacksonville and Tennessee are coming off thrilling victories in Week 1 and will meet in a battle for first place in the AFC South. Jaguars’ quarterback Garder Minshew misfired on fewer passes last week than Tennessee kicker Stephen Gostowski did field goals. The Titans have won five of the last six in the series.
Prediction: Tennessee 23, Jacksonville 13

Buffalo Bills (1-0) at Miami Dolphins (0-1)
Sunday, Sept. 20 at 1 p.m. ET (CBS)
Ryan Fitzpatrick will look to bounce back from a 3-interception performance last week for the Miami Dolphins in a loss to the New England Patriots. The Buffalo Bills will eye a second straight 2-0 start. Buffalo has won the last three against the Dolphins.
Prediction: Buffalo 24, Miami 14