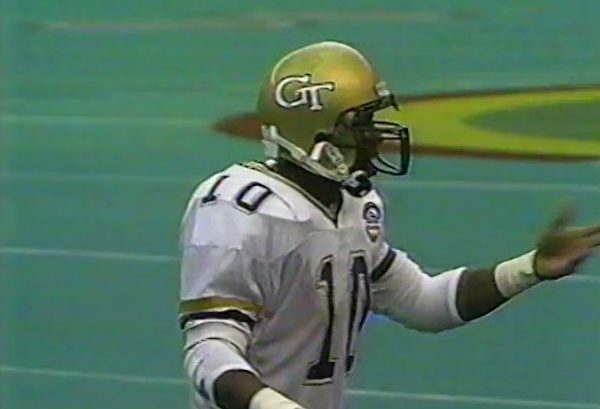 This year’s canceled Hawaii Bowl between Hawaii and Memphis would have been the 20th such contest.

Before the Hawaii Bowl however, the bowl contest played in Honolulu was known as the Aloha Bowl. There were 19 Aloha Bowl contests, but only two decided by a single point.

The last of those came on this day 30 years ago. A big punt return would set up a late touchdown run and 2-point conversion as Georgia Tech stunned Stanford, 18-17.

After winning the national championship in 1990, the 1991 season did not go as swimmingly for Georgia Tech. The Yellow Jackets started just 3-4, but won four straight games before dropping the regular-season finale to Georgia. Georgia Tech was 7-5 as it arrived at Aloha Stadium on Dec. 25, 1991.

Stanford had also overcame a slow start. After a 1-3 start, the Cardinal had won seven straight games to close the regular season. Stanford arrived with an 8-3 record and a No. 17 national ranking.

One stop was all that separated Stanford from a victory to close out the season. The Cardinal led 17-10 and were in Georgia Tech territory when they faced fourth down with less than two minutes remaining.

Typically, punts that landed inside the 10-yard-line were not returned, but Georgia Tech’s Willie Clay defied conventional wisdom. Instead, he took Aaron Mills’ punt at the 6-yard-line. After a key block, Clay made his way down the sideline for an Aloha Bowl-record 63 yards to the Stanford 31.

Runs for first downs by quarterback Shawn Jones and running back Jimmy Lincoln set the Yellow Jackets up inside the Stanford 5-yard-line. Two plays later, Jones scored on a 1-yard keeper with 14 seconds remaining. Head coach Bobby Ross elected to go for two and the win.

On the game’s decisive play, Lincoln took a pitch to the right and dove into the end zone for the go-ahead score. It gave Georgia Tech a third straight bowl win.

Prior to the final seconds, all of Georgia Tech’s points had come in the opening quarter. A 6-yard touchdown run by Stanford’s Tommy Vardell less than three minutes in got the scoring started.

After Mills’ 38-yard field goal tied the game, Vardell’s second touchdown run — a 2-yard rush — gave the Cardinal a 17-10 lead at the break. Neither team scored in the third quarter. Vardell rushed for a game-high 104 yards in the loss.

Despite the Georgia Tech victory and both teams finishing with eight wins, only Stanford finished ranked. The Cardinal finished No. 22 in the final AP Poll.

Following the games, both head coaches would accept jobs in the NFL. Ross became head man of the San Diego Chargers while Stanford’s Dennis Green was tabbed by the Minnesota Vikings. Their final meeting as college coaches was an absolute thriller on Christmas Day three decades ago.