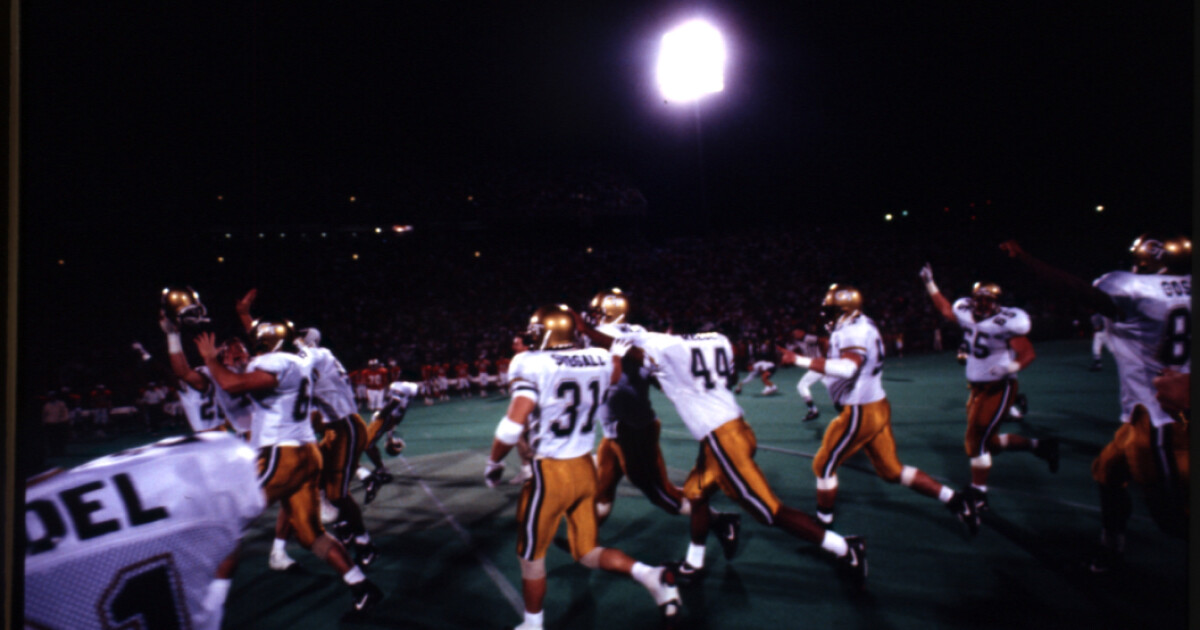 The 1990 season will long be one to remember for Georgia Tech.

During the campaign, the Yellow Jackets went undefeated with one tie. There were a lot of nail-biting moments and close calls along the way.

The biggest statement game of the regular season for Georgia Tech may have come on this day 30 years ago. The Yellow Jackets erased a 14-point deficit to beat No. 1 Virginia on Scott Sisson’s last-second field goal, 41-38.

At 6-0-1, Georgia Tech was just two weeks removed from a tie as it arrived at Scott Stadium on Nov. 3, 1990. Despite being without a loss, the Yellow Jackets entered the game ranked just No. 16 in the AP Poll.

Topping that poll at 7-0 was Virginia. The Cavaliers had not played a game decided by fewer than 13 points and held a 3-game winning streak over the Yellow Jackets. For a half, running that streak to four seemed inevitable.

Early on, things couldn’t have gone much better for Virginia. The Cavaliers led 10-0 after the first quarter and 28-14 at halftime.

In the third quarter, it was the Georgia Tech defense that came to life. After recovering a fumble on Virginia’s opening drive of the second half, Gilchrist scored from 12 yards out to cut the lead to 28-21.

The Cavaliers looked as though they would march right back down the field, but Calvin Tiggle thwarted Virginia’s scoring opportunity with an interception in the red zone. For the first time since the contest was scoreless, the Yellow Jackets drew even on a 26-yard scoring strike from Jones to Emmett Merchant.

It didn’t take long for Virginia to regain the lead on Moore’s 48-yard touchdown pass to All-American wide receiver Herman Moore. But before the third quarter was over, Georgia Tech again drew even. William Bell’s 8-yard touchdown run with two seconds to go knotted the game at 35.

Georgia Tech took its first lead on Sisson’s 32-yard field goal in the fourth, but Virginia would later answer. It appeared as first though that the Cavaliers had a more significant answer.

Down 38-35 and facing 3rd-and-goal from the 1-yard-line with three minutes to play, Virginia appeared to have regained the lead on Shawn Moore’s short scoring toss to tight end Aaron Mundy. Unfortunately for the Cavaliers, illegal procedure was called. After the third down pass attempt was knocked away, Jake McInerney’s third field goal of the day tied the game 38-38 with 2:30 to play.

On the decisive drive, Jones was precise with key completions to Bell and Greg Lester, totaling 38 yards. Bell added a 13-yard run on the drive as the Yellow Jackets went 56 yards in five plays. With time ticking away, on came Sisson.

From 37 yards away, Sisson calmly knocked through the go-ahead field goal with seven seconds to play. Georgia Tech had defeated the No. 1 Cavaliers, 41-38.

A career-day from Shawn Moore, who passed for a Virginia record 344 yards, wasn’t enough to hold off Georgia Tech. Herman Moore caught nine passes for 234 yards in the loss. The Cavaliers beat North Carolina a week later, but would drop their final three games to finish 8-4.

As for Georgia Tech, it would run the table en route to being named national champions by the Coaches Poll. The Yellow Jackets used another Sisson field goal late the following week to beat Virginia Tech. They concluded the year with blowout wins over Wake Forest, Georgia and then Nebraska in the Citrus Bowl.

Following the win over Virginia, Georgia Tech ascended to No. 7 in the polls. Until the final Coaches Poll following a 45-21 win over the Cornhuskers in Orlando, the Yellow Jackets were never No. 1. They would beat No. 1 prior to that however, and they did so on this day three decades ago.