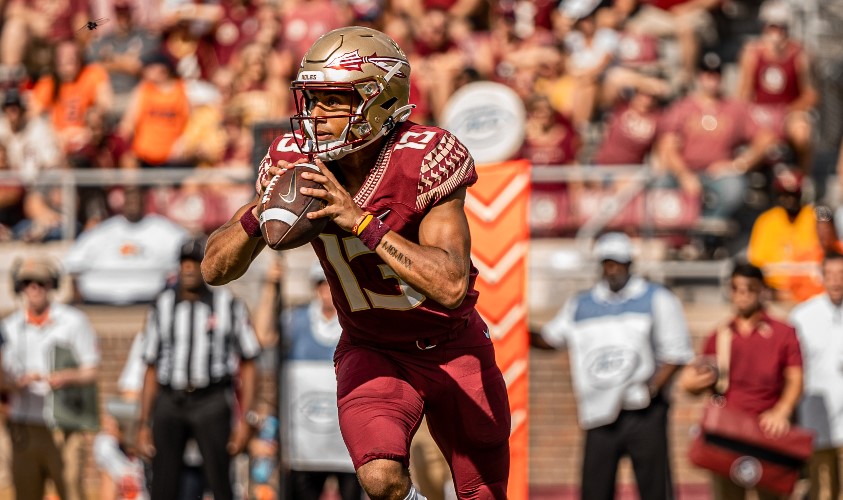 For Florida State, the start of fall camp is here, which means we are inching closer to the start of the college football season.

Fall camp begins on Wednesday for the Seminoles. Entering his third year as head coach, Mike Norvell is just 8-13 at FSU.

Off a disappointing 5-7 season, the team is looking to turn things around. As we navigate to the start of camp, here are five things to watch:

1. Will Travis Take the Next Step as a Passer?

A West Palm Beach (Fla.) native, FSU quarterback Jordan Travis finished the 2021 season on a high note. Known largely for his rushing ability for most of his career, Travis averaged 242.3 passing yards with seven total touchdowns and only one interception over the last three games of his redshirt sophomore campaign.

We know Travis can make plays with his legs, but he showed tremendous improvement as a passer last season. If that trend can continue, he could emerge as one of the top quarterbacks in the ACC.

2. Who Will Emerge as the Top Receiver?

2021 was a season to forget for the Florida State wide receiving corps. Leading receiver Ontaria Wilson finished with just 23 receptions for 382 yards and five touchdowns.

The talk of the offseason has been the acquisition of the four wide receiver transfers: Winston Wright Jr., Mycah Pittman, Johnny Wilson and Deuce Spann. These wide receivers combined for 92 receptions for 1,163 yards and eight touchdowns during the 2021 season. With a diverse set of skills, FSU could be much better out wide in 2022.

Florida State doubled down on its recruiting efforts along the offensive line. Between transfers and incoming freshmen, FSU will welcome in 10 new faces at the position group.

With that said, there are four returning key contributors from last season (Dillan Gibbons, Maurice Smith, Darius Washington and Robert Scott Jr). However, the offensive line was riddled with injuries all season. With an influx of new talent, this could be the deepest the Seminoles have been at the position in a long time.

4. How Will the DL Fare Without Johnson and Thomas?

The Seminoles were fortunate to have the services of the dynamic defensive end duo of Jermaine Johnson II and Keir Thomas in 2021. Those two talented pass rushers combined for 18 of FSU’s 33 total sacks last season.

Both players have exceeded their eligibility and moved on to the NFL. The Seminoles are now tasked with trying to replace that production.

Redshirt sophomore Derrick McLendon II is the returning sack leader (3.5 sacks) from a season ago. The coaching staff also acquired highly-sought Albany transfer Jared Verse, who had 9.5 sacks with the Great Danes in 2021.

5. Will the Special Teams Unit Turn it Around?

Florida State’s special teams unit ranked just 126th in the Fremeau Efficiency Index ratings last season. With 130 FBS teams, that isn’t good. The Seminoles will be returning its starting kicker and punter in Ryan Fitzgerald and Alex Mastromanno, respectively, but will be searching for a sense of consistency in the return game.

Fortunately, the coaching staff acquired Wright (23 kickoff returns for 618 yards and one touchdown) and Pittman (15 punt returns for 151 yards) via the transfer portal. Both have collegiate experience in that aspect.

With the uncertainty of Wright’s injury, things begin to get a bit dicey for kick returners. During Tuesday’s media session, Norvell mentioned Spann, Trey Benson, Sam McCall and Azareye’h Thomas as potential candidates for that role.