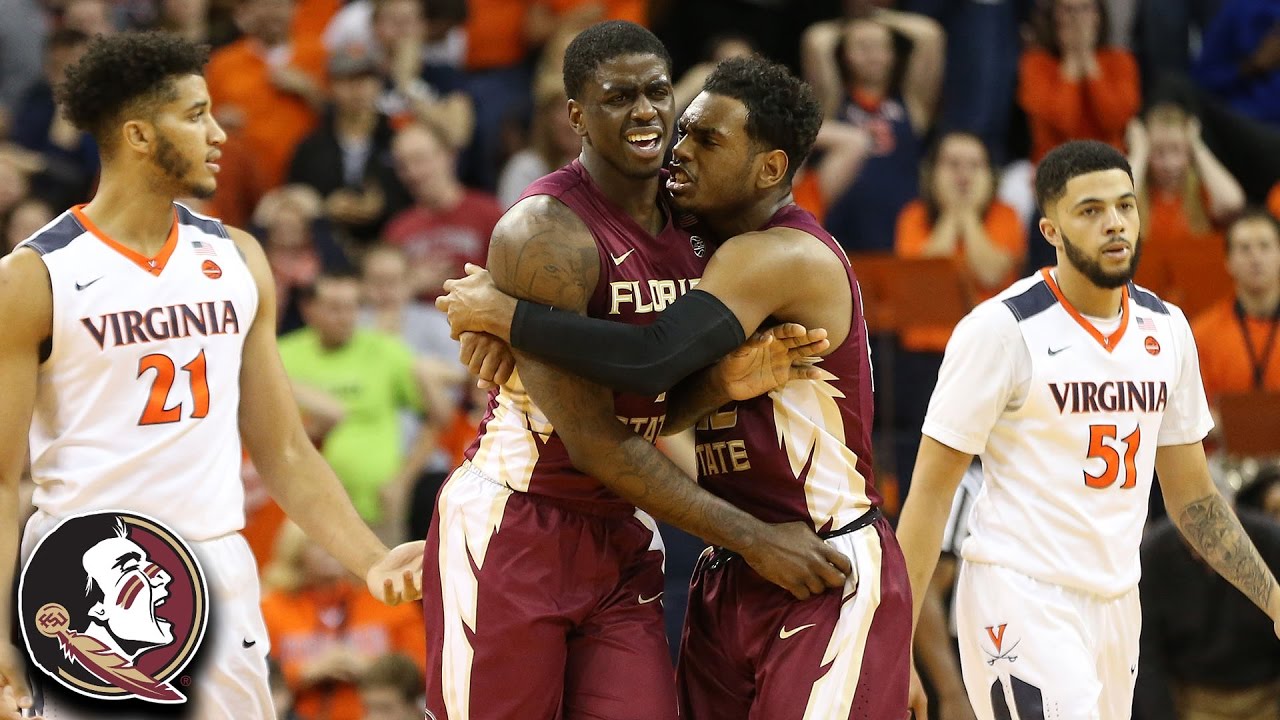 There was a time when it would have seemed unthinkable, but Florida State and Virginia have each become ACC basketball powers in recent years.

There have been some thrillers over the years between the schools. That was the case on this day five years ago.

In search of a signature win, FSU held off a late rally by the Cavaliers. Virginia took a late lead, but Dwayne Bacon’s last-second 3-pointer was the difference as the Seminoles prevailed, 60-58.

FSU was off to a 13-1 and ranked No. 20 as it arrived at John Paul Jones Arena on Dec. 31, 2016. The Seminoles were looking to start 2-0 in ACC play and for their first win in Charlottesville in four years.

Virginia was ranked 12th and 11-1 overall. The Cavaliers were coming off an impressive road win over No. 6 Louisville.

Bacon Wins it for FSU

Virginia led 30-23 at halftime, but for most of the second half, it went back and forth. Bacon’s 3-pointer with less than 10 minutes remaining gave FSU a 45-44 lead. From there, the contest featured one tie and five lead changes.

The Seminoles seemed in control after a 9-0 run gave them a 56-51 lead with less than two minutes to play. Bacon scored the final seven points of the run.

Virginia however, refused to go quietly. Baskets by Isaiah Wilkins and Devon Hall cut the lead to 57-55. FSU’s Jonathan Isaac, who had split a pair of free throws on his previous trip, then missed the front end of a 1-and-1 with 22 seconds remaining.

FSU needed a stop to win, but Kyle Guy was able to get just enough daylight from the corner. His contested 3-pointer gave Virginia a 58-57 lead with just 8.8 seconds remaining.

With one last possession, the ball would be put in Bacon’s hands. Without a timeout, Bacon took it the distance for the Seminoles. His pullup 3-point shot was buried with just two seconds left. Virginia would not get a shot off as FSU prevailed.

Bacon’s game-winner capped a career-high 29-point afternoon. 26 of those points came after halftime.

Virginia shot 45% from the field to just 41% for FSU, but the Seminoles made nine more free throws in the win. In addition to Bacon’s monster day, Xavier Rathan-Mayes added 10 points in the win.

Guy paced Virginia with 14 points. Hall, Marial Shayok and London Perrantes all added 10 in the loss.

Following the win, FSU found itself ranked in the top 15. The Seminoles would go 26-9 and undefeated at home before falling to Xavier in the second round of the NCAA Tournament. The signature road win from the 2016-17 season for FSU came courtesy of Bacon and on this day five years ago.