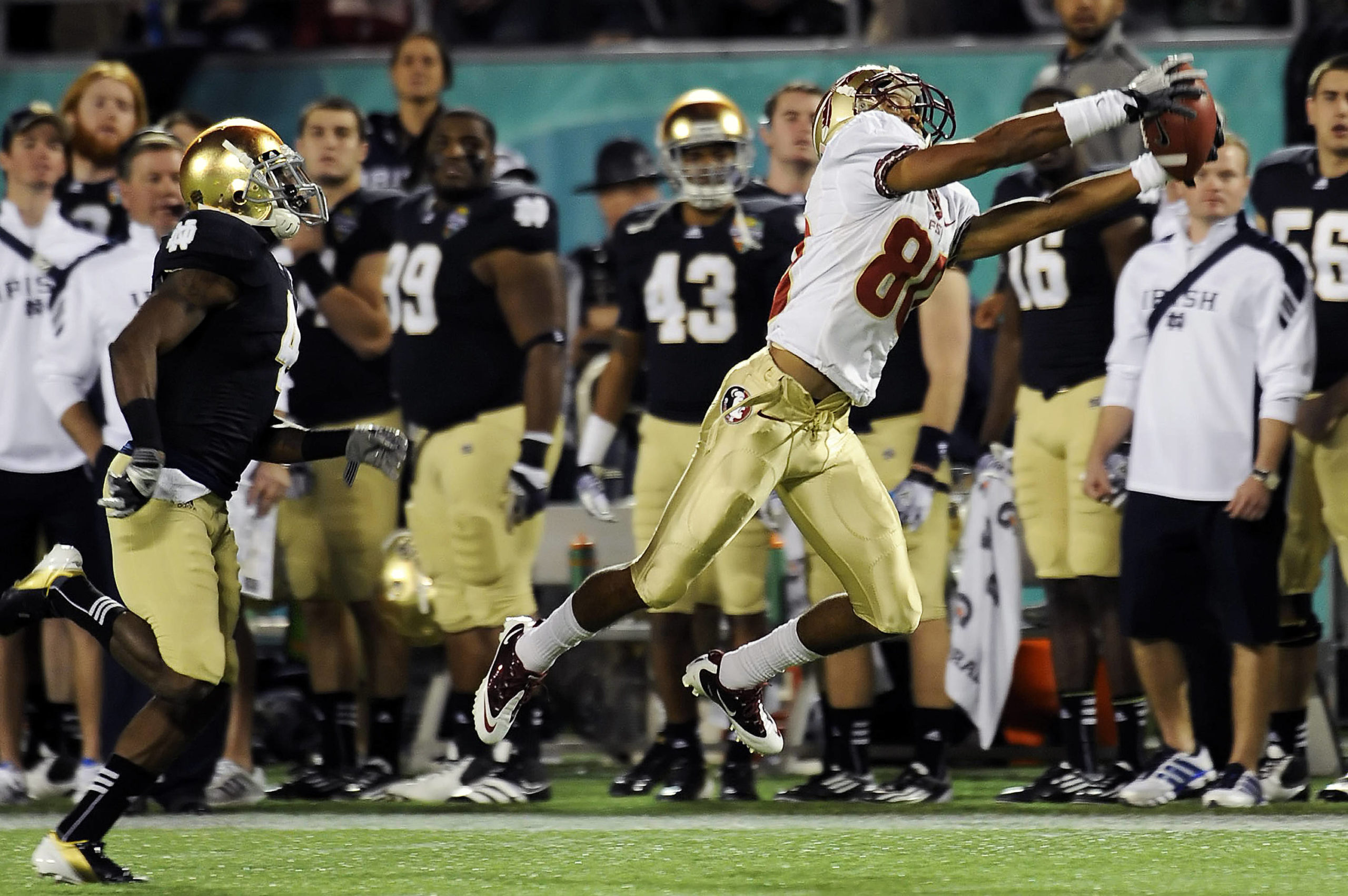 Florida State and Notre Dame have met just 11 times, but those contests tend to be good ones. Seven have been decided by seven points or less.

The 1993 “Game of the Century” stands out among the matchups, but there was another good one that took place on this day 10 years ago.

In just the second bowl meeting between the teams, FSU finished strong. The Seminoles scored the game’s final 18 points to stun the Fighting Irish in the Champs Sports Bowl, 18-14.

FSU entered the Champs Sports Bowl as winners of six of seven following a 2-3 start. Notre Dame had won four straight before closing the regular season with a loss at Stanford.

For one half, a defensive touchdown had accounted for the game’s only points. Notre Dame’s Zeke Motta had returned a Devonta Freeman fumble 29 yards for a touchdown less than six minutes in to give the Fighting Irish a 7-0 lead.

On the opening drive of the second half, Notre Dame doubled its advantage as Michael Floyd made a juggling catch on a Tommy Rees’ pass. FSU trailed 14-0, but found a spark as Lamarcus Joyner returned the ensuing kickoff 77 yards. Any momentum that the Seminoles may have had however, fizzled as they were forced to settle for a Dustin Hopkins field goal.

After a rough first half and start to the third, the FSU offense finally got it going late in the third quarter. The Seminoles mounted a 10-play, 84-yard march. On the first play of the final quarter, FSU’s EJ Manuel found Bert Reed for an 18-yard touchdown.

The failed 2-point conversion kept the FSU deficit at 14-9, but it didn’t take long for the Seminoles to take the lead.

FSU would add a field goal on the next drive, thanks largely to a diving 42-yard catch from Greene, who finished with a game-high 99 yards receiving. With less than four minutes to go however, Notre Dame was in prime position to win.

The Fighting Irish started inside the FSU 30-yard-line. After a first down and then a holding penalty, Rees took a shot to the end zone. There for the game-sealing interception was Florida State safety Terrence Brooks.

Neither team finished with 300 yards of offense in the contest and both were held to fewer than three yards per rush. Manuel passed for 249 yards for FSU. In addition to Brooks and Bradham, Joyner also had an interception for the FSU defense.

Thanks to the comeback, FSU would finish 9-4 and No. 23 in the final polls. The Champs Sports Bowl win was the fifth straight bowl victory for the Seminoles and the biggest bowl comeback at the time. It came on this day a decade ago.