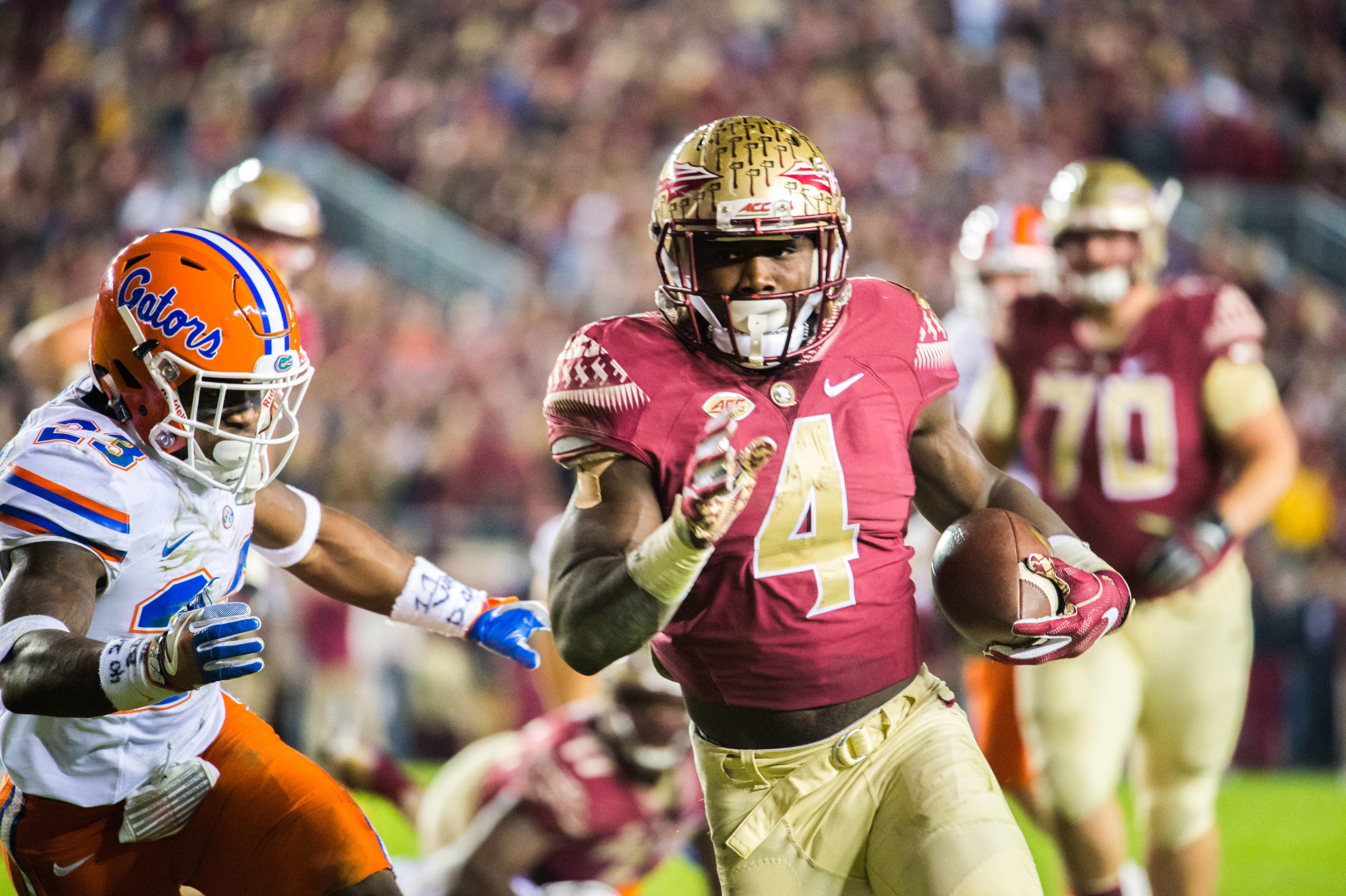 It’s the eve of the annual rivalry contest between Florida and Florida State.

While the contest hardly has any implications of significance on a national level, Sunshine State bragging rights are at stake. That was also the case on this day five years ago as the schools met in Tallahassee as top-15 teams.

When all was said and done, FSU left little doubt who reigned supreme. The Seminoles romped to a 31-13 victory.

Florida was 8-2 and ranked 14th as it was looking for its first win over the Seminoles in four years. That was not to be as FSU tied its longest winning streak over Florida with its fourth straight win in the series.

Things actually got off to a promising start for Florida’s struggling offense as it reached the FSU 2-yard-line on the opening march. On 4th-and-goal however, head coach Jim McElwain elected to go for it. Under pressure, quarterback Austin Appleby was unable to find anyone open and the Seminoles took over on downs.

After a missed field goal by FSU and a Florida fumble, FSU took advantage of a short field. It took just two plays for All-American Dalvin Cook to go 17 yards for a touchdown and the game’s first points.

The teams traded field goals for the rest of the first half and the Seminoles took a 10-3 lead into the locker room. An interception of FSU quarterback Deondre Francois by Florida’s Chauncey Gardner would set up a field goal to cut the lead to 10-6 in the third quarter.

That’s as close as the Gators would get.

The next two FSU drives each lasted nine plays and covered 152 total yards. Both culminated in touchdowns.

A 46-yard touchdown pass from Francois to Travis Rudolph and a 27-yard touchdown run by fullback Freddie Stevenson helped the Seminoles build a commanding 24-6 lead.

Florida would finally found the end zone early in the fourth as Marcell Harris scored on a muffed punt, but that would be one of the few highlights the rest of the way. After an exchange of punts and turnovers, Francois put the game away by scoring on an 8-yard keeper in the final minute.

For a handful of FSU players, it was a night to remember, including two Consensus All-Americans. Cook finished with 153 yards rushing in the victory. Senior defensive end DeMarcus Walker tallied two sacks and a pair of fumble recoveries.

The Seminoles dominated statistically with 387 yards to just 207 for Florida. Brian Burns and Josh Sweat each tallied 1.5 sacks in the victory. Derrick Nnadi also added a sack. Sweat recorded a team-high tying seven tackles and a game-high 2.5 tackles for loss.

For Florida, the loss would serve as its second loss in four games after a 6-1 start. The Gators would lose to Alabama in the SEC Championship the following week before topping Iowa in the Outback Bowl to finish 9-4.

The win for FSU was its fourth straight as the Seminoles closed the year on a 5-game winning streak. Florida State topped Michigan in the Orange Bowl to finish 10-3 and in the top 10 for a fifth straight season.

FSU would go on to beat Florida the following season for a school-record fifth straight time in the series. Its most recent win over the Gators in Tallahassee came on this day five years ago.