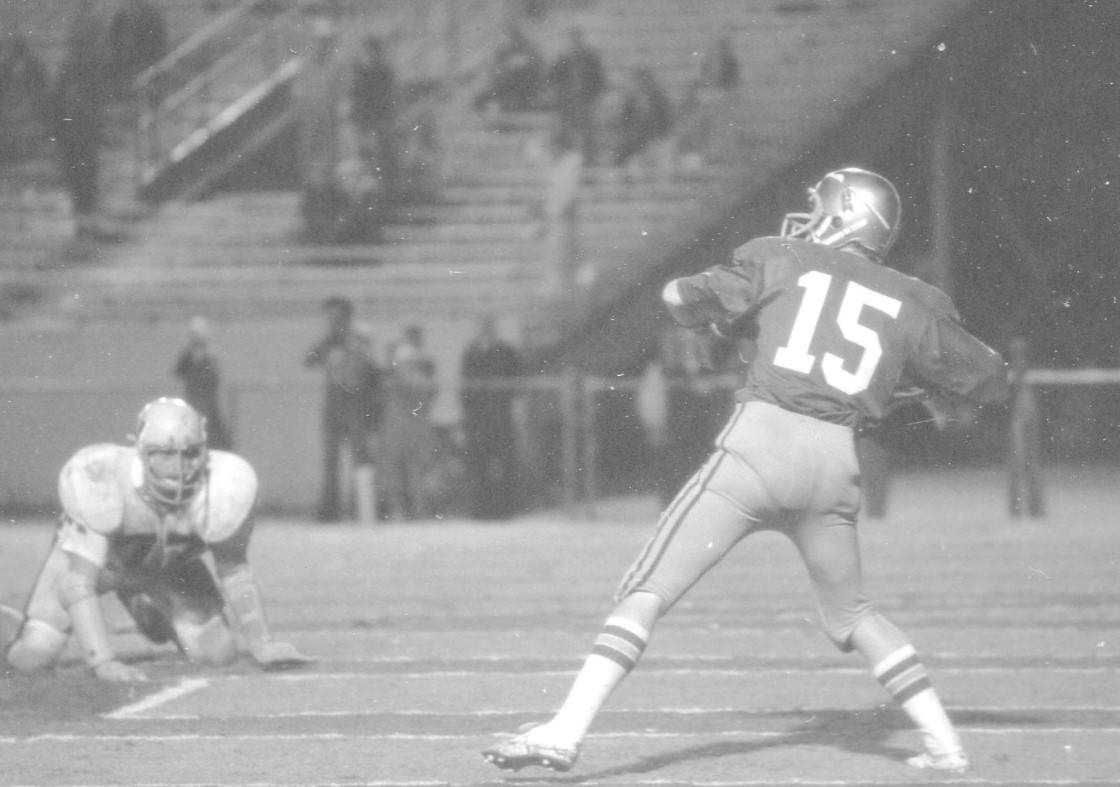 The Seminoles closed the 5-6 campaign with three straight wins — all fourth-quarter comebacks. The final of those victories came on this day 45 years ago.

Quarterback Jimmy Jordan threw two touchdowns in the fourth quarter, including one that set a school record at the time to lead the comeback as FSU topped Virginia Tech, 28-21.

After a 2-6 start to the Bowden era, FSU had won consecutive games at it arrived at Doak Campbell Stadium on Nov. 20, 1976. After comeback wins over Southern Mississippi and North Texas State, the Seminoles were set to host Virginia Tech in the regular season finale.

The Hokies were heading in a different direction. After starting 6-2 under third-year head coach Jimmy Sharpe, Virginia Tech had lost consecutive games. It was looking to avoid a 3-game losing streak to close the season.

Long touchdowns would be a theme for FSU throughout the day. The Seminoles’ first and last touchdowns broke school records.

FSU took its first lead late in the first quarter when Larry Key rushed for a school-record 97-yard touchdown to make it 7-6. The Seminoles pushed the lead to 14-6 in the second when Jimmy Black hit Mike Barnes for a 75-yard touchdown.

Virginia Tech however, answered. The Hokies used touchdown runs from Paul Adams — his second of the day — and Roscoe Coles to take a 21-14 lead into the fourth quarter.

The final period was less than three minutes old when the Seminoles found the end zone. On what would be the shortest FSU touchdown of the day, Jordan threw his first touchdown pass. His 33-yard connection with Jackie Flowers cut the lead to one, but after a failed 2-point conversion attempt, that is where it stayed.

With more than six minutes to play, Virginia Tech was on the verge of making things real difficult on FSU. The ensuing drive lasted 17 plays and reached the FSU 9-yard-line before a Coles fumble gave the Seminoles new life. Walter Carter recovered for FSU at the 4-yard-line.

Needing just a field goal to take the lead, FSU needed just one play to go ahead for good. On the first play of the ensuing drive, Jordan dropped back into his own end zone and heaved one. Wide receiver Kurt Unglaub got behind the Virginia Tech defense and was able to catch the ball in stride on his way to a school-record 96-yard touchdown reception.

With less than six minutes to go, Black came in and found Ed Beckman for the 2-point conversion. With all of the momentum, the FSU defense proceeded to force a 3-and-out and the Hokies never saw the ball again.

Statistically, it was domination in FSU’s favor. The Seminoles put up 517 yards to 394 for Virginia Tech.

The school-record 96-yard bomb from Jordan to Unglaub bested Rudy Thomas’ school record set just two weeks prior against Southern Miss. It would last for 24 years before Chris Weinke and Marvin “Snoop” Minnis connected for a 98-yard touchdown against Clemson in 2000.

The connection between Jordan and Unglaub however, also served as the game-winner. It took place on this day 45 years ago.