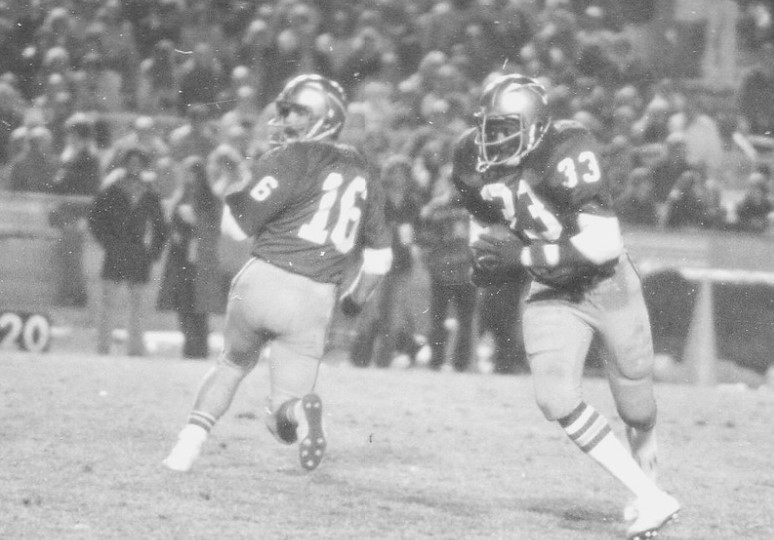 The season started miserably, but finished strong. FSU closed the year on a 3-game winning streak.

That streak started on this day 45 years ago with an improbable victory. Florida State’s Rudy Thomas scored three touchdowns in the final quarter as the Seminoles rallied from 17 points down to stun Southern Mississippi, 30-27.

Florida State was in the midst of its second 3-game losing streak of the season as it arrived at Doak Campbell Stadium on Nov. 6, 1976. FSU was just 2-6 and had let a fourth-quarter lead slip away the week prior in a 15-12 loss to Clemson.

Southern Miss however, seemed like a team that FSU should beat. The Golden Eagles were 0-8, but through three quarters, they had thoroughly dominated the contest.

The nail in the coffin looked to have been delivered by Southern Mississippi as Ben Garry scored from seven yards out with just 13 seconds left in the third quarter. That gave the Eagles a commanding 27-10 lead as FSU was on the verge of falling to 2-7.

A senior from Quincy, Thomas was playing in his next-to-last game at home for the Seminoles. The final quarter was less than four minutes old when Thomas scored on a reverse for a 10-yard touchdown.

After forcing a 3-and-out, FSU marched 83 yards in 10 plays to cut the lead to four. On 3rd-and-2 from the Southern Mississippi 4-yard-line, Thomas got the call and powered his way into the end zone. The 2-point try was no good with less than seven minutes to play.

Down 27-23, FSU forced another 3-and-out, but seemed to be in a no-win situation. The Golden Eagles pinned FSU back inside its own 10-yard-line with less than five minutes to play. After Thomas was stuffed for a loss of three and an incomplete pass from Jimmy Black, FSU faced 3rd-and-13 from its own 5.

Black dropped back to pass before dumping it off to Thomas. Thomas did the rest, weaving his way through tacklers before outrunning defenders on his way to an electrifying 95-yard touchdown.

FSU had the lead, but with 4:05 remaining, Southern Miss had time. The Golden Eagles marched inside the FSU 35-yard-line on their final drive, but on 4th-and-11, Ken Alderman’s pass to Curtis Dickey did not reach the sticks.

FSU made the tackle and completed the comeback.

Florida State actually had a pair of leads in the first quarter. Dave Cappelen got the scoring start for FSU with a 37-yard field goal. After Southern Miss answered with a touchdown pass from Chuck Clancy to John Pitts, FSU found the end zone for the first time on Black’s 15-yard touchdown pass to Ed Beckham.

The Seminoles led 10-7 after one, but wouldn’t score again until the final quarter. Dickey and Garry each scored rushing touchdowns in the second period to give the Golden Eagles a 20-10 lead at the break. Both would finish with more than 100 yards rushing in the loss.

Thomas rushed for just 11 yards, but led the Seminoles with 115 yards receiving. Black passed for 351 yards and FSU, as a team, threw for 420. Aaron Carter led the FSU defense with 11 tackles.

For Southern Mississippi, the loss would not prove demoralizing. After falling by one point to Louisiana Tech the next week, the Golden Eagles won their final two games to finish 2-9.

For FSU, the comeback victory was the first of three straight to end the year. The Seminoles also rallied past North Texas State and Virginia Tech in the final two weeks to finish 5-6. The most improbable of their victories from that season came on this day 45 years ago.