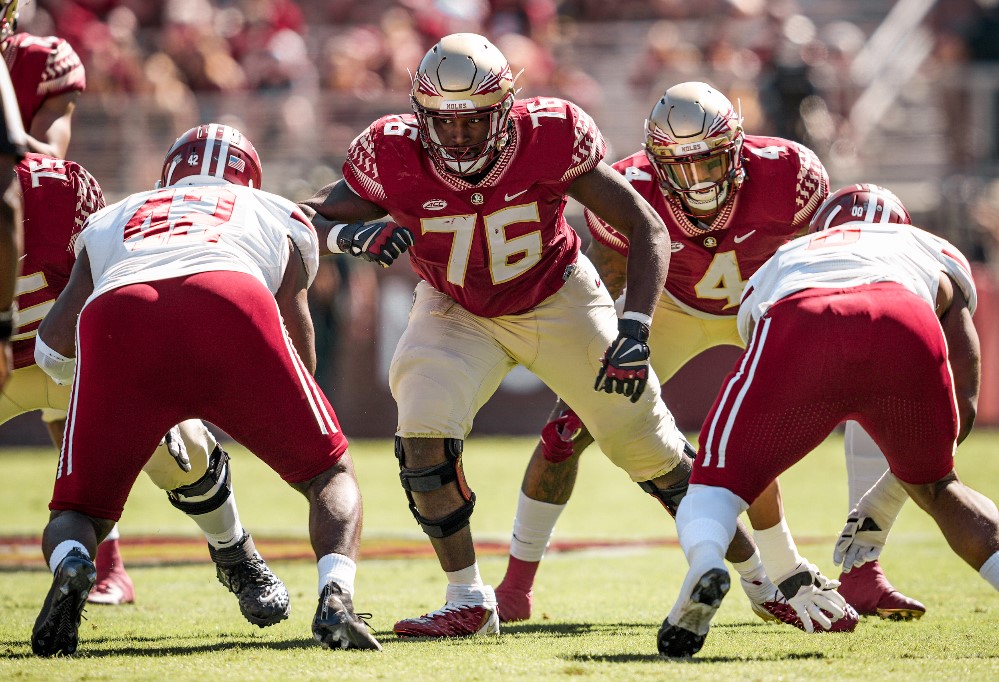 If anyone had claimed in the preseason that Florida State would have a real chance at beating Clemson in Death Valley, they probably would have been laughed at.

Now, that possibility is very much a reality. Clemson is seemingly in a downward spiral, and FSU is riding its first three-game winning streak since 2017.

The Seminoles will be attempting to halt a five-game losing streak to the Tigers.

Despite Clemson’s recent success, FSU still leads the all-time series, 20-13. The Tigers won their last matchup in 2019 against the Seminoles, 45-14.

What Is Happening in Clemson?

A preseason favorite to reach a seventh straight College Football Playoff, Clemson is now 4-3 and has been essentially eliminated from playoff contention. What happened?

For starters, the Tigers lost three-year starter and record-breaking running back Travis Etienne to the NFL Draft. In addition, Clemson had to replace Heisman Trophy runner-up and generational quarterback Trevor Lawrence, who happened to be the top overall pick in the NFL Draft.

The Tigers are banged up across the board, and have not had the production they expected out of their offensive unit.

Former five-star quarterback and current sophomore D.J. Uiagalelei’s decision-making has been suspect, and teams are forcing him to win games with his arm.

Clemson has not been able to score more than two touchdowns in regulation against an FBS opponent this season. ESPN’s SP+ rankings have Clemson’s offense at 35th.

Despite the offensive struggles, defensive coordinator Brent Venables has the Tiger defense rolling. Clemson’s defense is third in the country, and is by and large, carrying the team.

The ‘Noles are on a tear since starting the season with four straight losses. After eking out a 33-30 victory against Syracuse, they dominated North Carolina 35-25 on the road, then returned home to obliterate Massachusetts, 59-3.

Confidence is at a season-high in Tallahassee. Three straight solid offensive performances have seen the ‘Noles bounce back from 61st to 19th, according to ESPN’s SP+ rankings.

The Seminoles have eclipsed 200 yards rushing in six of their seven games — the first time that has happened since 1995.

Defensively, the ‘Noles continue to show improvements as well.

After allowing a season-low three points against UMass, Florida State’s defense has jumped to 53rd. This marks an 18-point climb since its last game against North Carolina.

For Mike Norvell’s Seminoles to march into Death Valley and secure a victory is no small task. ESPN’s advanced metrics only gives Florida State a 14.8% chance to do so.

FSU only had a 10.2% chance to beat North Carolina on the road.

In order to pull off the upset, Florida State needs to do three things correctly.

Firstly, quarterback Jordan Travis needs to hit the handful of shot plays that will be available. Clemson will likely sell out to stop the run, which should open up the deep passing game. The ‘Noles have to capitalize to stay close.

Secondly, the Seminole defense needs to force the Tigers to try and win through the air. Uiagalelei has struggled as a passer thus far, so the ‘Noles will need to force him to continue to make mistakes.

Finally, the ‘Noles have to win the field position battle. FSU’s offense will not be able to consistently sustain drives against Venables’ defense. Getting short fields will be key to offensive success.

Mike: Clemson, 24-17. Although Clemson is not its usual dominant self this season, this would still be a huge win for Florida State as a program. After its first 0-4 start since 1974, the Seminoles have stormed back with three straight victories. Clemson is terrible offensively, but stellar defensively. Despite FSU’s improvement on each side of the ball in recent weeks, it’s still going to be tough for the Seminoles to go into Death Valley and leave with a victory.

Cory: Clemson, 31-17. I don’t care that Clemson is struggling offensively. FSU still can’t block its defensive line, and that’s going to be a problem.

Jake: FSU, 24-21. I have been pessimistic about picking FSU after Jacksonville State. These are not the same ‘Noles. Clemson still doesn’t have an identity at this point, but the Seminoles know who they are. FSU will line up and hit them in the mouth. Can the Tigers muster the motivation to stop FSU?