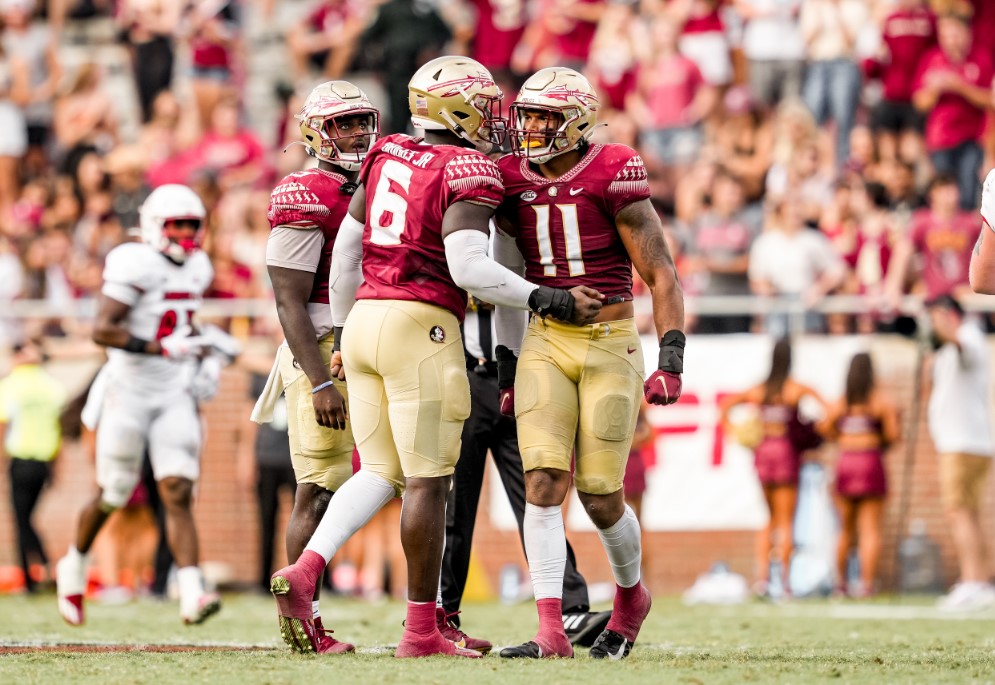 Florida State is just 2-4 at midseason, and has not had a good defense up to this point.

However, the Seminoles seem to be growing. They recently allowed their fewest points to an FBS opponent so far in a 35-25 victory at North Carolina to close the first half of the season on Oct. 9.

Mississippi State transfer Fabien Lovett is in year two of development under defensive line coach Odell Haggins’ tutelage, and he is showing it. The redshirt sophomore has been an effective run-stopper, posting his highest PFF grade of 74.8 in run defense.

Lovett has 18 tackles and a sack on the year, with nine quarterback hurries.

Georgia transfer Jermaine Johnson II has easily been FSU’s most dominant pass rusher this season. The redshirt senior is currently tied for first in the country in sacks from the defensive end position with 6.5.

When he’s not getting sacks, quarterbacks are still feeling his presence. Johnson has 11 quarterback hurries and two pass deflections thus far. He also ranks second for FSU in total tackles with 44 on the season.

He has been surprisingly effective in coverage as well, posting a grade of 71.6.

Another player on the long list of Haggins’ development acumen, redshirt junior Robert Cooper has shined this season. Cooper’s 6-foot-2, 338-pound frame has earned him the nickname “The Trench Monster”, and it is well-deserved.

The massive defender uses his size and strength to plug running lanes alongside Lovett. While he only has a half-sack on the year, Cooper has 21 tackles. His run defense grade of 80.3 is the highest on the team.

Head coach Mike Norvell spoke last week about how much FSU asks safety Jammie Robinson to do on defense. He is versatile and experienced, so defensive coordinator Adam Fuller has been using Robinson in every way imaginable.

The South Carolina transfer possesses FSU’s highest tackle grade at 90.3, as well as its highest coverage grade at 76.6. He leads the team with 45 tackles and has notched a forced fumble.

Redshirt sophomore Dennis Briggs was having a breakout year through the first few games of the season. Briggs played in just three games before suffering a season-ending injury against Louisville.

In those three games, the sophomore had seven tackles and a half-sack, with a fumble recovery and a pass deflection. Most notable was his pass-rushing grade of 83.9 — the highest of any FSU defensive linemen. In just three games, Briggs was leading the team in quarterback hurries with 10 total.

Florida State is going to miss his presence, but with an offseason to heal, he could be poised to have an incredible season in 2022.