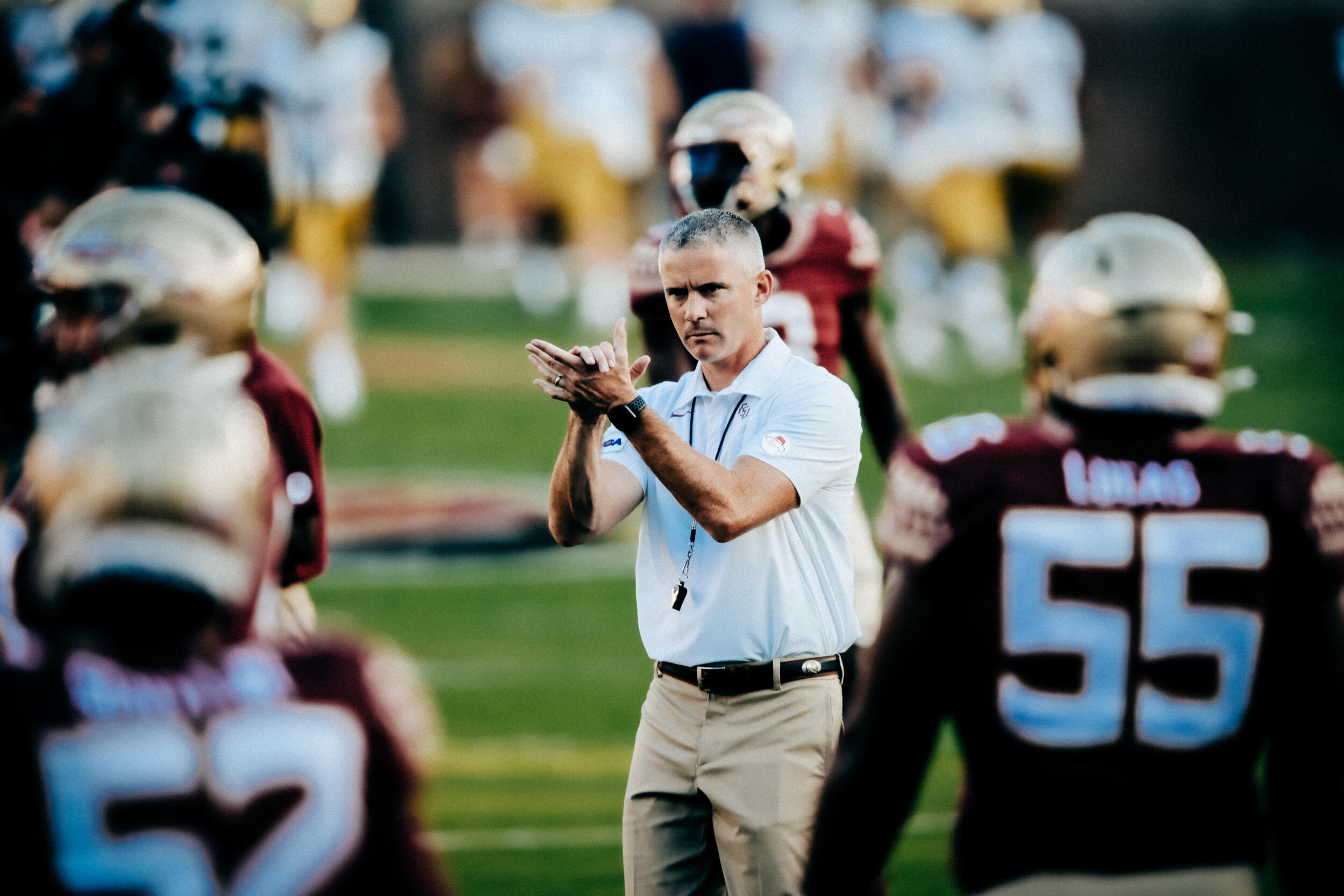 The climb has begun.

While Florida State did lose its season opener against ninth-ranked Notre Dame in a heartbreaking overtime thriller, the Seminoles showed they are not the same team as last year.

While there are still some personnel issues, especially on offense, FSU is trending in the right direction. The ‘Noles host Jacksonville State this week for a feel-good game before they enter ACC play.

When FSU’S On Offense

The ‘Noles looked a little rough around the edges on Sunday. The offensive line had issues blocking Notre Dame’s defensive front, and quarterback Jordan Travis had happy feet trying to avoid getting sacked.

Eventually the Seminole offense adjusted, and was able to put up 38 points on a very good defense. The ‘Noles were particularly effective on the ground, rushing for 264 yards and three touchdowns.

The group’s performance against the Fighting Irish resulted in a jump in ESPN’s SP+ rankings. The Seminole offense climbed from 41st to 32nd in the country.

Jacksonville State’s defense is not great. It had issues getting pressure last week against UAB and the defensive backs were picked on as a result. The Gamecocks allowed 370 yards through the air and 147 on the ground.

Florida State should have no issues scoring in this one.

When FSU’S On Defense

The Seminole defense impressed against the Irish. While the unit did allow 41 points in the opener, 21 of those points came off turnovers.

For the majority of the night, the Florida State defense was suffocating. Defensive line transfers Jermaine Johnson and Keir Thomas made their presence known immediately, tallying almost as many sacks in one night as the ‘Noles had from the defensive end position all last year.

The defense was fast, aggressive, and swarmed to the ball on every play. This group has shown incredible growth from last year.

Despite passing the eye test, FSU’s defense fell from its ESPN SP+ preseason ranking. The unit dropped from 69th to 74th.

The defensive group will have a chance to get the younger guys some playing time in the upcoming match-up. Jacksonville State’s offense is downright abysmal. The Gamecocks only tallied 154 yards in their opener against the Blazers, and have yet to score points on the season.

If the University of Alabama at Birmingham can stop Jacksonville State, the ‘Noles sure can.

John: FSU, 45-0. I think the Noles are tired of hearing about almost and come out sharp.

Cory: FSU, 34-20. I’m definitely jaded by the recent past. FSU, off a short week, against an FCS team, has been cause for concern. Anyone can get focused for a top-10 Notre Dame squad, but how will they focus against Jacksonville State? FSU struggles to focus in the first half, but a strong second half puts this game away.

Mike: FSU, 38-10. A short week against an inferior opponent after an emotional loss won’t bring about the best effort from Florida State, but as the game goes on, the Seminoles should pull away. This is a golden opportunity for FSU to have success, work out kinks and to feel good about itself before the start of ACC play.

Jake: FSU, 40-7. The Gamecocks had a difficult time scoring against the Blazers, and they are no Florida State. The defense will be suffocating in this one, but the third-stringers allow a touchdown late. Quarterback Chubba Purdy gets significant action and throws for a score or two.