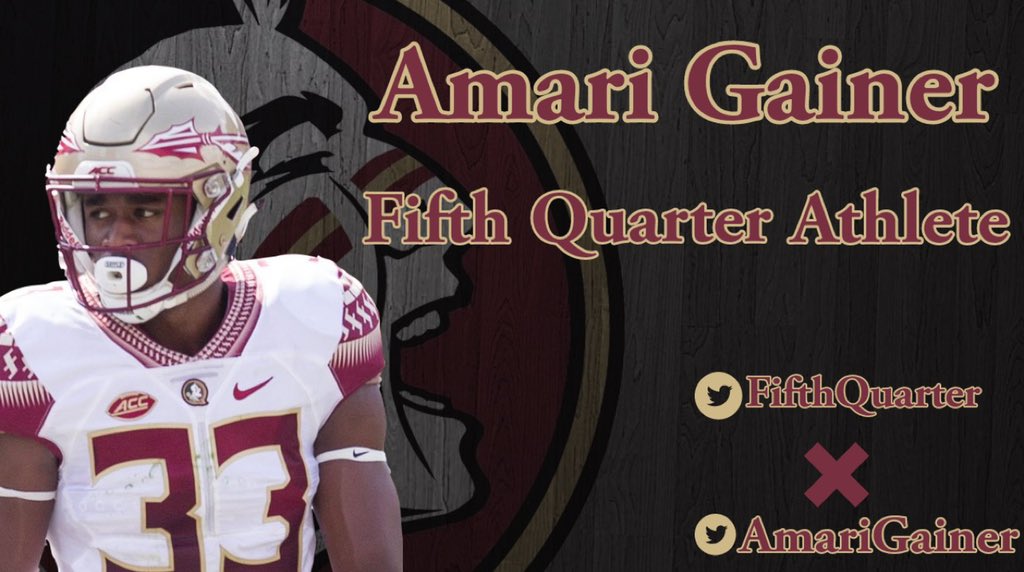 With Name, Image and Likeness (NIL) being one of the most important recent changes in college athletics, Fifth Quarter announced its first partnership on Tuesday night.

Florida State linebacker Amari Gainer has become the first Fifth Quarter athlete. A redshirt sophomore from Tallahassee, Gainer is regarded as one of the faces of the FSU defense.

Last season, Gainer led the Seminoles with 65 total tackles and a forced fumble. His five tackles for loss ranked second on the team to fellow linebacker Emmett Rice. Earlier this summer, Gainer was named to the Butkus, Lombardi and Bednarik Award watch lists.

“I’ve gotten a chance to get to know this young man,” James Coleman, a former FSU fullback and Fifth Quarter co-owner and staff writer, said in a tweet. “He’s a great athlete, he’s a phenomenal role model and I look forward to helping him, and many other athletes, tell THEIR story from THEIR perspective. Too many mediums interpret but you’ll get the source.”

I’ve gotten a chance to get to know this young man. He’s a great athlete, he’s a phenomenal role model and I look forward to helping him, and many other athletes, tell THEIR story from THEIR perspective. Too many mediums interpret but you’ll get the source. pic.twitter.com/gQDgwGjW9v

According to a press release from NIL House, which helped secure the collaboration with FQ, Gainer has already secured partnerships with G.O.A.T. Fuel, PSD Underwear and Barstool Sports. Created by NFL Hall of Fame wide receiver Jerry Rice, G.O.A.T. Fuel is “a lifestyle brand focused on bringing health-forward products and a G.O.A.T mindset to consumers”.

A community-minded talent, Gainer is also the founder of AG Gamechangers, which aims to impact youth by emphasizing the importance of education, perseverance and self-worth. To learn more about Gainer, visit his website.

Through the partnership, Fifth Quarter readers and subscribers will get to know more about Gainer firsthand. The partnership will include a show on the FQ Discord and media updates detailing Gainer’s daily routine. Those updates will go beyond football.

“We’re excited to have the opportunity to sponsor such a bright and talented young athlete,” said John Cooper, FQ president and Chief Operating Officer. “Our readers and subscribers will have the unique opportunity to follow one of the ACC’s best defensive players on his journey. We look forward to working with Amari and providing a platform for more college athletes to tell their stories.”

– John Cooper and James Coleman contributed to this article.