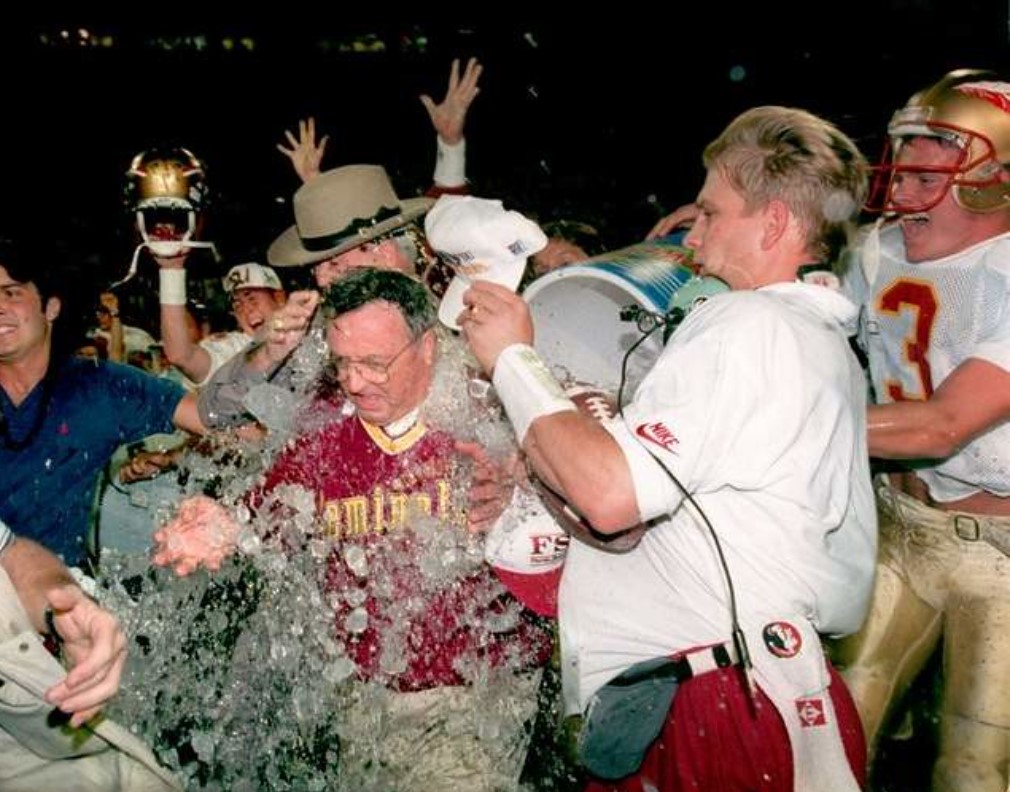 When you win more than 300 games at one school, two national championships and 12 conference titles, it’s not hard to find memorable moments. During legendary head coach Bobby Bowden’s tenure at Florida State however, there were some that stood above the rest.

The legendary Bowden died last weekend after a battle with pancreatic cancer at the age of 91. Over the last week at Fifth Quarter, we have been remembering his immense impact off the field from those who knew him.

Now, we remember his greatest gridiron moments. Here are the five most iconic images of the Bowden era at FSU:

(10) FSU 24, (3) Clemson 21
Sept. 17, 1988
A tie seemed like the best-case scenario for Florida State as its early-season trip to Clemson winded down. With less than two minutes to go and the contest tied 21-21, FSU was — apparently — forced to punt on 4th-and-4 from its own 21-yard-line. That punt however, never came. Instead the snap went to fullback Dayne Williams, the up-man. Williams handed the ball between his legs to LeRoy Butler, who remained motionless for a short period of time before taking off toward the sideline. Butler then raced 78 yards to the Clemson 1-yard-line. That would set up Richie Andrews’ winning field goal as the Seminoles pulled off a trick play for the ages and the victory.

(1) FSU 33, (3) Florida 21
Nov. 27, 1993
Needing to beat only its arch-rival to play for a national championship, Florida State had watched momentum swing dramatically in Gainesville. What had once been a 27-7 lead over Florida had become a 27-21 advantage. After a play for no gain and an incomplete pass from FSU quarterback and eventual Heisman Trophy winner Charlie Ward, Florida was one play away from getting the ball back as the Seminoles faced 3rd-and-10 from their own 21-yard-line with less than six minutes to play. On third down, Ward was flushed to his left where he dropped off a pass to freshman running back Warrick Dunn. Dunn had picked up the first down, but a key block gave him much more. The faithful in Gainesville could only watch as Dunn made his way down the sideline for a memorable 79-yard touchdown. The big play sealed the victory and handed legendary Florida head coach Steve Spurrier his first loss at home.

(1) FSU 18, (2) Nebraska 16
Jan. 1, 1994 (Orange Bowl)
In both the 1991 and 1992 seasons, Bowden watched his national championship dreams fall by the wayside as a result of a missed kick against Miami. To cap off the 1993 season however, the Seminoles returned to South Florida. This time, the kicking gods smiles in his favor. Against No. 2 Nebraska for the national championship, FSU had appeared to seal the 18-16 victory for a national championship when Scott Bentley knocked through a short field goal with 21 seconds left. Bowden was doused in Gatorade after a long completion from Nebraska’s Tommie Frazier to Trumane Bell on what appeared to be the final play of the game. Instead, officials ruled that a second remained and the Cornhuskers were given one final snap from the FSU 28-yard-line. With a chance to steal a national title, Nebraska kicker Byron Bennett lined up for a 45-yard field goal try. From the moment the ball hit his foot however, it was wide left. Bowden could finally celebrate, because for the first time in his career, he was a national champion.

(2) Virginia Tech 29, (1) FSU 46
Jan. 4, 2000 (Sugar Bowl)
What was once a 28-7 lead had evaporated in the Sugar Bowl for the 1999 national championship. Virginia Tech had rallied to score 22 straight points and take a 29-28 lead into the final quarter, but the Seminoles refused to lose. After a touchdown strike from Chris Weinke to Ron Dugans, a 2-point conversion and a Sebastian Janikowski field goal put FSU back in front 39-29, wide receiver Peter Warrick’s third touchdown of the night put the contest away. After a failed fake punt from Virginia Tech with less than eight minutes to go, Weinke fired one deep for Warrick. With Virginia Tech’s Ike Charlton draped all over him, Warrick made an improbable juggling catch in the end zone. A flag flew for pass interference, but it did not matter. Warrick’s juggling catch had clinched the win and capped Bowden’s first and only perfect season as the Seminoles became the AP’s first wire-to-wire No. 1.

(9) FSU 38, (11) Florida 34
Nov. 29, 2003
Bowden’s final win against Florida was an absolute thriller. In a contest that saw the lead change four times in the final quarter, FSU trailed 34-31 and was one play from meeting its fate. Facing 4th-and-14 from its own 24-yard-line, quarterback Chris Rix kept the Seminoles alive with a 24-yard strike to Dominic Robinson. One play later, he handed the rival Gators a dagger. Flushed to his right, Rix had time and space to wind up as he fired for the end zone. With Florida safety Guss Scott’s back turned, wide receiver P.K. Sam adjusted to the throw in the end zone with 55 seconds and hauled it in for the winning touchdown. The Seminoles won 38-34 in a contest that remains the highest-scoring meeting between the schools in Gainesville.