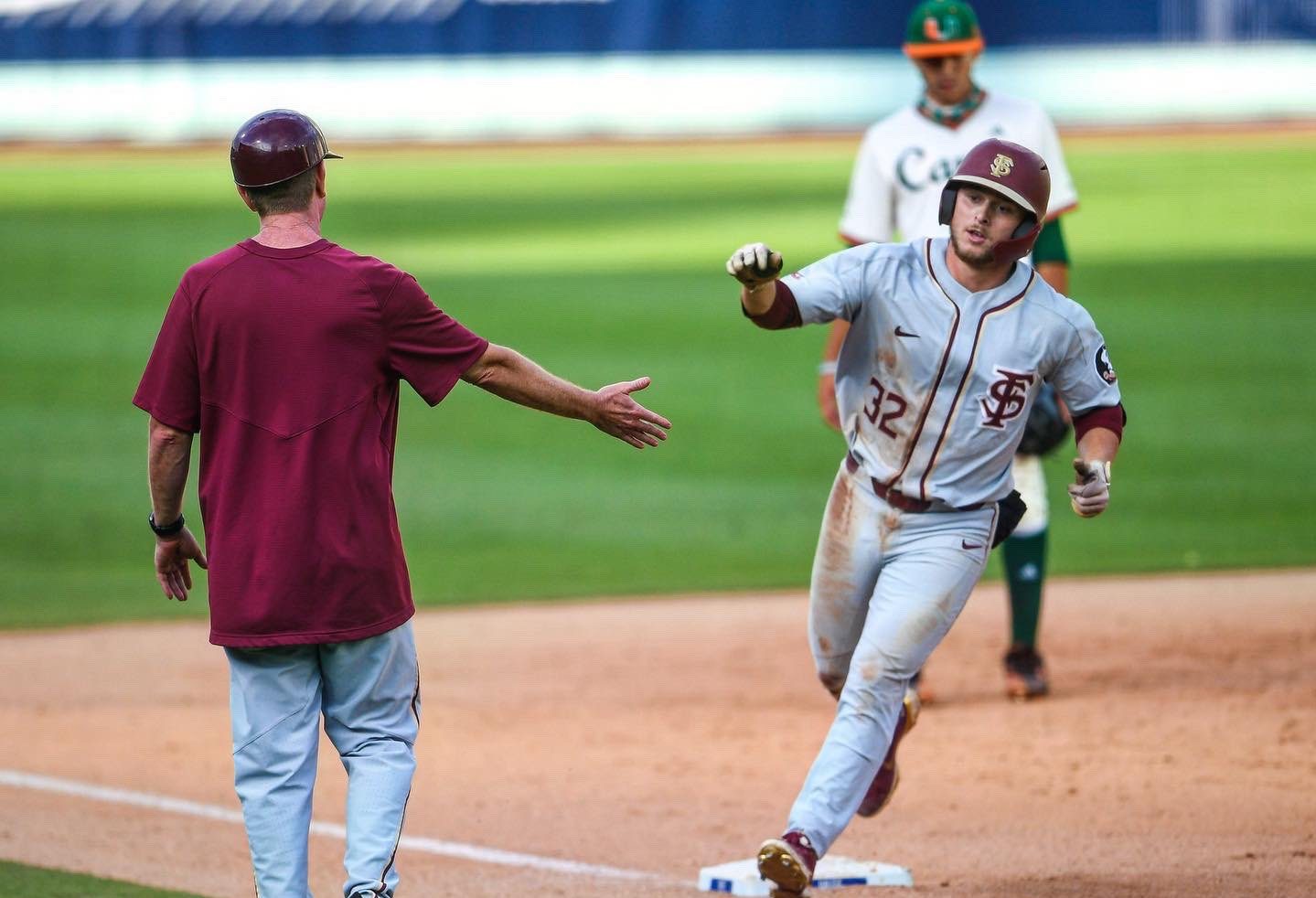 The regular season is over. The ACC Tournament is over.

And Florida State baseball now knows where it will begin its NCAA Tournament journey.

In what will likely be its final match-ups with ACC teams this season, FSU split a pair of contests in Charlotte. Here’s a look back on the week that was for the Seminoles:

(9) Duke 12, (5) Florida State 1
Wednesday, May 26 (ACC Tournament)
Duke pushed across five runs before Florida State could even record an out in the ACC Tournament opener for both teams. Michael Rothenberg’s grand slam highlighted a 5-run frame for the Blue Devils. Erikson Nichols and Ethan Murray also went yards in the convincing Duke victory. Nichols finished 3-for-5 with three RBIs and two runs scored. Robby Martin’s solo home run accounted for all of the FSU offense. Martin had two of the Seminoles’ four hits.

(5) Florida State 6, (4) Miami 3
Friday, May 28 (ACC Tournament)
Dylan Simmons’ 2-run double set the tone during a 3-run first for FSU as the Seminoles went 4-0 against Miami on the season. Starting pitcher Parker Messick allowed just two runs on five hits in five innings. FSU’s Logan Lacey and Miami’s Raymond Gil each homered in the contest. The Seminoles took a 4-run lead to the bottom of the ninth, but Miami brought the winning run to the plate. Jonah Scolaro struck out Anthony Vilar to end the game. Gil and Christian Del Castillo each had two of the eight hits for Miami. Tyler Martin was 2-for-5 with an RBI for the Seminoles.

In the final Baseball America Poll before the end of the season, FSU fell one spot to No. 18.

The Seminoles will head to the NCAA Tournament with an overall record of 30-22. FSU will be a No. 3 seed in the Oxford Regional.

FSU has qualified for a 43rd straight NCAA Tournament.

Splitting a pair of games marked the second straight ACC Tournament where the Seminoles finished 1-1. FSU has won at least one game in each of the last seven ACC Tournaments.

FSU heads to the NCAA Tournament as the ACC’s leader in ERA at 3.51.

With Friday’s win, FSU improved to 4-0 against Miami this season. The Seminoles had not swept the season series vs. the Hurricanes since 2012.

FSU will be joined in the Oxford Regional by top seed and No. 12 national seed Ole Miss, Southern Mississippi and Southeast Missouri.

As the No. 3 seed, FSU will face No. 2 seed Southern Mississippi on Friday at 3 p.m. ET on ESPNU. Ole Miss will take on Southeast Missouri later in the day.

The regional will be double-elimination format. Friday’s winners will meet on Saturday as will the losers.