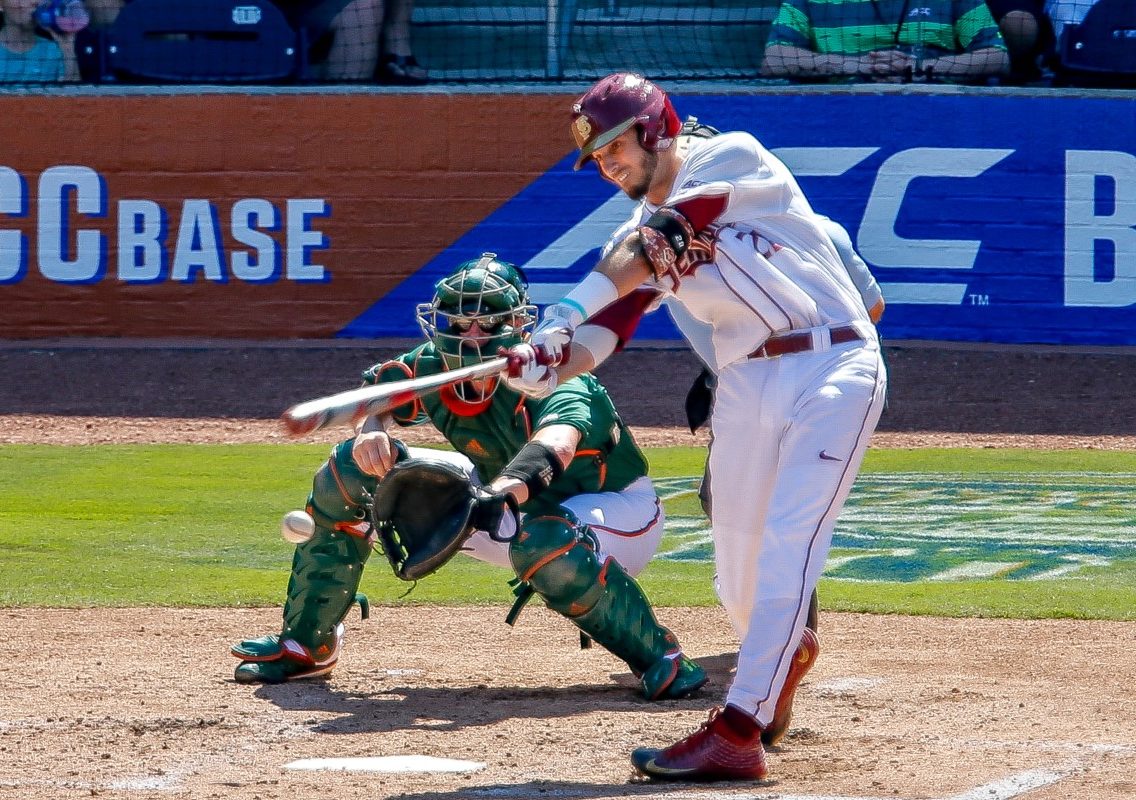 Throughout the course of his time in Tallahassee, Dylan Busby had plenty of big hits for Florida State.

One of those came on this day five years ago. In a de facto ACC Tournament semifinal, Busby’s walk-off single in the bottom of the ninth lifted FSU to a 5-4 victory and a spot in the ACC Championship.

Both in Pool A at the ACC Tournament, FSU and Miami had each won their first two games in Durham. The two teams each collected wins over NC State and Georgia Tech prior to meeting on May 28, 2016.

Miami was the No. 1 seed in the ACC while the Seminoles were fourth. The Hurricanes took two of three from FSU during the regular season, but the Seminoles had closed the series with a walk-off win off the bat of Jackson Lueck one week prior.

Momentum was on Miami’s side as FSU came to bat in the bottom of the ninth. The Hurricanes had scored two runs in the top of the ninth to draw even at 4-4.

Devin Meyer came in to pitch for Miami, but he was greeted rudely with a hard-hit single from Lueck. After Cal Raleigh and Nick Graganella drew walks, FSU needed just a fly ball or a walk to end the contest.

Meyer however, was able to briefly settle in. FSU outfeidler Ben DeLuzio hit into a fielder’s choice as Lueck was retired at the plate. That set the stage for Busby.

With the count 1-0, Busby got a fastball from Meyer. He was able to hit it hard and past Miami shortstop Brandon Lopez, into left field for the game-winning hit.

FSU had earned a trip to the next day’s ACC Championship. The final: FSU 5, Miami 4.

Miami jumped to an early 2-0 lead. Willie Abreu got the Hurricanes on the board with an RBI double in the second inning before Randy Batista added an RBI triple in the fourth.

With a 4-2 lead, FSU turned to Tyler Warmoth to try to close the game in the ninth. After beginning the inning with a strikeout, Warmoth hit Abreu before issuing consecutive walks. Chase Haney was unable to pick Warmoth up as he allowed the tying 2-run single to Edgar Michelangeli.

Haney and Alec Byrd were each able to record one out to get the game to the bottom of the ninth tied.

After winning the ACC in 2015, the Seminoles were unable to repeat. FSU fell to Clemson in the ACC Championship the next day, 18-13.

Although FSU didn’t win the ACC, it did earn the right to host the Tallahassee Regional. The Seminoles swept the regional before falling to rival Florida in three games during the Gainesville Super Regional.

While FSU fell short of the ACC crown and the College World Series, the Seminoles made their second of four straight ACC Championship appearances. It wouldn’t have been possible without Busby’s heroics that took place on this day five years ago.