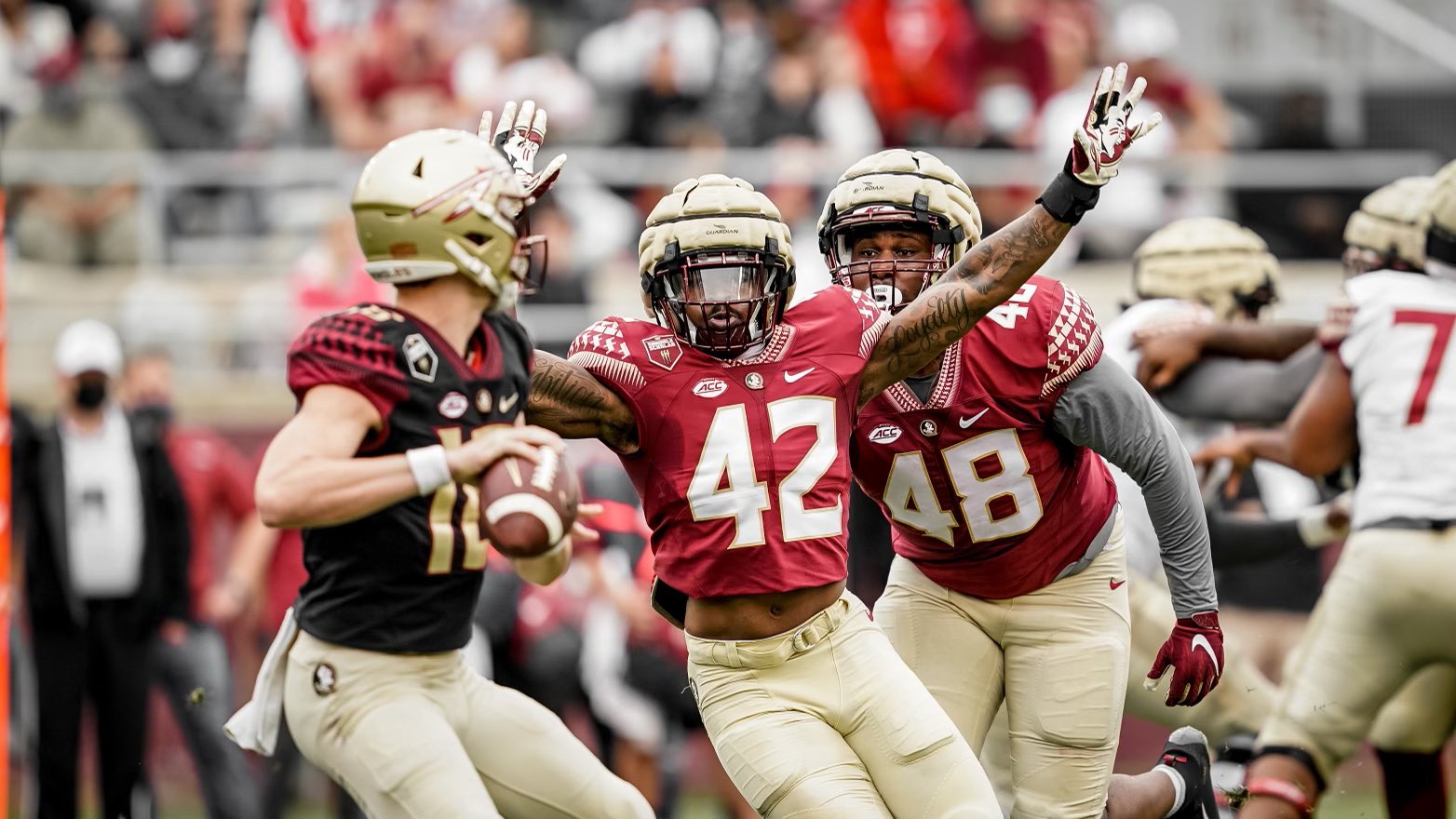 I know many believe I’m partial to offense, because I played fullback.

I talk about scoring touchdowns. But please remember the No. 1 reason why I played football: to legally be able to put hands on people with no negative consequences.

So, as promised, after giving you and in-depth view of the Florida State spring game from the offense perspective, here goes a shot at breaking down defense.

Not to be repetitive, but read the first two paragraphs from the offensive section an apply it here. “The Standard” is undeniably the standard; excellence above everything.

One thing we have to maintain is to not get too excited about things, especially things that do no matter. If defensive end Jermaine Johnson dominates Notre Dame’s offensive line the way he did FSU’s on Saturday, we can look back and celebrate what a great transfer he is. However, we cannot anoint any player with greatness until they’re performing when it matters.

NFL scouts will not take into account how a guy handles teammates but doesn’t translate to Saturdays. With that said, let’s not be civilized; let’s be fanatic.

Jermaine Johnson is a stud and a 12-sack, 4-forced fumble first-team All American guy. No, seriously, Johnson has the talent and ability to potentially be that type of player. He was a highly-recruited player and coached up properly at Georgia.

Mix that ability and prior foundation with getting to work with Odell Haggins and there is a possibility for big-time results. We can’t judge him solely on this performance, however. As stated, we know the offensive line is still a work in progress and was missing quite a few key guys to injury on Saturday.

Without seeing everyone, we definitely got a chance to see the depth and bodies we have across the defensive line. Outside of Johnson, another transfer, Deonte Williams, got into the backfield quite a bit off the edge. Johnson helped cause a turnover with his pressure by making the quarterback move off his spot, offsetting the timing of his throw.

We also saw defensive end Derrick McLendon record a sack on McKenzie Milton. McLendon was able to get off the edge and up field quite a bit. Another defensive end who made some explosive plays was Josh Farmer. The kid that has the size and speed to contribute early on for this team; he stuck out a lot on film.

One thing I liked and find intriguing is deciding to play three defensive ends and only one tackle in the front seven. With a lot of talk about showing more of a 4-2-5 defense, I don’t think casual fans understand the difference — not just in responsibility — but with body mass and ability.

Being able to slide guys like Keir Thomas, McLendon, Farmer and Dennis Briggs, who is 6-foot-3 and 270 pounds, inside adds speed and flexibility off the ball. That type of flexibility and athleticism at the 3-techique will keep guys like Fabian Lovett, Robert Cooper, Malcolm Ray and others fresh as the 1-techique.

There’s just a competitive advantage to getting the best guys and athletes onto the field as much as possible and keeping those front four fresh. The front might be the deepest position group we have on the defense.

A lot has been said about missing the potential voice of our defense with linebacker Emmett Rice out with an injury. This position however, has long been waiting for someone to step up and get us back to the glory of producing NFL-caliber linebackers.

We all have been enamored with the ability of Amari Gainer and we know what we are going to get from him; he’s perhaps our least-questioned linebacker, but we wanted to see what the rest of the position group will offer.

While we got to see Stephen Dix, Kalen Deloach and D.J. Lundy on the field, many probably left the spring hoping that there is still mass improvement from the group. Film will show still some angling that could improve when reading keys or chasing ball carriers. Linebackers were exploited in coverage quite a bit while trying to match up with FSU’s backs, receivers and tight ends.

Large Voids But Big Potential in the Secondary

A colossal void in our secondary has opened. We lose both Asante Samuel Jr. and Hamsah Nasirildeen to graduation and the NFL Draft. FSU walks into the season with a lot of guys with some playing time in the secondary, but nobody that has proven great success. There is however, a lot of potential, which is key.

One reason for positivity, especially when it comes to the young guys early on, is Kevin Knowles. Knowles is a player who could be attending senior prom, but instead flashed in Saturday’s spring game.

Knowles recorded an interception early on in the scrimmage. He also shot under a tunnel screen and made a good tackle. Knowles made the play purely off recognition and reaction.

On each of those plays, Knowles showed a high football IQ. To get the interception, he did a fantastic job undercutting the receiver before beating blockers on a screen to make a play. Those are the types of efforts we will need a lot more of from this defense in order to have success.

Even though much won’t show up in the stat sheet, film guys who grade players will notice the efforts of other youngsters, Jadarius Green-McKnight and Sidney Williams. Both did a good job, especially in zone coverage.

However, we can’t discount the ball placement. The quarterback Milton sniped both of those throws. That was a theme on Saturday. We also saw Milton throw a dart between Brendan Gant and Travis Jay for a big completion to Josh Burrell — another early enrollee.

Dent did have a his moments, however. We saw him sniff out a screen later in the game to the running back to make a good play. It’s safe to say he got half his face back from getting beat earlier.

As stated the other day “it’s never as good as it appears nor bad as it seems.” It was a spring game or more accurately described, it was a scrimmage.

Granted, it was a glorified scrimmage for the team, for the fans, for whoever. Still, you couldn’t expect for the coaches to come out and unveil all their tricks and secrets. Yes, the play-calling was simplistic on offense and defense, but that’s exactly the way it should be.

Yes, the gripes about the team and questioning the strength and conditioning are permissible, because we have guys who should be bought in by now and getting results, but this team is still two years away from meeting the expectations of “The Standard”.

The fastest way to knock off that time is for this defense to make drastic improvements. It will be young, but does have some experience.

Transfers Johnson, Robinson and Thomas will be vitally important pieces for that to come to fruition. Those three gentlemen should serve as anchors on the defensive side of the ball. If the rest of the defense can grow up fast, FSU has the ability to turn things around as a program.

Gainer and Travis Jay will be leaned upon from the opening snap, but this team does have some depth. However you want to quantify the quality of that depth, we at least have it and up front, we appear to have solid guys, which will support the back seven immensely.