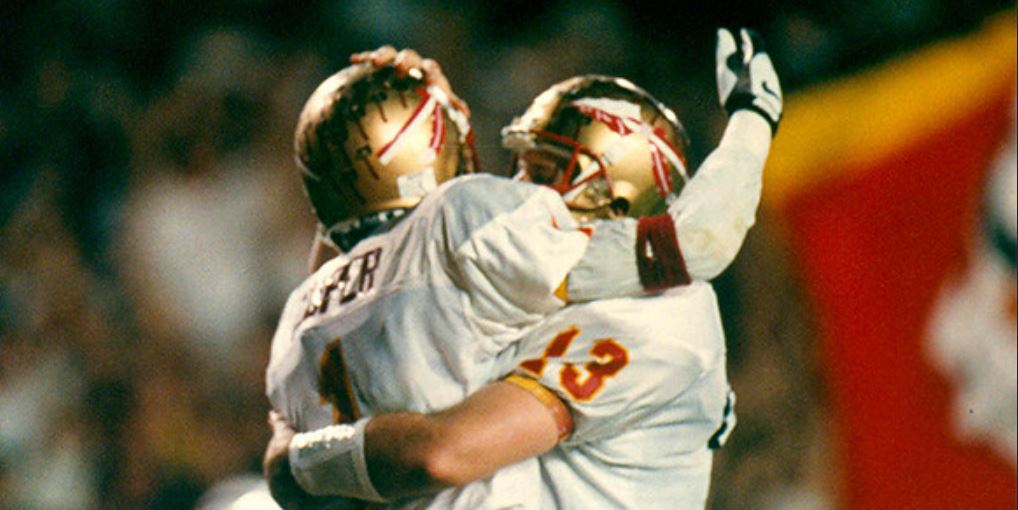 Think about Florida State and Notre Dame in the 1990’s and the game that comes to mind is the 1993 contest in South Bend dubbed, “The Game of the Century”. But in three straight seasons, the Seminoles and Fighting Irish played thrillers.

The lone bowl match-up over that stretch came on this day 25 years ago. In a top-10 match-up at the Orange Bowl, FSU erased a 12-point fourth-quarter deficit to top Notre Dame, 31-26.

Florida State had won 10 straight bowl games as it arrived in Miami on Jan. 1, 1996. The Seminoles were 9-2 and ranked No. 8. FSU was preseason No. 1, but dropped two if its final four regular season games.

Also 9-2, Notre Dame arrived with a No. 6 national ranking. Following a 3-2 start, the Fighting Irish had won six in a row. Early in the fourth quarter, they appeared on their way to making it seven.

What was once a 4-point Florida State lead had become a 12-point deficit. Notre Dame had scored 16 straight points and started the fourth quarter with a safety, followed by a 5-yard touchdown pass from Thomas Krug to Pete Chryplewicz.

With less than 12 minutes remaining, FSU trailed 26-14, but quarterback Danny Kanell and the Seminoles refused to go quietly. It took just five plays and less than two minutes to answer.

Following a pair of rushes by Warrick Dunn, Kanell capped the drive with three straight completions, including an 11-yard touchdown pass to E.G. Green. With the score now 26-21, the FSU defense responded with a 3-and-out. Dee Feaster returned the Notre Dame punt 30 yards to the Fighting Irish’s 30-yard-line.

FSU needed to go only 30 yards for the lead, but after a Kanell misfire on third down, head coach Bobby Bowden had a decision to make with about seven minutes to play. He kept his offense on the field.

Facing 4th-and-5, Kanell delivered a perfect pass to a well-covered Green. Green carried Notre Dame defenders to the 3-yard-line. Two plays later, Kanell and Andre Cooper hooked up for their third touchdown connection of the night as FSU moved in front. The two connected again for the 2-point conversion.

Now up 29-26, the FSU defense did the rest. The Seminoles forced a Marc Edwards fumble on the ensuing drive. The FSU offense turned the ball over on downs inside the 5-yard-line with just over two minutes to play. That allowed the defense to put the exclamation point on the victory.

On the first play of the Notre Dame drive, Krug felt immense pressure from FSU’s Reinard Wilson in the end zone. He was forced to get rid of the ball, but had nowhere to go with it. Intentional grounding was called and the Seminoles were awarded a safety. They proceeded to run out the clock.

Midway through the first quarter, Krug and Kanell traded touchdown passes. Krug’s 39-yard touchdown toss to Derrick Mayes got the scoring started, but FSU answered less than two and a half minutes later as Kanell found Cooper for a 15-yard touchdown.

Scott Cengia’s short field late in the first quarter gave Notre Dame a 10-7 lead after one. Kanell and Cooper hooked up for a 10-yard touchdown late in the second quarter as FSU took a 14-10 lead to the locker room.

The lone points of the third quarter came on a 33-yard touchdown pass from Krug to Mayes. Leading 17-14 after three, Notre Dame extended its lead to five after Kanell stepped out of the end zone early in the fourth quarter. The Fighting Irish proceeded to go 63 yards in five plays for the Chryplewicz score.

FSU finished with 478 yards in the victory. Kanell passed for 290 yards and four touchdowns. Dunn rushed for 155 yards for FSU in the victory while Wayne Messam led the Seminoles with six catches for 103 yards receiving.

Notre Dame rushed for 256 yards in the loss, led by Robert Farmer’s 93. Mayes caught six passes for 96 yards and the two scores in the loss.

The Orange Bowl loss would be the final bowl game for Notre Dame under legendary coach Lou Holtz. The Fighting Irish went 8-3 and finished ranked the following year, but turned down a trip to the Independence Bowl.

For FSU, the win was an NCAA-record 11th straight bowl win for the Seminoles. Florida State would go on to finish No. 4 in the final AP Poll for its ninth straight top-5 finish.

Over the years, FSU has appeared in the Orange Bowl more often than in any other bowl game. The legendary Bowden would take the Seminoles to three more Orange Bowl appearances, but his final win came against Notre Dame on this day a quarter-century ago.