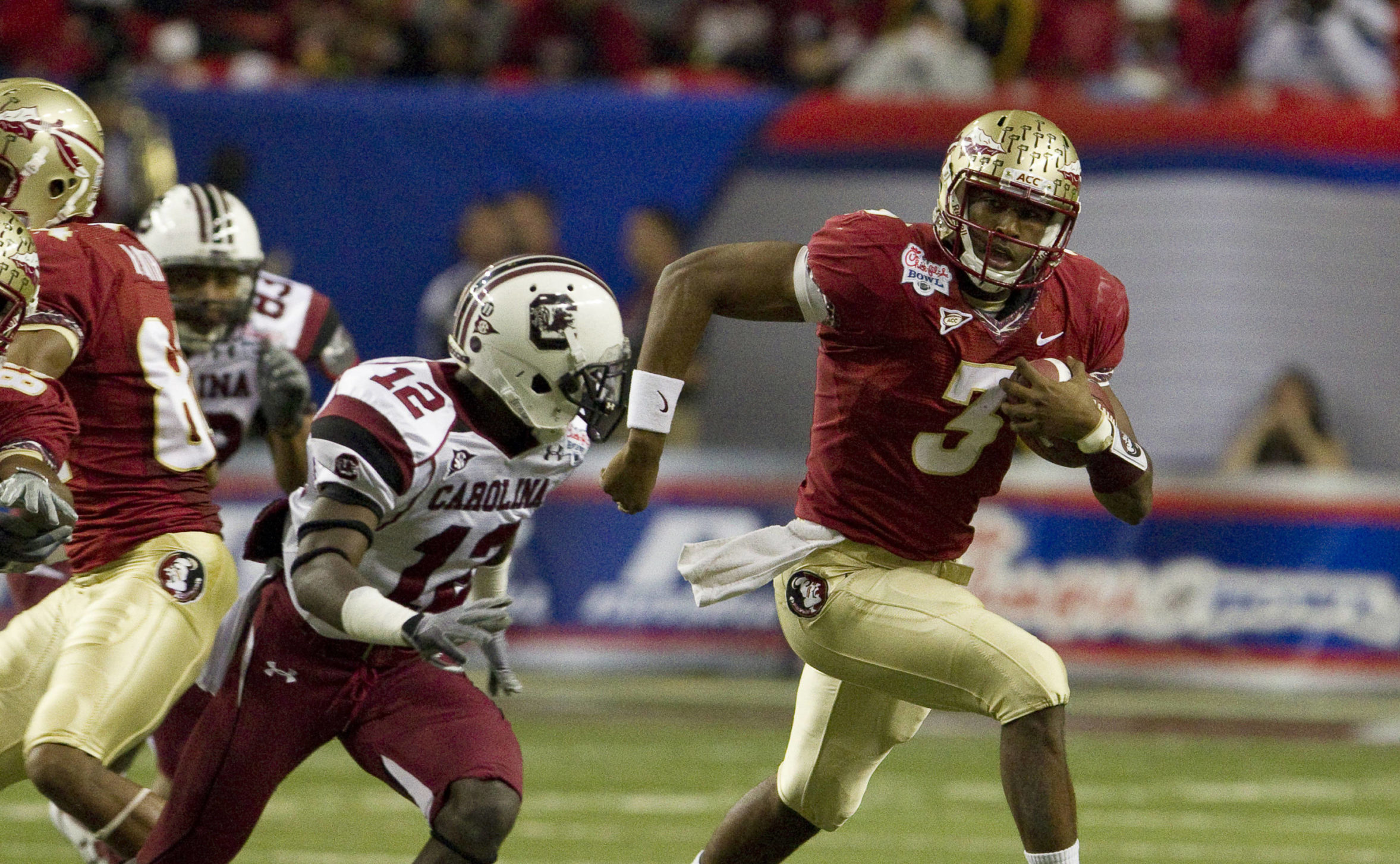 Under Jimbo Fisher, 10-win seasons were commonplace for Florida State. Entering his first season as head coach however, they had been coming with less regularity.

On this day 10 years ago, Florida State notched its first 10-win season since 2003. The Seminoles did so by beating South Carolina in the Chick-fil-A Bowl, 26-17.

The Chick-fil-A Bowl at the Georgia Dome on Dec. 31, 2010 featured a pair of conference runners-up who entered with 9-4 records. The Gamecocks, ranked No. 19, had won the SEC East for the first time ever, but were manhandled by eventual national champion Auburn, 56-17.

FSU fell to Virginia Tech in the ACC Championship, 44-33, but still had a lot to play for. Ranked No. 23, FSU was looking for its first 10-win season in seven years.

South Carolina entered as a 3-point favorite, but it didn’t take long to realize that things weren’t going to come easy against the Seminoles. The Gamecocks reached the red zone on the game’s opening drive, but came up empty after FSU cornerback Greg Reid delivered a punishing blow to standout running back Marcus Lattimore after a short pass.

Lattimore put the ball on the ground and linebacker Kendall Smith scooped it up and raced 46 yards the other way. That would lead to a Dustin Hopkins field goal. The next two South Carolina possessions would also result in turnovers.

Quarterback Stephen Garcia was intercepted by Mike Harris and Smith on his next two possessions. Unfortunately for FSU, all it could muster was a field goal to take a 6-0 lead.

Up 6-0 in the second quarter, FSU was knocking on the door when it faced 4th-and-1 from the South Carolina 2-yard-line. Quarterback Christian Ponder appeared to have a wide open receiver in the end zone, but was unable to make the throw. It became clear that Ponder was not himself.

After being diagnosed with a concussion, Ponder was replaced by backup E.J. Manuel. Manuel had gone 3-1 the year prior as a starter and was 1-1 in 2010. He proved up to the task.

Following an interception of Garcia by FSU’s Xavier Rhodes and a turnover on downs, Manuel led the game’s first touchdown drive late in the first half. After a 32-yard run by Manuel, Chris Thompson capped the drive with a 27-yard touchdown run.

Back Come the Gamecocks

A Stephon Gilmore interception of Manuel would thwart an FSU scoring opportunity. The Gamecocks proceeded to march 92 yards as wide receiver Ace Sanders found Garcia on a trick play for a 3-yard touchdown.

After Hopkins’ fourth field goal of the night gave FSU a 19-10 lead, the Gamecocks drew to within two on Brian Maddox’s 7-yard touchdown. With just under 12 minutes to play, South Carolina was alive and well.

With FSU’s 13-point lead down to two, the Seminoles were desperate for offense. Manuel would not disappoint.

Florida State started at its own 37-yard-line and methodically worked its way down the field. On third down, Manuel was a surgeon.

On the first series of downs, Manuel’s 11-yard completion to Thompson kept the FSU drive alive on 3rd-and-5. After Thompson ran for a first down on 3rd-and-1, Manuel found Bert Reed for eight yards on 3rd-and-7 to move the Seminoles inside the South Carolina 10. The next two plays netted just two yards as the Seminoles faced 3rd-and-goal from the 7.

After soaking more than six minutes off the clock, Manuel found Taiwan Easterling in the middle of the end zone for the touchdown to go ahead, 26-17. Reid’s pass break-up on fourth down on the ensuing South Carolina drive allowed FSU to put the game away.

Manuel passed for just 84 yards in the win, but added 46 on the ground. As a team, the Seminoles rushed for 218 yards.

Although he didn’t leave on the best of terms, Fisher’s tenure as FSU head coach was a prosperous one. In eight seasons, Fisher led the Seminoles to seven top-25 finishes, four bowl wins, three ACC championships, a playoff appearance and the program’s third national championship in 2013.

Over those eight seasons, FSU also had six 10-win campaigns. The first of those was sealed on this day a decade ago.