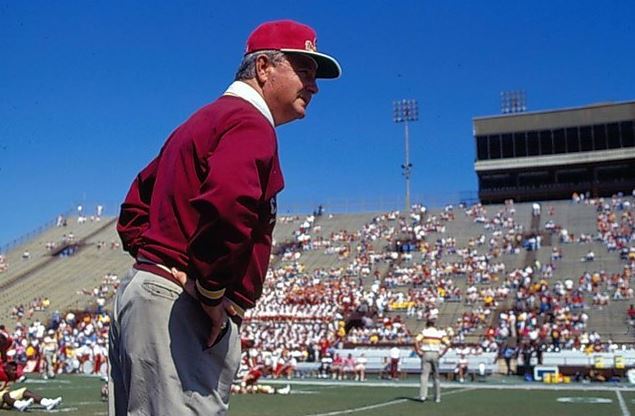 One of those came on this day 30 years ago, but that’s not necessarily what’s remembered. Bowden picked up his 200th career coaching win as FSU defeated LSU, 42-3. The contest however, ended with benches cleared and both teams in the middle of a brawl.

After back-to-back losses to Miami and Auburn, Florida State was desperate for a win as it returned home to face LSU on Oct. 27, 1990. The Seminoles were 4-2 and had fallen to No. 12 in the polls.

LSU was also 4-2 with losses to Vanderbilt and Florida. The Tigers were heavy underdogs and were dominated throughout the day.

It didn’t take long to recognize that it was going to be FSU’s day. Amp Lee rushed for three touchdowns in the first half to give the Seminoles a 21-3 lead, but they weren’t done.

It looked like that would be the score at the break until FSU’s Reggie Freeman sacked LSU quarterback Chad Loup late in the first half. Loup fumbled on the play and the Seminoles recovered at the Tigers’ 38-yard-line with three seconds left in the half.

Rather than send out Richie Andrews for a long field goal, Bowden had quarterback Casey Weldon throw one toward the end zone. His prayer was caught by wide receiver Shannon Baker for a touchdown as time expired in the first half.

After a scoreless third quarter, FSU found the end zone twice in the final quarter. Paul Moore’s 6-yard touchdown run extended the lead to 35-3 before Felix Harris scored from 31 yards out with less than four minutes to play to cap the scoring.

FSU finished with 468 yards of offense to just 207 for the Tigers. The Seminoles forced five turnovers in the win. Kirk Carruthers led FSU with 13 tackles and 1.5 sacks. John Davis and Leon Fowler each came away with interceptions.

The FSU sideline had prepared a celebration for the legendary Bowden as time ticked away. On the game’s final play, Carruthers laid a hit on LSU backup quarterback Jesse Daigle near the sideline and the fight was on.

Benches cleared and fists flew as the clock hit triple zeroes. A look of disappointment had come across Bowden’s face as his milestone win had been overshadowed by an all-out brawl.

With the victory, Bowden became just the 22nd collegiate coach to reach 200 wins. Throughout his legendary career, Bowden would win 377 games although 12 would be later vacated. Only Penn State’s Joe Paterno won more.

As for the 1990 season, the win began a 6-game winning streak to close the year for FSU. The Seminoles capped the year with a 24-17 win over Paterno’s Nittany Lions in the Blockbuster Bowl to finish No. 4 in the polls.

As for LSU, the loss would begin a 4-game losing streak. The Tigers would finish just 5-6 in what would be a second straight losing season.

In his career as FSU head coach, Bowden would go 7-1 against LSU. The most memorable of those victories served as his 200th, but will forever be remembered for the brawl that followed. It happened on this day three decades ago.