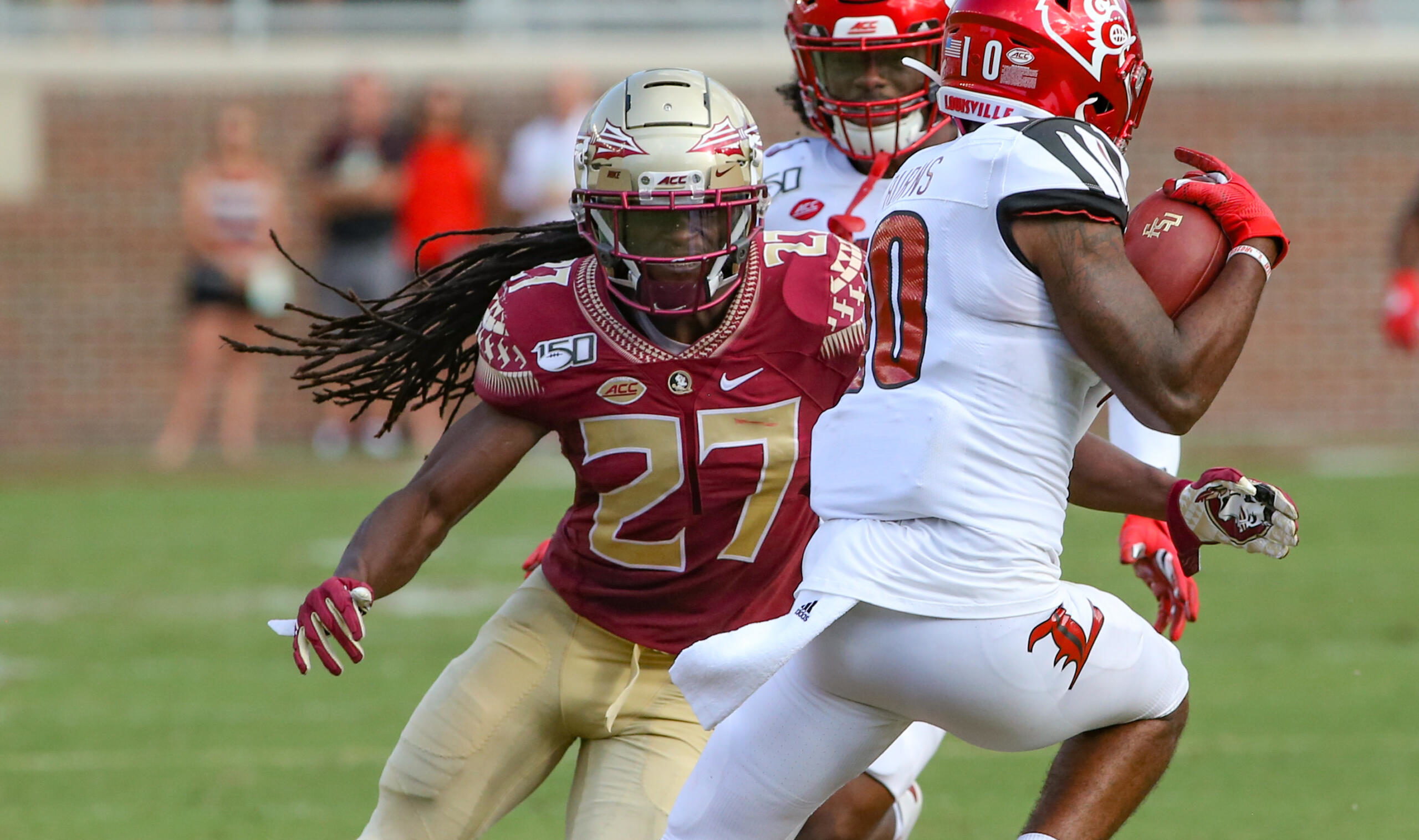 After upsetting No. 5 North Carolina 31-28 last week, Norvell and company will try to pick it up on Saturday as the Seminoles travel to face Louisville. Both teams come in with losing records. FSU is 2-3 while the Cardinals are just 1-4 overall and winless in ACC play.

FSU has played much better in recent weeks and the biggest reason for that has been the insertion of Jordan Travis into the lineup as the full-time quarterback. Travis, a Louisville transfer, is regarded more for his running ability, but has made big plays through the air. For the season, Travis has seven total touchdowns.

Travis leads the Seminoles in passing and rushing. He has plenty of help in the backfield however, with the trio of La’Damian Webb, Lawrance Toafili and Jashuan Corbin. With star Tamorrion Terry out, FSU will rely on guys like Ontaria Wilson, Keyshawn Helton and tight end Camren McDonald in the passing game.

Last week, the Louisville defense held Notre Dame to just 12 points in a 12-7 loss to Notre Dame, but the Cardinals have allowed at least 45 points in two of their four ACC games. The strength for Louisville is the linebackers. Dorian Etheridge and Monty Montgomery have combined for seven of the team’s 11 sacks. C.J. Avery and Rodjay Burns are also very good at the position.

It hasn’t clicked yet this season, but there is a ton of talent at the offensive skill positions for Louisville. Malik Cunningham has regressed slightly since last season, but is a dual threat behind center. With 519 yards, Javian Hawkins is the second-leading rusher in the ACC. Out wide, Tutu Atwell, Braden Smith and Dez Fitzpatrick make for one of the best receiving trios in the ACC.

Despite allowing 558 yards to North Carolina last week, FSU may have played its best game of the season defensively. Defensive linemen Marvin Wilson, Janarius Robinson and Joshua Kaindoh all came to life for the Seminoles. Linebacker Amari Gainer is the top tackler for FSU while junior cornerback Asante Samuel Jr. has likely been the defensive MVP thus far. Samuel leads the nation with three interceptions and the Seminoles with two fumble recoveries.

FSU will be aiming for its third straight win over Louisville when the teams meet Saturday. The Seminoles overcame 24-21 deficits in each of the last two meetings. Late touchdowns by Terry and Cam Akers propelled FSU to a 35-24 victory last season in Tallahassee. Saturday’s contest begins at 12 p.m. ET and airs on Raycom Sports Network.

Tulsa (1-1) at South Florida (1-4)
Friday, Oct. 23 at 7:30 p.m. ET (ESPN2)
It’s been three weeks since Tulsa upset UCF. The Golden Hurricane will be looking for a second straight win in the state of Florida on Friday night. South Florida is 3-0 all-time against Tulsa.
Prediction: Tulsa 34, South Florida 17

Tulane (2-3) at UCF (2-2)
Saturday, Oct. 24 at 2 p.m. ET (ESPN2)
UCF and Tulane are both coming off heartbreaking losses. The Knights lead the nation in total offense, but will be looking to avoid their worst 5-game start since a winless 2015 campaign. Tulane has never beat UCF in Orlando.
Prediction: UCF 49, Tulane 31

Florida Atlantic (1-0) at No. 22 Marshall (4-0)
Saturday, Oct. 24 at 2:30 p.m. ET (CBS Sports Network)
The state of Florida’s last undefeated team, Florida Atlantic, will finally get to play a football game on Saturday in Huntington. Marshall is undefeated, ranked and in the top five nationally in both scoring and total defense. The Thundering Herd handed FAU its only Conference USA loss last season.
Prediction: Marshall 28, Florida Atlantic 17

Virginia (1-3) at No. 11 Miami (4-1)
Saturday, Oct. 24 at 8 p.m. ET (ACC Network)
Miami bounced back from its first loss with a solid performance against Pittsburgh. Virginia aims for its second win over Miami in three years. In each of the last two meetings, the unkranked team has upset the ranked team.
Prediction: Miami 38, Virginia 16