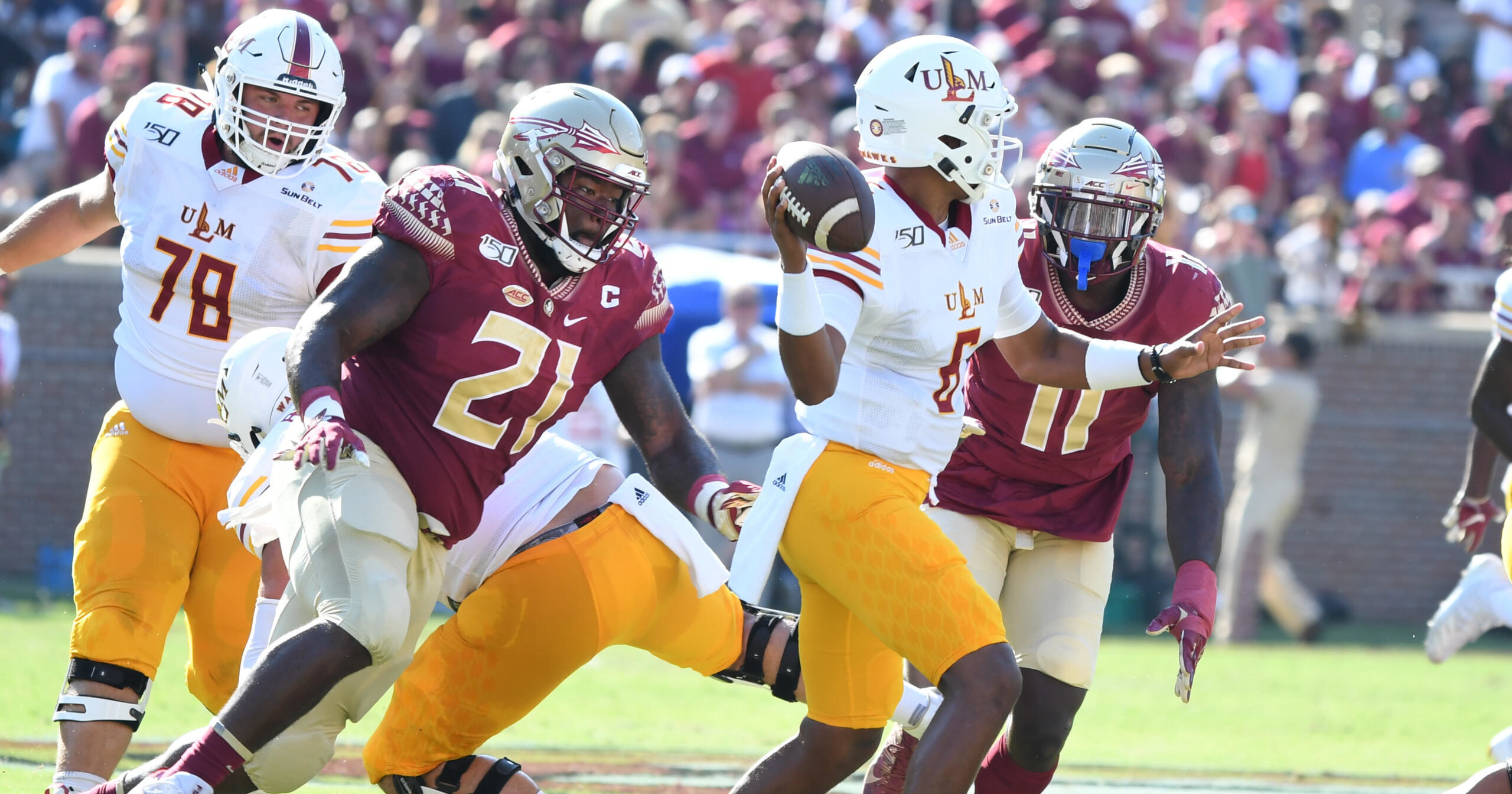 The unit was at best inconsistent in 2019, finishing 90th in total defense. However, there is a lot to like for this group in 2020. Ten starters are expected to return, alongside an abundance of promising young talent.

New defensive coordinator Adam Fuller will also be a key aspect in turning things around. He did an excellent job of upgrading the Memphis defense in 2019, and now has a roster full of blue-chip talent.

Let’s take a look at what Florida State’s defense has to offer in 2020.

Florida State’s defensive front is nothing short of an unstoppable force. In fact, this defensive line could be among in the top five defensive lines in all of college football for 2020.

Marvin Wilson leads the pack, turning down a potential first-round NFL Draft opportunity to return for his senior season. With a pass-rushing grade ranked second in all of college football by Pro Football Focus, he is an absolute nightmare for opposing quarterbacks. Wilson alone is an imposing presence, but he is accompanied by Cory Durden and Robert Cooper.

Durden and Cooper have the size to plug gaps in the rushing game, and both have shown impressive pass-rush ability. These three, known as “The Mob”, look to form an unstoppable wall, striking fear in the hearts of opposing offensive coordinators.

The defensive ends for the Seminoles bring even more experience to the mix. Janarius Robinson showed improvement throughout last year, emerging as a solid pass-rusher by the end of the season. On the other end is former 5-star athlete Joshua Kaindoh. Unfortunately, Kaindoh’s season was cut short due to injury after only three games, but he had solid production before he went down. Kaindoh is a breakout candidate in 2020 if he can stay healthy, and should be a key starter in the Noles’ formidable defensive unit.

The Seminole secondary is one of the team’s most deep and talented position groups. Led by safety Hamsah Nasirildeen and All-ACC cornerback Asante Samuel, the defensive backs look to improve from allowing 277 passing yards per game and a 61% pass completion rate in 2019.

Samuel is a lock to start at corner on the long side of the field. He allowed only 12% of passes completed in press coverage in 2019, and was able to shut down nearly any receiver that came his way. Akeem Dent and Jarvis Brownlee look to rotate in behind him, as they had impressive camp showings.

Jarrian Jones has been making the most of his camp showing as well, all but securing his position playing corner on the boundary. He will likely share extensive playing time with proven playmaker Meiko Dotson. Both are transfers. Jones played at Mississippi State last season while Dotson led the nation in interceptions for Florida Atlantic.

At the free safety spot, Renardo Green and Travis Jay will fight for a starting role. These two are both stellar athletes, and have earned playing time with strong camps. They each have impressive coverage skills and neither shies away from the physicality required to be a safety.

On the other side of the field, one clear leader has emerged and his name is Hamsah Nasirildeen. The tackling machine was a force for the Noles in 2019, tallying 101 tackles, one sack, three forced fumbles, two interceptions, and one defensive touchdown. He will form a dynamic duo with Jaiden Lars-Woodbey, who has bounced back from suffering a season-ending knee injury in 2019 and performed impressively in the fall camp.

FSU’s linebacker corps left a lot to be desired last year. It was easily the defense’s weakest unit in 2019, looking lost at times and unwilling to be physical at others. New linebackers coach Chris Marve has the task of fixing this dysfunctional group. Marve is one of the top up-and-coming coaches in college football and has had success producing NFL Draft talent, so the Noles seem to be in good hands.

Senior Leonard Warner has emerged as a leader under the new coaching staff. He seems to have carved out a role as starter at the middle linebacker position. Following closely behind is true freshman Stephen Dix Jr., who has earned a lot of praise from the coaches and will push Warner for playing time as the season progresses.

Emmett Rice improved tremendously during the 2019 season and has solidified a role as starting weak side linebacker. Behind him is promising sophomore Jaleel McRae, who saw playing time in every game in 2019. McRae was inconsistent in limited playing time last year, but he has a high upside and has impressed this offseason.

No clear winner has emerged at the field linebacker spot. Amari Gainer has a small lead due to his experience, but Kalen DeLoach pushed him for reps in fall camp. Gainer figures to get the start for his consistency and ability to set the edge when required.

In 2018, he became the full-time defensive coordinator at Marshall. The Thundering Herd’s defense was unmovable, ranking eighth in total defense and ending the season as one of only three defenses in the country to keep every rusher under 100 yards. They ranked 13th in third-down conversion percentage, 12th in fumble recoveries, 17th in defensive touchdowns, and 20th in total takeaways.

His career continued when Mike Norvell hired him to coach the Memphis defense in 2019. The Tigers’ defense finished the season ranked 20th in the FBS in passing defense and 21st in tackles for loss.

The unit forced 18 takeaways on the season. Two went back the other way for touchdowns. Fuller’s defense helped the team win its first conference championship since 1969. The 12 wins for Memphis was a program record.

His players have earned 20 All-America recognitions and 59 all-conference honors. He has produced multiple defensive backs that have been taken in the NFL Draft as well. Fuller has shown he can develop talent. This season will showcase what he can do with a roster of blue-chip recruits.