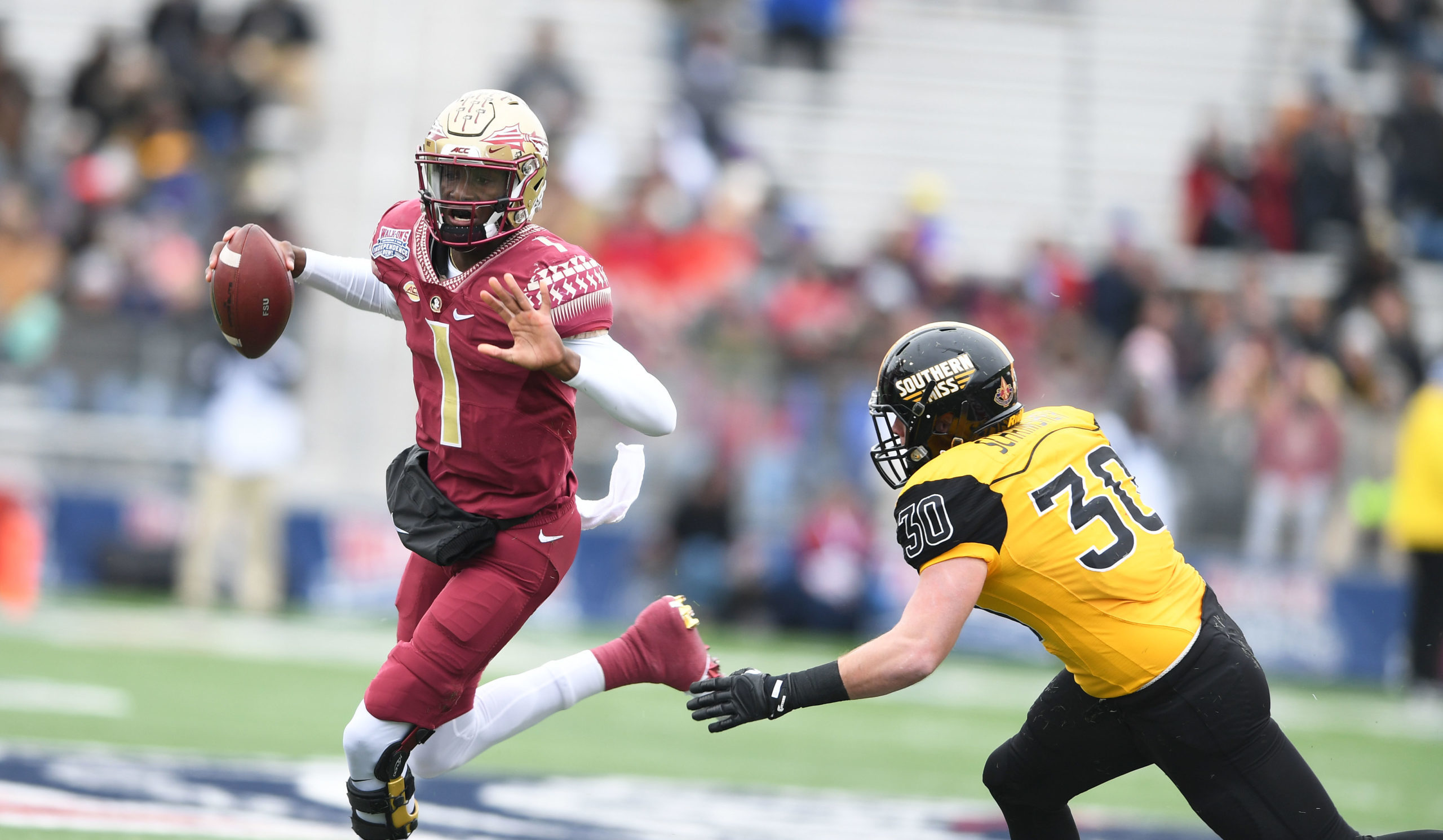 What seemed inevitable is now official.

On Tuesday, Florida State head coach Mike Norvell named redshirt junior James Blackman as the team’s starting quarterback. It has been an an up-and-down career for Blackman to this point.

Largely regarded as a good leader and teammate, consistency has not been there for Blackman thus far. Part of that however, is beyond his control.

Blackman has been forced to operate behind a dismal offensive line and will be playing under a fourth different offensive coordinator in as many years. Though there has been some bad, there has been plenty of good.

Here’s a look at the top five moments for Blackman at FSU thus far:

Florida State 14, Arizona State 20
Dec. 31, 2019 (Sun Bowl)
Last season’s Sun Bowl was not James Blackman’s finest moment, but he did set a record in the contest. With FSU trailing 12-7 in the third quarter and backed inside its own 10-yard-line, Blackman let one fly. With just over a minute left in the period, Blackman hit Tamorrion Terry in stride. Terry outraced defenders down the sideline for a 91-yard touchdown — the longest passing play in Sun Bowl history. The longest scoring strike gave the Seminoles their first lead of the day.

4. Blackman Has Career Day in Raleigh

Florida State 28, (21) NC State 47
Nov. 3, 2018
As a sophomore in 2018, Blackman made just one start for FSU, but he left fans wanting more. In a loss to No. 21 NC State in Raleigh, Blackman single-handedly kept the Seminoles afloat. Blackman finished 29-for-46 passing with 421 yards, four touchdowns and one interception. The 421 yards passing was the most for an FSU quarterback since Jameis Winston passed for 444 yards against Clemson during Florida State’s national championship season of 2013.

Southern Mississippi 13, Florida State 42
Dec. 27, 2017
The first true freshman to start at quarterback for Florida State in 32 years, Blackman’s freshman campaign couldn’t have ended much better. After leading the Seminoles to three straight wins to extend the nation’s longest bowl streak, Blackman helped run FSU’s streak of winning seasons to 41. In the Independence Bowl against Southern Mississippi, Blackman finished 18-for-26 passing for 233 yards and four touchdowns in an FSU rout. Three of his touchdown passes went to Auden Tate as Blackman shared MVP honors with safety Nate Andrews.

Florida State 26, Wake Forest 19
Sept. 30, 2017
0-2 for the first time in nearly three decades, Florida State was trying to avoid an 0-3 start as it found itself tied with Wake Forest in the final minute of a 2017 contest in Winston-Salem. With the score knotted at 19 and Blackman making his first career road start, the Seminoles came up with a big stop late. With less than a minute to play and the Seminoles starting at the Wake Forest 40-yard-line, it took just one play for FSU to go ahead for good. Needing just a field goal, FSU went for the jugular. After carrying out his play fake, Blackman heaved one to the end zone. Wide receiver Auden Tate found himself in single coverage and made a diving grab in the end zone for a 40-yard touchdown to give FSU its first win of the season.

Florida State 38, Boston College 31
Nov. 9, 2019
At 4-5, Florida State was desperate for a win in its ACC finale against Boston College in 2019. The Seminoles had watched a 10-point lead slip away against Boston College as they took over at their own 41-yard-line with just over two minutes to play in a 24-24 game. FSU lost a yard on first down, but that would prove to be no big deal. On 2nd-and-11, Blackman connected with D.J. Matthews on a slant over the middle. Matthews was able to catch the ball in stride and weave through defenders before diving for the pylon to complete a 60-yard touchdown. The scoring strike put the Seminoles ahead for good as they collected their only road win of 2019. Blackman finished with 346 yards passing and three touchdowns. FSU would beat Alabama State a week later to become bowl-eligible for the 42nd time in 43 years.