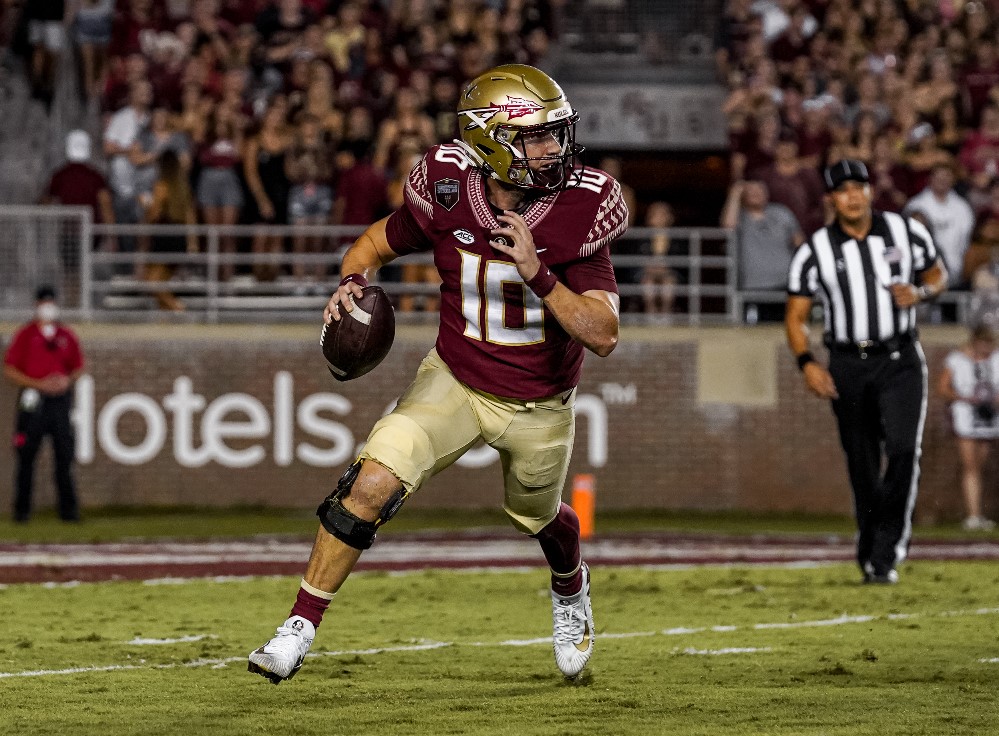 It’s that feeling you get when you walk down the stairs on Christmas Day and discover that Santa Claus didn’t deliver on all his promises. That feeling when your high school crush doesn’t like you back or when you deliver that bone-crushing line to your kids, “I’m not mad, I’m just disappointed.”

As a college football fan however, disappointment can come in all different sizes, shapes and forms. Maybe your favorite team isn’t producing the way you would want it to. Maybe the player you predicted to win the Heisman Trophy has already taken a seat on the bench.

Whatever the case may be, the feeling of distress runs rampant throughout the college football world. Let’s now take a look at the five biggest disappointments thus far in 2021:

No one likes people who complain about officiating, but we can no longer bite our tongue. It’s hard to remember a time, where we have seen so many blown calls and so many crucial errors in such a short amount of time.

Penn State punted on third down after an officiating mix-up 😳 pic.twitter.com/dG1Xw9VqRq

It does not matter if you are talking about the blown call at the Liberty Bowl or the loss of down in Happy Valley, terrible officiating can be seen almost anywhere you look.

Things have gotten so bad that in fact, those replacement referees we saw in the NFL during the 2012 officiating lockout would be a welcomed addition. Get it together!

Mississippi State got hosed last night. The SEC has admitted to several officiating errors on this punt return TD, that wound up being the difference in the game pic.twitter.com/D63t2X0ugR


When Florida State hired Mike Norvell to be the next head coach of its historic football program in 2020, the expectations were high. Norvell, who had experienced an abundance of success at Memphis, was an attractive hire. Frankly, the Seminoles seemed lucky to get him.

Fast forward a year into the future, however, and Norvell currently sits with a record of 3-9 during his first 12 games as man in charge. Now granted, last year was a COVID-19 year, so any real judgment towards Norvell’s debut season should be thrown out the window. With that being said, there is absolutely no excuse for the 0-3 start that the Seminoles are off to in 2021.

The matter of the fact is this: Florida State, which is one of the most cherished football programs in America, is in a dire situation. The Noles sit 0-3 for the first time since 1976. They’re coming off a loss two weeks ago in which they were defeated by an FCS team for the first time in program history.

JACKSONVILLE STATE (not in Florida) WITH THE MIRACLE AGAINST FLORIDA STATE.

College football is SO BACK. pic.twitter.com/zjbslVjwy6

There are good teams and there are bad teams. There are 15 layers of dog crap, and then there sits the current state of FSU football.

At this point, it seems hard to comprehend how this team took Notre Dame to overtime in the opener.

We’ve all heard this phrase before from an Oklahoma fan, “I’m telling you, this year is gonna be different…we are going to win the national championship.” And while the glitter and glamour of a Lincoln Riley-led offense may look appealing from the outside, the fact of the matter is that when push comes to shove, it always comes up just a tad bit short.

Is Oklahoma is a talented team? Yes. But there is just no way in heck this is the fourth-best team in the country. Here’s some perspective: Oklahoma opened its season up with a 40-35 nail-biting win at home against Tulane. While Tulane head coach Willie Fritz has a good thing going with his program, this is a team that just got beat by 40 against Ole Miss on Saturday night.

Additionally, Oklahoma’s offense, which fans love to rave about, is just not that good. Saturday’s 23-16 win over Nebraska showed the inconsistencies and a lack of rhythm on offense.

Spencer Rattler, who is supposed to be Oklahoma’s next great Heisman-winning quarterback, continued to force balls into double coverage. He also attempted to play “hero ball” as opposed to making the smart reads on third down.

At the end of the day, Oklahoma is still talented enough to win a sixth straight Big 12 championship. But make no mistake about it: this is not a playoff-caliber team.


The 2021 Ohio State Buckeyes are like a beautiful oceanfront listing on Airbnb. When you look at the listing, you are amazed by the oceanfront views and the hot tub that is listed as part of the amenities. However, when you and your buddies get there, the view is blocked off by a 10-foot sand dune and the hot tub that was listed is about as broke as a college kid halfway through the spring semester.

Ohio State on paper, is a super team. It has arguably the best receiving corps in the nation, highlighted by Chris Olave and Garrett Wilson, a freshman running back in TreVeyon Henderson, who has already drawn comparisons to Archie Griffin and a quarterback in CJ Stroud, who coming out of high school, was said to be the next big thing.

So how, in all that is good with this great sport, could this team possible struggle at home vs. a program like Tulsa?

There is only one answer.

It goes without saying, that the quarterback is the most important position on the field. He is the leader on offense and the commander of your ship. In many ways, the signal caller is the key piece to your puzzle. Having said that, if that puzzle piece doesn’t fit absolutely perfectly, you will be forced to head upstream without a paddle.

Stroud isn’t the worst quarterback in the country by any stretch of the imagination. Stroud thus far however, has failed to live up to the standard expected of an Ohio State quarterback.

When you put on that grey and scarlet helmet, you are following in the footsteps of some of the best college gunslingers in recent history: Names like Justin Fields and Troy Smith, Terrelle Pryor and J.T. Barrett. If Stroud wants to one day join this illustrious fraternity, he is going to have to turn his game up a level.

Keep in mind however, that he is just a freshman.


Clemson almost occupied the top spot as a whole. Frankly, that wouldn’t be fair to the amazing job that coordinator Brent Venables is doing with his defense. The Tigers currently sit as the only defense in the FBS that has yet to allow a touchdown — a pretty awesome feat.

It is a shame because the defensive efforts are being completely drowned out by the absolute train wreck that is Clemson’s offensive attack.

This is Clemson, folks. CLEMSON. And who knows? Maybe our brains are just wired to believe that the Tigers are supposed to just dominate year in and year out, but seeing them struggle like this is almost foreign.

Trevor Matich talks about the "abysmal" Clemson offense, DJ Uiagalelei's play this year, and the weak play of their offensive line, at least compared to last year. pic.twitter.com/2qgKgQXock

Watching last week’s contest against Georgia Tech, you would have assumed that Geoff Collins’ defense was the reincarnation of the 1985 Chicago Bears. The Tigers could not move the ball downfield if it meant life or death.

The worst part about all of this is that quarterback DJ Uiagalelei, a popular preseason pick to win the Heisman Trophy, looks about as lost as a newborn puppy. This is a guy, who is rumored to be making over $1 million in NIL deals.

He currently has just one touchdown pass and two interceptions. That’s not a typo. Do you think Dr. Pepper is happy about that?

The last time Clemson missed the College Football Playoff was in 2014 — its first year of existence. At this rate, it will be lucky to even sniff the Famous Idaho Potato Bowl.

OK, it’ll probably do a little better than the Potato Bowl.