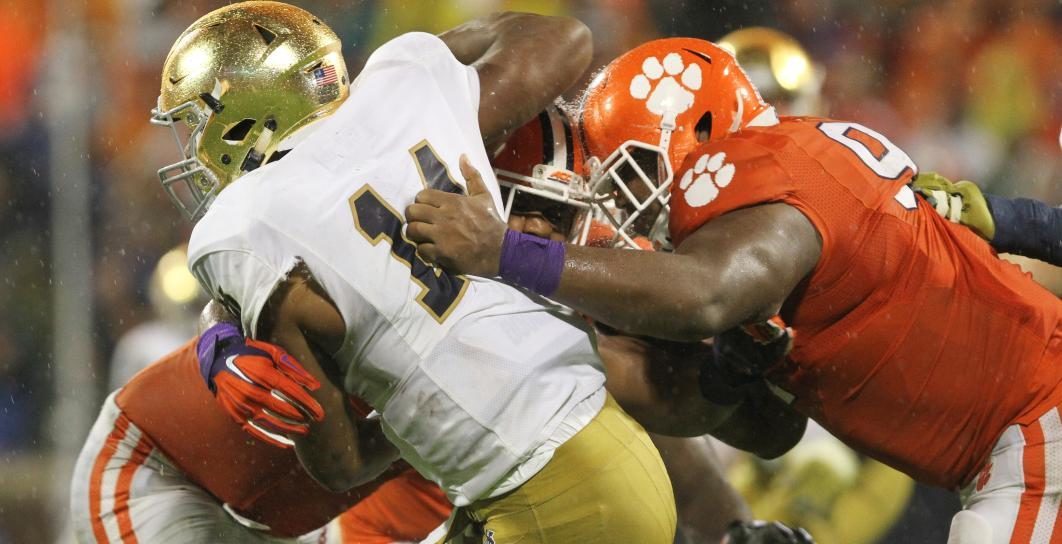 A popular ACC Championship game pick for 2020 was Clemson and Notre Dame.

The two programs have averaged more than 10 wins per season since 2017. All-time however, the teams have met just four times ever.

The last regular season meeting between the teams was an absolute thriller and it happened on this day five years ago. Notre Dame was able to whittle an 18-point Clemson lead down to two, but a tying 2-point conversion try in the final seconds was no good as the Tigers prevailed, 24-22.

Both teams were undefeated as they arrived at Memorial Stadium on Oct. 3, 2015. The 3-0 Tigers were ranked No. 12 in the country, but had struggled at Louisville the previous week.

Notre Dame was ranked No. 6, but at 4-0, had also been tested. The Fighting Irish had rallied for a win over Virginia early in the season and held off Georgia Tech the week prior to visiting the Tigers. For three quarters, it appeared as though they would be no match for Clemson.

Through three quarters, the only touchdowns had come courtesy of Clemson quarterback Deshaun Watson. After throwing first-quarter touchdowns to Jordan Leggett and Artavis Scott, Watson ran for a 21-yard touchdown less than a minute into the second half to give the Tigers a commanding 21-3 lead.

That lead held until the early parts of the fourth quarter. Momentum seemed to change when Cole Luke intercepted Watson in the end zone late in the third period.

Notre Dame proceeded to march 80 yards in just four plays. With less than a minute gone in the fourth quarter, Notre Dame found the end zone when quarterback DeShone Kizer found running back C.J. Prosise for a 56-yard touchdown. From there on, it was all Fighting Irish.

The 2-point try was no good and Clemson did answer with a field goal on the ensuing drive. As was the case on the previous drive, Notre Dame needed just four plays to find the end zone. After a pair of runs and a 33-yard completion to Chris Brown, Kizer scored from three yards out to cut the lead to 24-16.

The Clemson offense could do little against the Notre Dame defense, but after a 3-and-out, Kizer threw a costly interception. B.J. Goodson’s pick of Kizer set the Tigers up in Notre Dame territory, but kicker Greg Huegel was unable to make good on a 45-yard field goal. With less than five minutes to go, it remained a 1-score game.

After three straight Kizer completions moved Notre Dame into the red zone, the Fighting Irish were victims of another costly mistake. Facing 2nd-and-10 from the Clemson 12-yard-line, Kizer found Brown inside the 5, but he fumbled and Clemson recovered with less than two minutes to go.

The Fighting Irish stood tall on defense again and took over at the Clemson 32-yard-line with just 50 seconds remaining. Notre Dame’s final drive started with a sack and an incomplete pass, but Kizer calmly completed passes to Amir Carlisle and Prosise to move the ball inside the Clemson 2. With seven seconds to go, Kizer found Torii Hunter Jr. for the 1-yard touchdown.

With the score now 24-22, Notre Dame needed a 2-point conversion to force overtime. The Fighting Irish kept the ball in Kizer’s hands, but this time on a designed run. As Kizer reached the 2-yard-line, he was met by Clemson’s Carlos Watkins.

Kizer was short and the Tigers had survived.

Notre Dame finished with 432 yards of offense compared to 296 yards for Clemson, but four turnovers were too much to overcome.

Notre Dame would win its next six games to improve to 10-1 and ascend to No. 4 in the polls. Unfortunately for the Fighting Irish, they dropped their final two games to Stanford and then Ohio State in the Fiesta Bowl.

Clemson finished the regular season undefeated before beating North Carolina for its first ACC title since 2011. The Tigers knocked off Oklahoma in the Orange Bowl as part of the College Football Playoff before coming up short against Alabama for the national championship.

Still, the 14 wins at the time stood as a program record for Clemson. Among those, a hard-fought 24-22 win at Notre Dame was the most thrilling. It happened on this day a half-decade ago.