It is Sept. 26 and Clemson has virtually been eliminated from playoff contention.

Let that one sink in for a second. It was another outstanding week in college football.

Here’s a look back on the top five performers from across the country for Week 4. 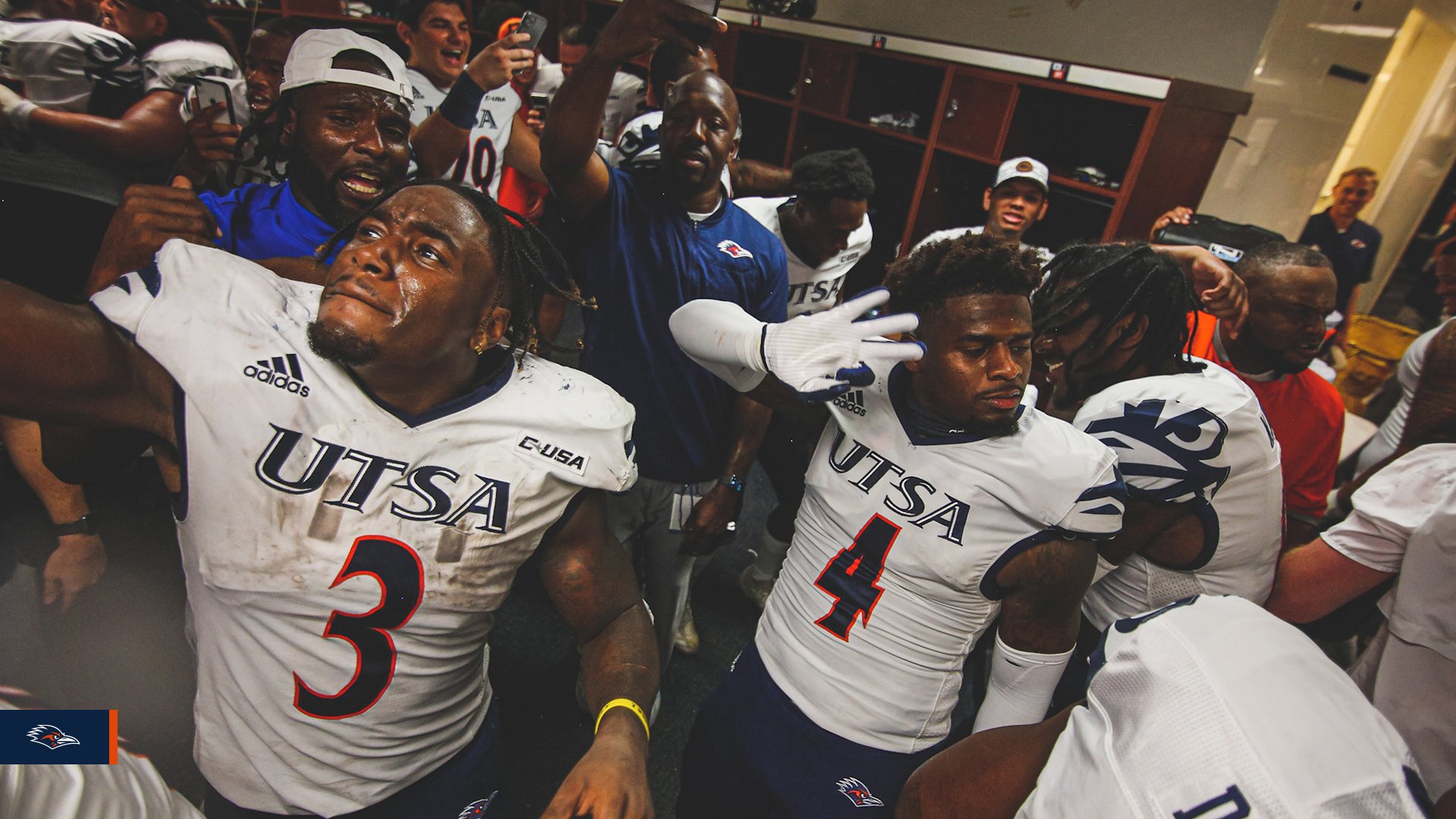 If you have not yet jumped on the UTSA bandwagon, hop on soon. What Jeff Traylor has been able to do with this program in just his second year in charge, is nothing short of exceptional. UTSA is 4-0, which includes two monumental road wins at Illinois and this past Saturday, at Memphis.

Sometimes, to come away with a win on Saturday afternoon, you need a performance that goes above and beyond. And for the Roadrunners, who found themselves trailing at the Liberty Bowl by 14 points late in the third quarter, that is exactly what they got.

We've got a game at the Liberty Bowl!

Sincere McCormick is not the type of guy who is going to kill you with his speed, nor will he wear you out with his physicality. With that being said, the 5-foot-9 junior from Texas has a motor like you wouldn’t believe. During Saturday’s win, McCormick collected 184 yards on 42 carries, to go along with three rushing scores.

It seemed as if the shifty back only got stronger as the game progressed. And it’s almost symbolic because if any of you watched the show “Looney Tunes” growing up as a kid, the Roadrunner was a character that never ran out of gas. 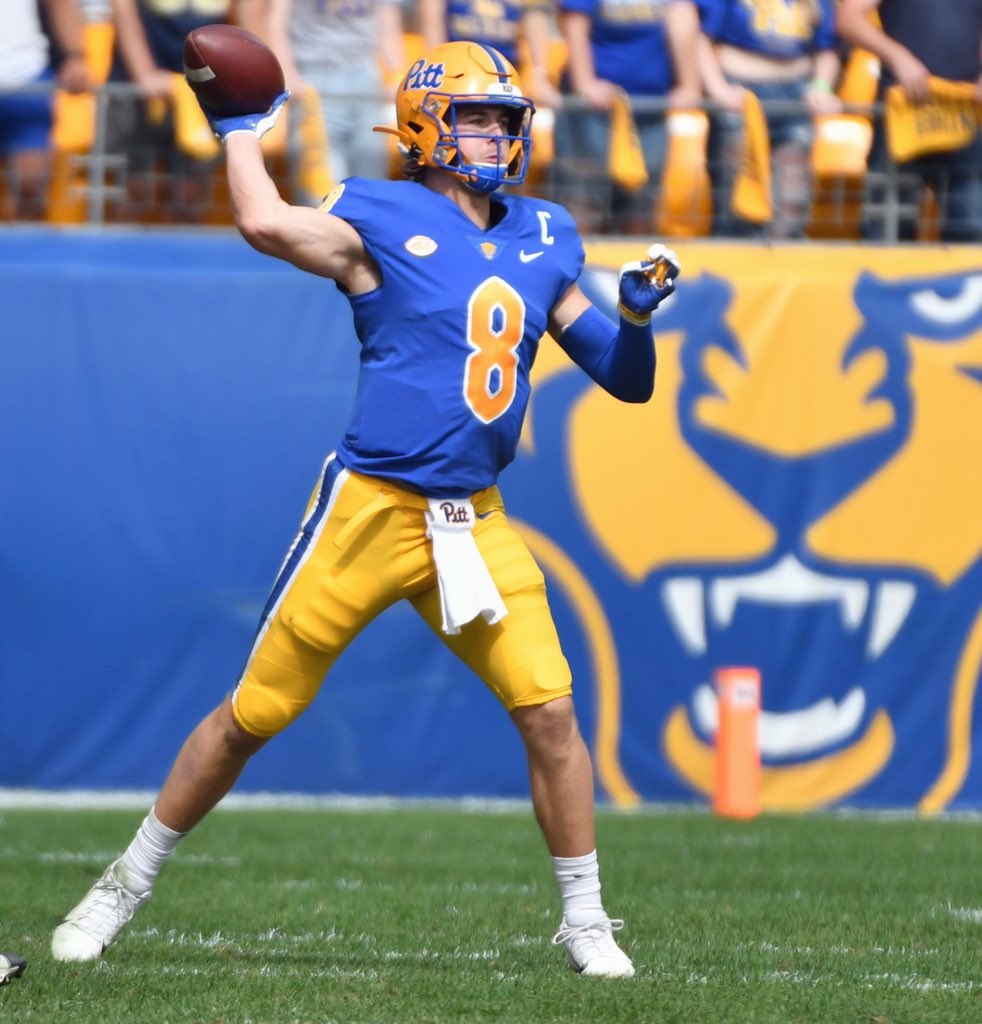 What a rollercoaster of a season it’s been thus far for Pat Narduzzi and the Pittsburgh Panthers. Three weeks ago, the Panthers made their way to Neyland Stadium, where they defeated a non-conference Power 5 team on the road for the first time since 2008. Pretty impressive, right? Well, that momentum was completely shot out of the sky when Pitt was defeated the following week at home by Western Michigan.

That’s right. One week after beating an SEC team on the road, Pitt came home and lost to a team from the MAC.

That now brings us to this week, where Pitt was victors against New Hampshire to the tune of a 77-7 drubbing. While the Wildcats are an FCS cupcake, it is still wildly impressive to go from losing a game to Western Michigan to winning a game by 70 points seven days later.

One player who gets a ton of credit in terms of Pitt’s success on Saturday afternoon was senior quarterback Kenny Pickett. The 10th-year senior — that’s a joke — put on a good, old-fashioned cupcake clinic, going 24-for-28 passing with 403 yards, five touchdowns and no picks. Pickett is the type of quarterback who can become unconscious when he starts to feel it. We saw it against Miami his freshman year and during that wild upset against UCF in 2019. 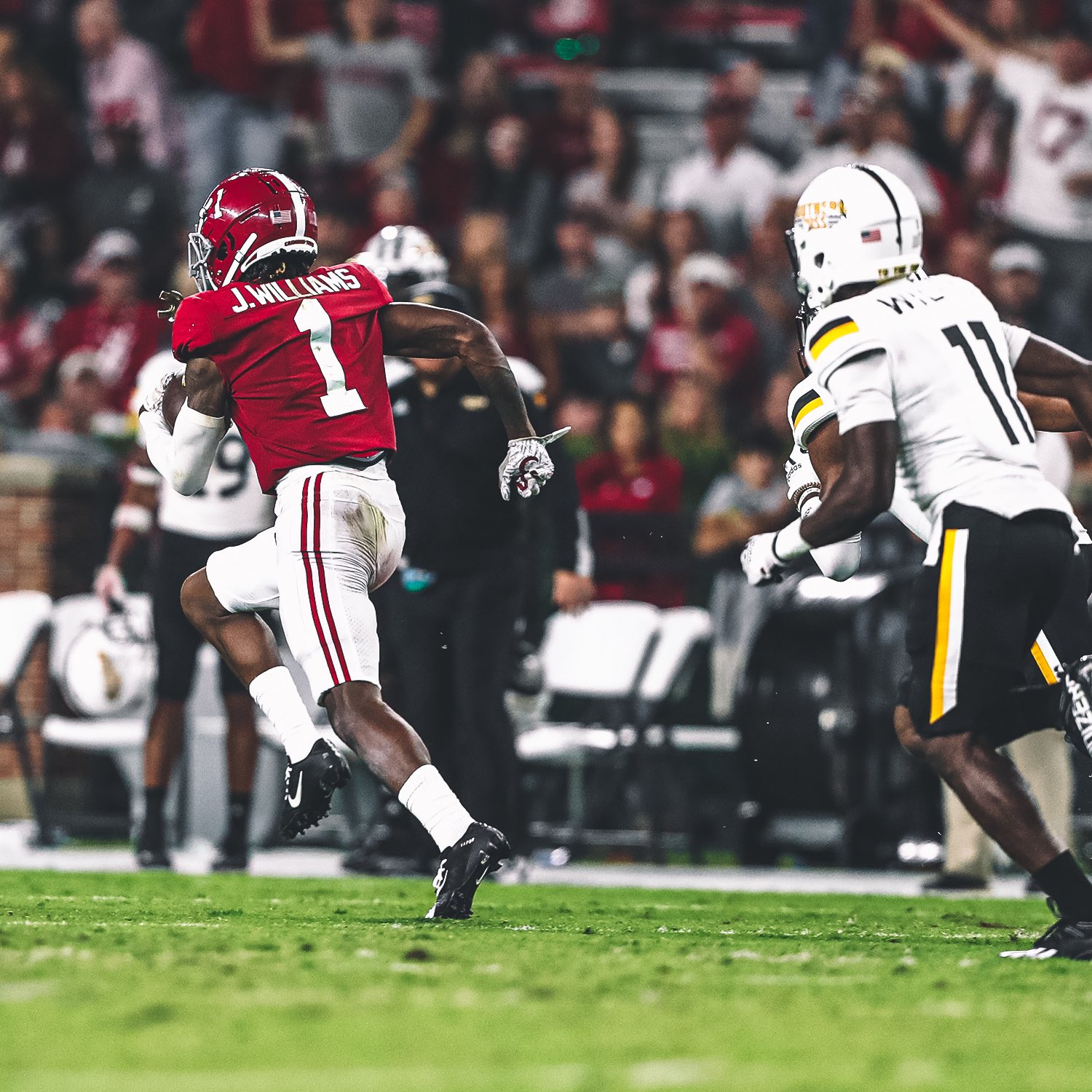 As the old saying that goes, “the rich will always get richer.” And when talking about the power structure of college football, that sentiment couldn’t be more true. See, Alabama is always going to be Alabama. It doesn’t matter how many players the Crimson Tide lose to the draft or graduation, they are going to restock with the best, most athletic recruits and transfers the country has to offer.

See, everybody wants to play for a winner. And Alabama is as powerful and successful as a program as you will find.

Jameson Williams is a 6-2, 189-pound wideout from St. Louis. Ever heard of him before?

After the show the Ohio State transfer put on Saturday night, it won’t be long before he’s a household name. During Saturday’s 63-14 win over Southern Mississippi, Williams showed a glimpse of Devonta Smith, returning two kickoffs for touchdowns as well as hauling in a touchdown reception for 81 yards.

Williams became the first player in Alabama’s illustrious history to return two kickoffs for touchdowns in the same game as well as the first player since 2004 to return a kick 100 yards. This is a player who had just nine receptions for Ohio State last season. Oh, how the rich get richer. 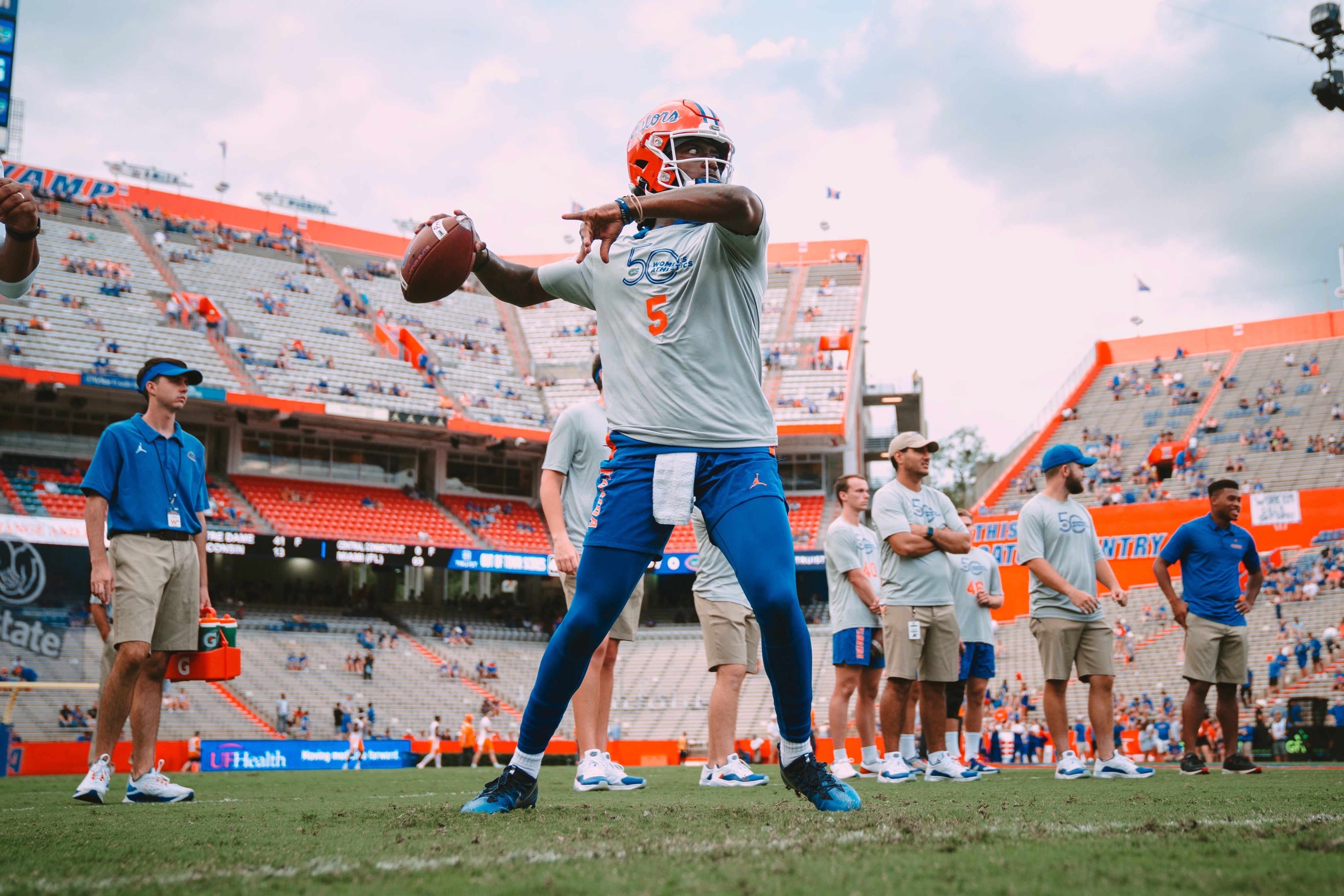 On this very site just a few weeks ago, someone sat behind his laptop and wrote the following: “If Dan Mullen is smart, Emory Jones will not take a snap for the rest of the season. The Gators welcome in the Crimson Tide of Alabama next Saturday and if Florida has ANY chance of pulling off the stunner, Richardson is going to have to be the man in charge.”

We don’t know if Jones personally read that column and used it as motivation. But since that excerpt, the junior quarterback has been a completely new man.

We have to acknowledge the fact that Anthony Richardson has not seen a down during the last eight quarters, as he is in the process of nursing an injured hamstring. But still, Jones has earned his starting job over the last two weeks of the season.

During Florida’s 38-14 win over Tennessee on Saturday night, the 6-2 dual-threat playmaker took his game to a new level. It was almost as if he knew about the pressure the media was placing on him and said, “put this on tomorrow’s headlines.”

By day’s end, Jones had finished with 209 yards through the air, two touchdown passes and 144 rushing yards — not a bad day at the office. Richardson still probably has a higher upside than Jones. But if this week showed anything, it was that head coach Dan Mullen has one of the deepest, and most talented quarterback rooms in the entire country. 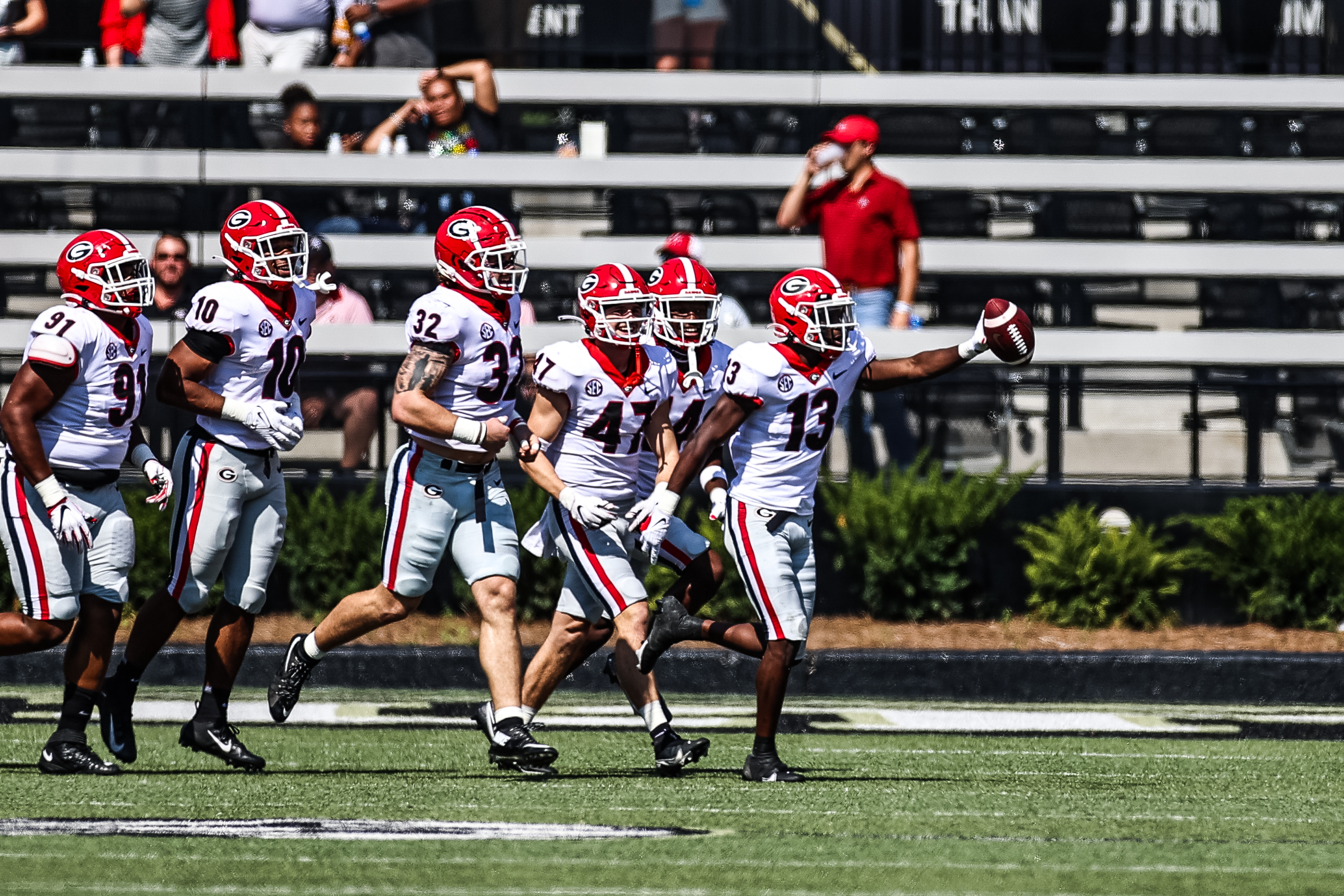 To say that Georgia head coach Kirby Smart gets to trot out one of the most talented defenses ever on a weekly basis may seem like hyperbole. But let’s just let the numbers do the talking for themselves.

77. This is the amount of total yards Georgia’s defense gave up during Saturday’s win against Vanderbilt. Oh yeah, this was a road conference game. The Bulldogs were not playing Roast Beef State in Athens.

24. This is the number of yards passing Vandy finished. Twenty. Four.

Zero.. The total amount of points Vanderbilt scored on its way to a 62-0 loss on Saturday afternoon. You get the picture.

At the end of the day, Vandy is gonna Vandy. The Commodores just aren’t a very good team. But we would be doing the world a disservice to not acknowledge the absolute brilliance that is the 2021 Bulldogs’ defense.

This author said on his podcast last week that all Georgia’s offense has to do to win a national championship is realistically score 20 or 25 points per game. If we’re being honest, the number can probably be significantly smaller than that.