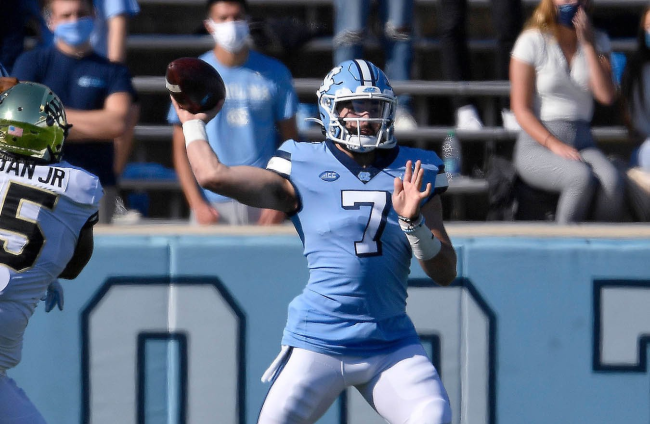 So who’s going to have a season to remember? Who may have one to forget? It’s time for our official projected ACC Coastal division standings just ahead of Thursday night’s kickoff in Raleigh between South Florida and NC State.

The Tar Heels may possess the best quarterback in the country when it comes to Sam Howell. Howell loses his top two receiving threats in Dyami Brown and Dazz Newsome, and the losses of Michael Carter and Javonte Williams in the backfield don’t help either.

Head coach Mack Brown and company have softened the blow with the additions of Tennessee transfer Ty Chandler, and the recruitment of top-tier receiver Josh Downs.

Defensively, the Tar Heels return 10 of 11 starters, and the entire offensive line comes back as well. Overall, this is going to be an extremely talented North Carolina football team. It’ll win the Coastal, but it won’t exactly live up to the preseason hype. Losses to Pittsburgh and Notre Dame away from Chapel Hill will do them in, before a surprising defeat to NC State puts the capper on the Heels’ regular season.

After all, this is the same team — minus a few weapons — that lost to lowly Virginia and Florida State last season.

The ACC Coastal may be one of the better front-loaded quarterback divisions in college football. That continues with star signal caller D’Eriq King.

King’s got something to prove. The Houston transfer tore his ACL in last year’s Cheez-it Bowl loss to Oklahoma State, and he’ll be ready to show the country that he’s the same player he was before going down to a stomach-twisting injury.

He’s got some weapons who will help him out as well. While tight end Brevin Jordan left Coral Gables for a paycheck, receivers Mike Harley and Mark Pope are still around. Running back Cam’Ron Harris will still be patrolling the backfield.

Defensively, Jaelen Phillips and Quincy Roche’s departure possesses some big question marks for the Hurricanes’ defense. But linebacker Zach McCloud will hold down the fort.

One could argue from a pure playmaker standpoint that Miami returns much more production than Coastal counterpart North Carolina. But the game’s in Chapel Hill. That is what will ultimately cost Miami its first division title since 2017.

An obvious loss to Alabama to kick off the season and a head-scratching loss to Florida State will keep Miami away from Charlotte once again.

There may not be another team in the ACC that had the entire outlook of its season turned around the way the Pitt’s did following the announcement of the return of quarterback Kenny Pickett.

It’s not just Pickett; the Panthers also return backfield star Vincent Davis. Top targets Jordan Addison and Shocky Jacques-Louis are there for the fourth-year starting quarterback to throw to.

On the defensive side of the ball, the losses of Patrick Jones II, Paris Ford, and Rashad Weaver may come back to bite Pat Narduzzi’s club when it comes to the gauntlet of the ACC Coastal. Six returning starters however, should help the cause.

Pittsburgh will start out the year 4-0 in non-conference play, but then will drop a dud in Atlanta to Georgia Tech. It will suffer two home losses to both Clemson and Miami on back-to-back occasions. The Panthers will run the table over the final four games of their season, which will include an upset of North Carolina to finish third in an underrated ACC Coastal.

A lot of uneasiness surrounds Blacksburg as head coach Justin Fuente will try to jump off the hot seat in his sixth year at Virginia Tech.

The Hokies will feature Oregon transfer Braxton Burmeister as the starting quarterback following a year of trading snaps with Hendon Hooker. But Burmeister’s the guy now; it’ll be interesting to see how he reacts.

The running back situation is up in the air. Raheem Blackshear, Jalen Holston, and Keshawn King are all set to take snaps. The receiver room is set with guys like potential first-round pick James Mitchell, Tre Turner, and Tayvion Robinson.

Defensively, the Hokies should be solid up front, but the secondary holds some big question marks, especially at both safety positions.

Virginia Tech is going to be a wild card, but ultimately, it’s going to be an average year for the folks at Lane Stadium. The Hokies will suffer defeats to North Carolina, Notre Dame, Pittsburgh, Boston College, and Miami.

You wanna talk about another wild card team in this year’s Coastal race? It’s going to be Bronco Mendenhall and his Virginia Cavaliers.

Quarterback Brennan Armstrong is a guy who can have a breakout game one day, and a game to forget another. Overall though, he’s solid, and is going to be a big threat for the Cavaliers when it comes to using his legs. Wayne Taulapapa also will help out when it comes to the ground game, and the majority of the receiving corps returns, including Billy Kemp, Keytaon Thompson, and Lavell Davis.

Defensively, well it should be interesting to say the least. The Wahoos’ defense allowed a whopping 423 yards per game and gave up more than 30 points per contest last season after a couple of decent seasons on that side of the ball.

The biggest question is Armstrong. If his passing game has developed, and the defense picks it up after being one of the worst in the league last season, the ‘Hoos will have a shot to be good. Unfortunately for Virginia, there’s just too many holes.

Geoff Collins has something going at Georgia Tech. The problem with shifting away from the triple option however, is that he’s not quite there yet — even in year No. 3.

He’s got some good pieces in place, though. Jeff Sims may be the most underrated quarterback in the ACC. Sims and wide receiver Malachi Carter create a nice pair in the passing game.

Jordan Mason will likely get the majority of the carries for a Yellow Jacket team that has moved away from running the ball. Dontae Mason sits behind him as a solid option for Collins and company.

The defense has some question marks heading into the 2021 season. Most intriguing however, will be the development of Sims, the Florida-native quarterback.

Collins is making progress, but it’s still going to be another rebuilding season down on “The Flats.” Losing to Clemson, North Carolina, Virginia, Virginia Tech, Miami, Notre Dame, and Georgia will signify just that. Optimism will continue to build however, as the Yellow Jackets will pick off both Pittsburgh and Boston College at historic Bobby Dodd Stadium.

The Duke Blue Devils had a good run for a few years with head coach David Cutcliffe guiding the way. But the Blue Devils may have long hit their peak.

Cutcliffe is one of the more respected coaches in college football, but that doesn’t necessarily transfer to wins.

Duke has glaring holes everywhere you look on the roster, and it’s hard to envision it winning a conference game when looking at the schedule.

Josh Bobo will be a fun receiver to watch, but an inexperienced quarterback and a defense that should struggle will result in the Blue Devils going winless in ACC play.

They’ll pick up wins against Charlotte, North Carolina A&T, and lowly Kansas. They’ll then close the season on an 8-game losing streak that could be Cutcliffe’s last hoorah after a fantastic run in the Bull City.