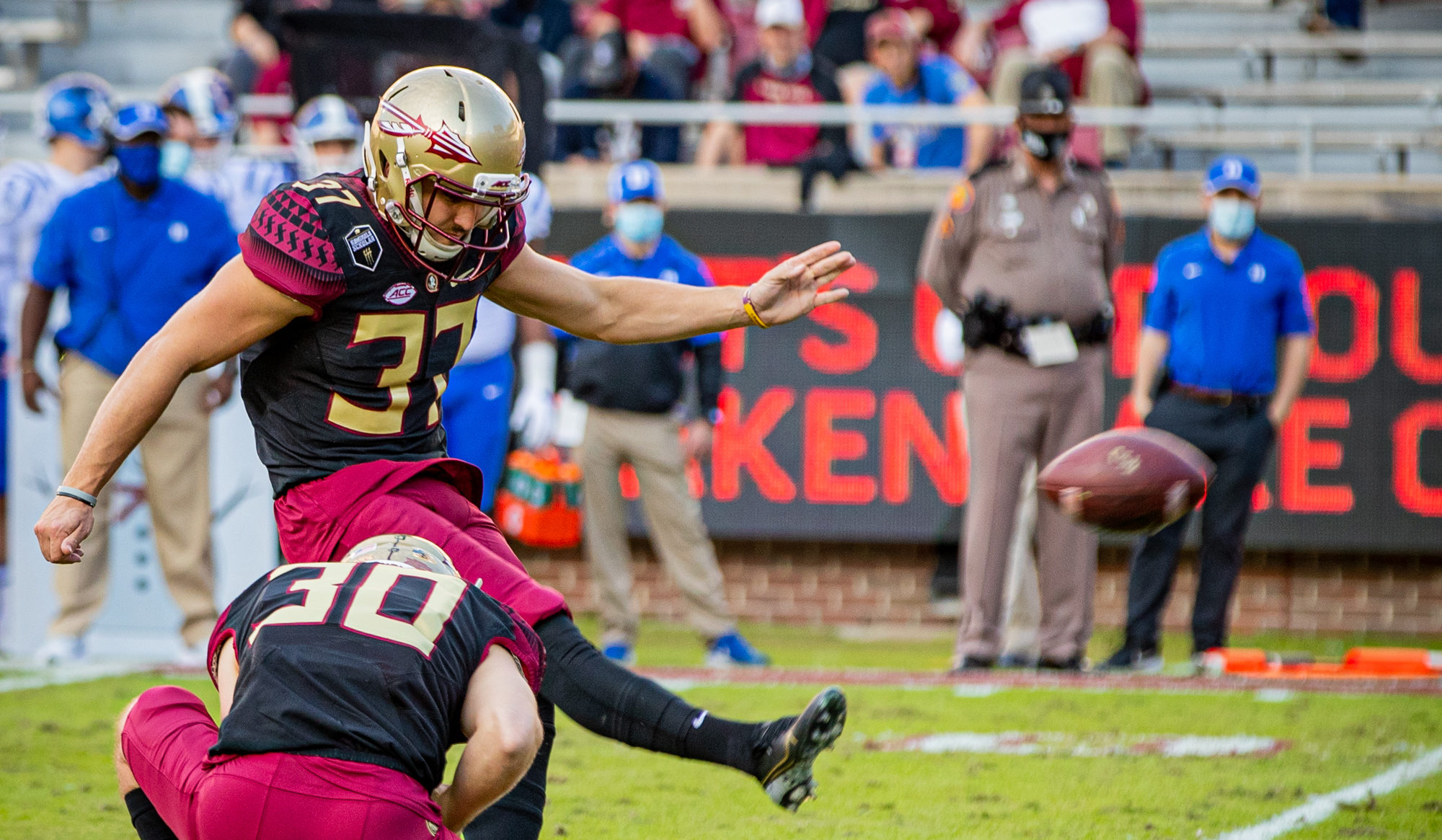 The COVID-19 pandemic, and its accompanying strange football season, are mostly in the rear-view mirror. The 2021 football season is shaping up to be a return to normalcy.

As for Florida State, head coach Mike Norvell is looking to the upcoming year as a coaching debut 2.0. His debut season was marred by the lack of a full offseason, a salvaged recruiting class, and COVID wreaking havoc on scheduling.

The up-and-coming coach’s first year at Florida State resulted in a disappointing 3-6 finish. In a series previewing FSU’s position groups, we take a look at a key for Norvell’s second season – special teams.

The Seminoles saw a massive turnaround in special teams efficiency last year. After ranking 75th and 82nd in the country in 2018 and 2019 respectively, the FSU special teams finished 2020 ranked 22nd. Norvell’s emphasis on special teams seems to be working for FSU.

Can the Seminoles build on last year’s success at the most overlooked unit on the field? Let’s take a look at the Seminole special teams crew:

Florida State is returning the majority of its punt production in Aussie Alex Mastromanno. The punter from down under averaged 43.5 yards per punt on his 35 punts in 2020. His production from his inaugural year resulted in FSU naming him Special Teams Freshman of the Year.

Former starter Tommy Martin transferred in the offseason, so the two-time all-state freshman Zane Smith will handle backup duties. Rivals rated the South Carolina product as the top kicker in the country for the 2021 recruiting class.

FSU’s kicking situation was an interesting one last year. Walk-on junior Parker Grothaus and scholarship freshman Ryan Fitzgerald both had their ups and downs. Norvell went with the hot hand as the season progressed. Both kickers finished the season making four of their seven attempts, but Grothaus ultimately won the starting job.

Grothaus was perfect in his PAT kicking, knocking down all 14 attempts. Meanwhile, Fitzgerald made 12 of his 13 PAT attempts. What eventually won Grothaus the starting job was his efficiency from deep.

Fitzgerald was just 1-for-4 on field goals past 30 yards with a long of 42. Grothaus was much better at kicking from distance, making 4 of 6 from deep with a long of 53. Grothaus was offered a scholarship in the offseason and is expected to earn the starting role going into 2021.

FSU returns a lot of options when it comes to kick returners. Travis Jay leads the way, with two punt returns for 20 yards and 10 kick returns for 229 yards. Also in the rotation were Keyshawn Helton, Ja’khi Douglas, and Corey Wren. Helton returned five kicks for 130 yards. Douglas took eight kicks for 158 yards, and Wren fielded three kickoffs for 45 yards.

Another name to look out for is sophomore transfer Jammie Robinson. The safety transfer was a return specialist in high school, scoring seven touchdowns as a returner in 2018. He saw limited action at South Carolina on special teams, but has impressed FSU special teams coordinator John Papuchis.

After serving as the Noles’ primary long snapper for a mixture of punts and kicks for three years, walk-on Grant Glennon has put his name in the transfer portal. Redshirt sophomore Garrett Murray will be taking over long snapping duties this season.

Murray saw his first action in 2020, serving as the long snapper for field goals and PATs in all nine games. He will continue his role as the primary long snapper in addition to picking up Glennon’s duties on the punt team.