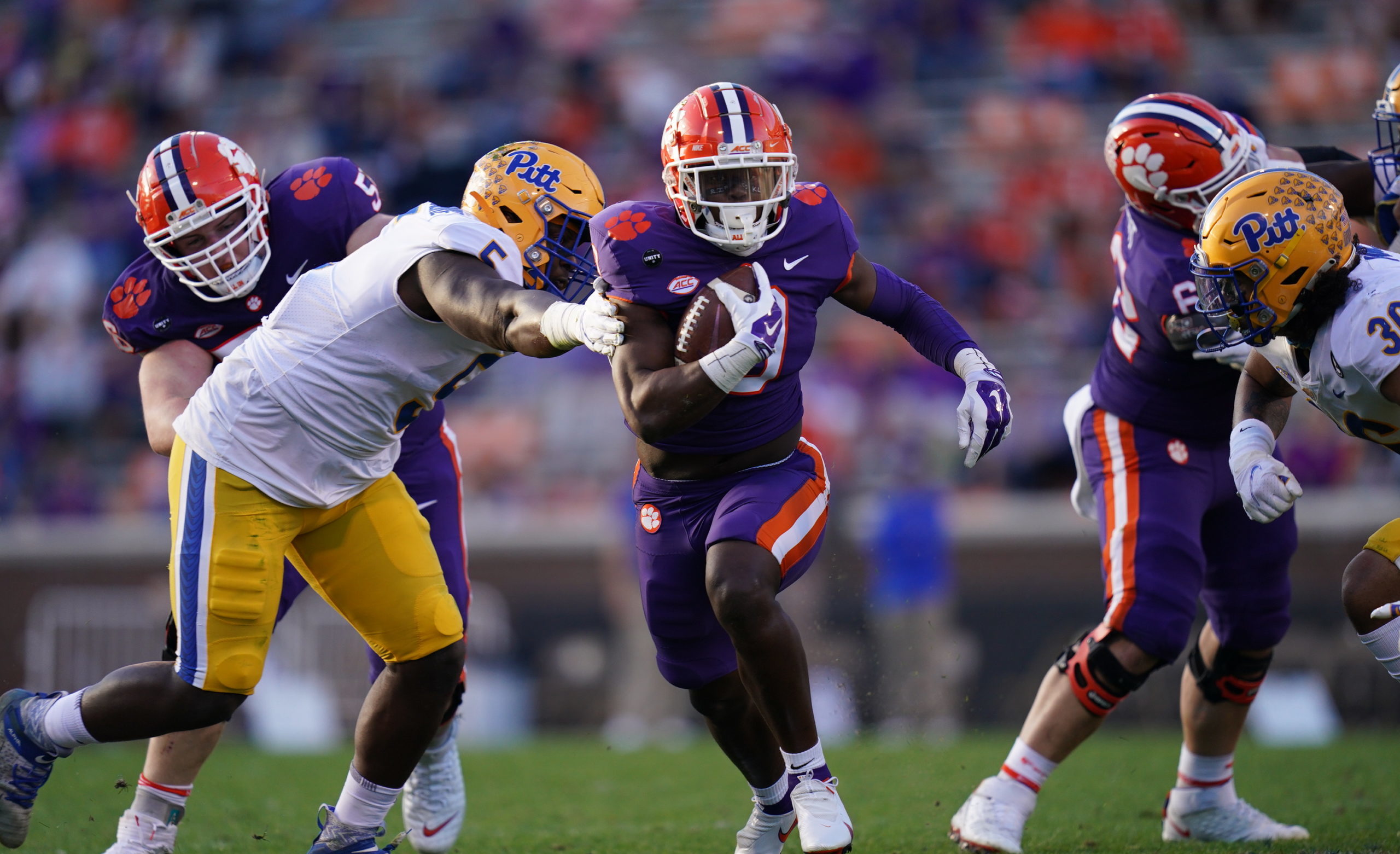 In the midst of several cancellations, the ACC was able to get five games in this week. None of the results were shocking but the process by which they occurred were not completely expected.

Here is a recap of each of the games from this weekend in ACC football:

North Carolina entered this one averaging over 43 points per game. Notre Dame (9-0) held the Tar Heels to by far their lowest offensive output this season, but was also easily the best defense North Carolina (6-3) faced.

The difference in this game was the play in the trenches. While Notre Dame’s Ian Book had 3.26 seconds to throw on average, per Pro Football Focus, North Carolina’s Sam Howell was provided just 2.52 seconds. However, Notre Dame’s six sacks was not completely on the offensive line either. Howell took four of his sacks when he was given more than 2.5 seconds to throw, indicating that when the pocket was clean, he was too indecisive.

In terms of accuracy, Howell was not different than usual. He was not outplayed by Book. Notre Dame just has an overwhelmingly large talent gap than a majority of the country. The Fighting Irish are a legitimate playoff team.

This game was much closer than expected. Some fluky events needed to occur but ultimately, Syracuse (1-9) showed fight. The reason the Orange are consistently losing is simply due to a relative lack of talent.

NC State (7-3) should not be considered fraudulent for this performance either. The Wolfpack allowed only 257 yards, including just three on the ground. The only reason Syracuse quarterback Rex Culpepper had a season-high through the air was that he threw the ball 45 times.

NC State’s Bailey Hockman turned the ball over twice but tallied 313 passing yards while completing 23 of 31 passes. Hockman still has issues picking up blitzes. He took six sacks, a majority of which came from defensive backs or linebackers.

But Hockman once again put his capable offense in a position where it could score points. Even with starting quarterback Devin Leary injured, the Wolfpack continue to win games.

Pittsburgh had an abysmal first quarter, as it was outscored 31-0. The Panthers (5-5) did show signs of life though by continuing to fight throughout the game.

Clemson quarterback Trevor Lawrence returned after a month off and left nothing behind. He was not flawless but made elite throws throughout the game that had NFL scouts drooling. Lawrence finished with 403 passing yards and two touchdowns.

Although Pitt was torched through the air, its defensive line played as advertised. Rashad Weaver continued his phenomenal season with two sacks and an additional four quarterback pressures. For most of the game, Weaver faced Clemson right tackle Jordan McFadden, who entered the week with a quality 82.9 PFF grade. This defensive line also held Travis Etienne to just 58 rushing yards.

Overall, the Panthers were simply outmatched by an angry Clemson program. The perception of either team should not change. The Tigers (8-1) just needed a dominating victory to get back on the right path.

With this victory, Boston College showed that it is a truly consistent team. Practically every week this season, the Eagles have shown up.

For Louisville (3-7), Dez Fitzpatrick had another great game. Whether Tutu Atwell has been either double-teamed or not on the field at all, Fitzpatrick has been a consistent downfield threat. He caught eight passes for 182 yards in this game, which elevated him to third in total receiving yards among ACC wideouts in 2020.

The Cardinals actually compiled 493 total yards of offense — 58 more yards than Boston College. However, they turned the ball over three times, which made the difference. This is the fifth time this year that Louisville out-gained its opponent, yet came up short on the scoreboard.

Boston College quarterback Phil Jurkovec had another efficient day with over 10 yards per pass attempt. However, backup quarterback Dennis Grosel deserves tons of credit too.

The former walk-on lost his job to the transfer this offseason, but has entered the game and done his job when called upon. In this game, Grosel had a critical 44-yard run on third down. That drive ended with the Eagles (6-4) taking a 27-13 lead.

This game was even uglier than anticipated. There was a total of eight turnovers, four turnovers on downs, and 175 penalty yards. During one sequence, there was almost two safeties on two consecutive plays.

Georgia Tech (3-5) did win in the way anyone would have expected though: the rushing game. Jahmyr Gibbs, Jordan Mason, Dontae Smith, and Jeff Sims combined for 364 rushing yards and 8.3 yards per carry. This ground attack puts the Yellow Jackets a step above a bottom feeder in the conference.

Duke (2-7) had the same problems as usual. Its turnover count on the season is now 30 — by far the worst mark in the FBS. The only thing to say to a Blue Devils fan is to be glad it is basketball season