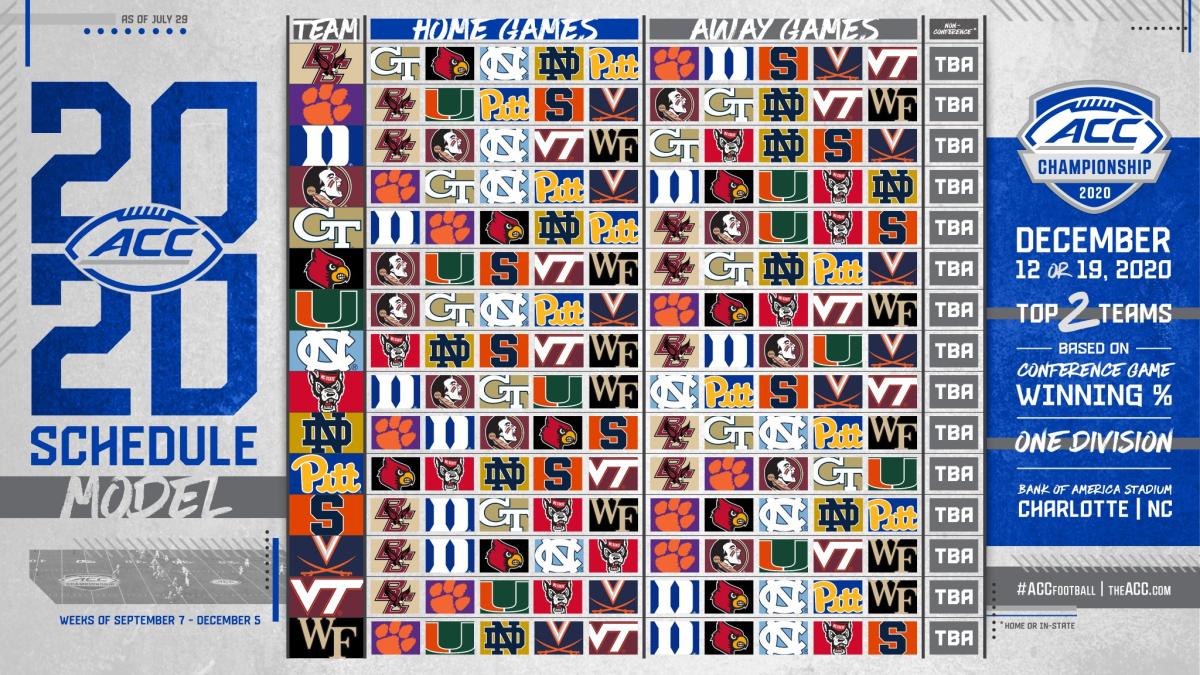 Photo courtesy of the ACC

There it is. After much anticipation, the ACC just recently released the new “10+1” list of opponents. The teams will play 10 conference games and one non-conference game for the 2020 college football season.

While many are still doubtful there will even be football played across our nation’s college campuses this fall, this is a major step forward. The ACC now has a plan heading into September, hoping to navigate the season through a pandemic.

The ACC has also added other details to compliment the new schedule. New details for the 2020 season are:

The most notable change in terms of standings, is that there will be no Clemson rolling through the Atlantic, and the “7-for-7” in the Coastal will be kept around for another year, as the ACC plans to only play one division in 2020. The two best teams, regardless of former division, will be competing in Charlotte.

This new scheduling alignment works to the advantage of some schools, while working to the disadvantage of others. We now take a look at some of the biggest winners, and biggest losers for the 2020 season.

The Tar Heels were one of the projected favorites to win the ACC Coastal in 2020. With star sophomore quarterback Sam Howell and company avoiding the likes of Clemson, Louisville, and Pittsburgh, while getting Virginia Tech and Notre Dame at home, Mack Brown’s squad is now beautifully set up to make their first trip to Charlotte since 2015.

The Cardinals avoided the one team they needed to in order to have a legit shot at reaching the ACC Championship game. By avoiding typical Atlantic foe Clemson, Scott Satterfield should be ecstatic on how Louisville is set up for the 2020 season. The Cardinals also get to enjoy the fact they host Florida State, Miami, and Virginia Tech inside Cardinal Stadium this season.

Dave Doeren and company need a big year to get the Wolfpack back on track, and judging by their 2020 schedule, they have a shot to get one. NC State dodged Clemson, Louisville, and Notre Dame. They also will welcome Florida State, Miami, and Wake Forest into Carter-Finley Stadium, as the Wolfpack are now set for a promising campaign in 2020.

The schedule for the Orange is brutal. Dino Babers’ squad likely took the toughest hit with the new 2020 schedule. Syracuse has to travel to Clemson, Louisville, UNC, Notre Dame, and Pittsburgh. The fact the Orange have to travel to five of the top six ACC schools in 2020 is puzzling to say the least. It’s a tough break for the Orange, but on the bright side for Syracuse fans, they weren’t a serious contender anyways.

It was a rough day for Virginia Tech football. After learning star cornerback Caleb Farley had opted out of the 2020 season, the Hokies received their schedule. Not only do the Hokies have to travel to North Carolina, Louisville, and Pittsburgh (as originally scheduled), they also now host powerhouse Clemson. The Hokies, once one of the Coastal favorites, now will likely have to win three of those four games in order to have a chance to make it to Charlotte. UNC and Louisville avoid both each other and Clemson.

The Eagles also got some tough luck in terms of scheduling in the ACC. BC hosts Louisville, UNC, Notre Dame, and Pittsburgh, while also having to travel to Clemson and Virginia Tech. On the bright side, Boston College has nothing to lose in Jeff Hafley’s first year at the helm, but it certainly has an opportunity to prove itself in the middle of a daunting schedule.

Now, the entire league will play the waiting game, as the ACC is on the clock to release a week-by-week schedule. Time will tell, but with the ACC at least putting a plan in place, it’ll be interesting to see how the SEC, Big 12, and other leagues respond as the college football season inches closer.