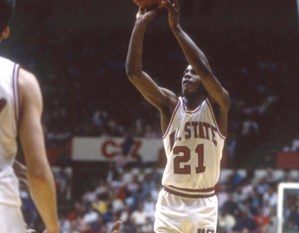 In the third part of our series, we go back to before the turn of the century. Here’s a look at the best to suit up for the Wolfpack during the 1990’s.

Rodney Monroe, Guard
Monroe was the 1991 ACC Player of the Year after averaging 27 points per game. He was the “Ice” half of Monroe and Chris Corchiani’s “Fire & Ice”. He broke David Thompson’s school scoring record in 1991 and is fourth on the ACC’s all-time scoring list with 2,551 career points. In 2002, Monroe was named to the ACC 50th Anniversary Men’s Basketball Team as one of the 50 greatest players in ACC history.

Chris Corchiani, Guard
“Corch” is one of the Wolfpack’s all-time players, fan favorite and stat sheet filler. He played alongside Rodney Monroe and Tom Gugliotta for head coach Les Robinson while in Raleigh. He was the first NCAA Division I player to record 1,000 assists in a career. During the 1990-91 season, he was No. 1 in the country in assists per game average (9.7). He’s the undisputed champion at drawing fouls in the open court. He’d sprint past the defense and suddenly slow down which caused the defender to run him over trying to catch up. It worked all four seasons. He was also fifth on the NCAA’s all-time steals list when he finished up in Raleigh.

Tom Gugliotta, Forward
“Googs'” path to Raleigh was somewhat of a weird one. The story goes that Gugliotta’s father called an old friend at NC State, Jim Valvano, during his senior season and told Valvano that his youngest son was going to be a special basketball player. Valvano took a chance on Gugliotta and brought him to Raleigh. During his junior season, Gugliotta began to show the potential his father had told Valvano about. Gugliotta averaged more than 15 points and nine rebounds per game. As a senior, Gugliotta averaged more than 22 points and almost 10 rebounds per game.

Anthony Grundy, Guard
During Grundy’s senior season, he was named to the All-ACC first-team. Also during that season, Grundy became the first player in school history to lead his team in five major statistical categories (scoring, assists, rebounds, steals, 3-pointers made). He was also on the ACC All-Defensive team his senior season.

Todd Fuller, Center
Fuller led the ACC in scoring during his senior season, averaging 20.9 points per game; he also averaged 9.9 rebounds per game that season. Fuller was an Academic All-American, and earned the Rhodes Scholarship to the University of Oxford. He turned down the scholarship to play professional basketball. His No. 52 jersey has hung from the rafters of PNC Arena since October 2007.


Chris Corchiani comes up with a steal against North Carolina in the image above. Corchiani averaged 2.6 steals per game in four years at NC State. At the time of graduation, he ranked fifth in NCAA history in that category.