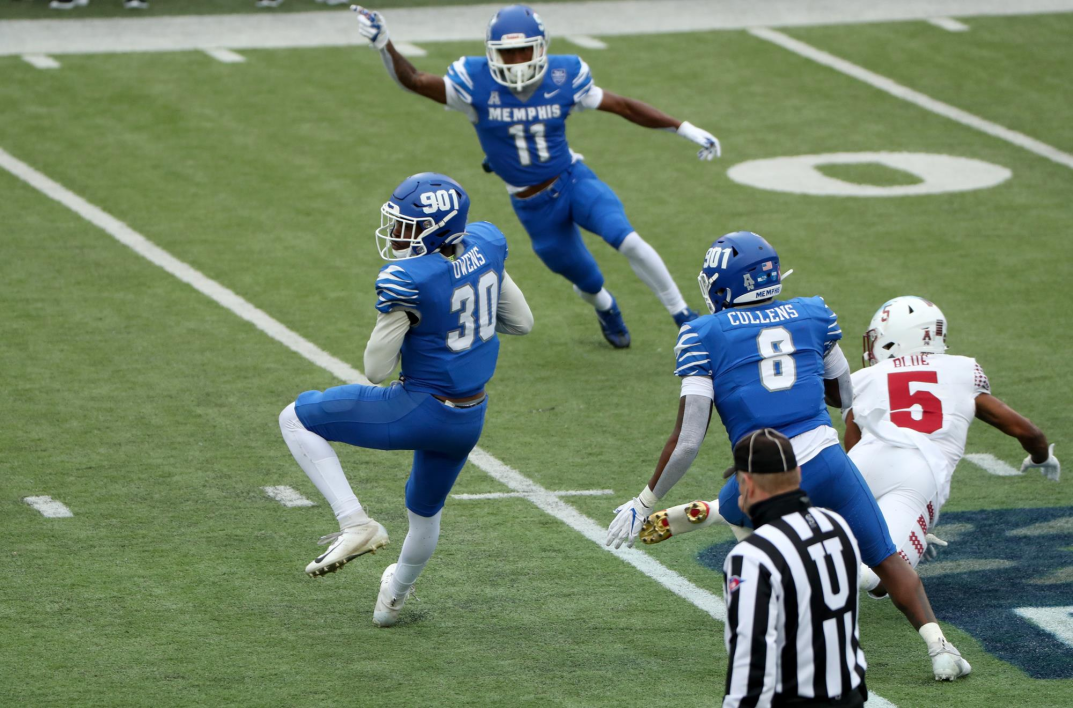 All eight conferences that are actively playing have players mentioned, as well as two Independent schools (Notre Dame and BYU). We previously looked at the top five offensive performances. Here are the top five statistical performers for each defensive and special teams category:

DB Rodney Owens, Memphis
Owens was a huge part of the Tiger defense as he picked up two interceptions and five tackles in the 41-29 win over Temple. He also had one pass defended and was on the field for 100% of the defensive snaps. Owens became the second player this season with two or more interceptions, five or more tackles, and a pass defended. He joins Florida State’s Asante Samuel Jr.

LB Trey Baldwin, Louisiana Tech
Baldwin was a force on the defensive side in the Bulldogs’ close 27-26 loss to UTSA. He recorded 18 tackles (14 solo), one sack, one interception, and a pass defended. Baldwin is just the fourth player since 2000 to have 15 total tackles, 10 solo tackles, an interception, and a sack in the same game. He is tied for the current FBS lead of 34 solo tackles this season. Baldwin is joined by Isaiah McDuffie (Boston College) and Gregory Grate Jr. (Middle Tennessee).

DB Nick Andersen, Wake Forest
The freshman had three interceptions and led his team with 11 tackles in Wake Forest’s 23-16 upset victory over Virginia Tech. Nine of his 11 tackles were solo tackles. Andersen is just the second freshman and eighth player to have 10 tackles and three interceptions in a game since 2000. The other freshman was Ohio’s Quentin Poling, who completed the feat against Idaho in 2014.

DB Yusuf Corker, Kentucky
Corker was the bright spot in Kentucky’s disappointing 20-10 loss to Missouri. He finished with 18 total tackles, 16 of them being solo, and a sack in this game. It was the first sack of his career, and the 18 tackles were also a career-high. Corker becomes just the second SEC player since 2000 to record 15-plus solo tackles and a sack in a game, joining LSU’s Kevin Minter. Minter accomplished the feat in 2012.

LB D’Marco Jackson, Appalachian State
Jackson led the Mountaineer defense in a solid 45-17 victory over Arkansas State. Jackson finished with seven tackles and two interceptions. He becomes just the fourth Appalachian State player since 2000 to have seven or more total tackles and multiple interceptions in a single game. The most recent to accomplish this feat was Clifton Duck in a 2017 victory over New Mexico State.

PR Phillip Brooks, Kansas State
Brooks put on a show when it came to returning as he returned four punts for 189 yards and two touchdowns in Kansas State’s 55-14 victory over Kansas. Brooks became just the sixth player and second Big 12 player since 2000 to have 180-plus punt return yards and multiple punt return touchdowns in a single game. The last player to complete this feat was Iowa’s Kevonte Martin-Manley. He did so against Western Michigan in 2013.

PR Isaiah Foskey, Notre Dame
Foskey was all over the field in Notre Dame’s 45-3 blowout of Pittsburgh. He scored a touchdown on a blocked punt return and also recorded two tackles and 0.5 sacks. He is just the second Notre Dame player since 2000 with a punt return touchdown, two total tackles, and 0.5 sacks in a single game. The previous member of the Fighting Irish to do so was safety Tom Zbikowski against Tennessee in 2005.

K Dalton Witherspoon, Houston
Witherspoon was a perfect 3-for-3 on field goals, and 4-for-4 for extra points in the Cougars’ 37-21 victory over Navy. He made field goals of 33, 53 and 45 yards. He finished with 13 points on the day. The 53-yard field goal was the longest made field goal of the week by any kicker.