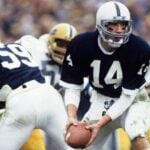 Over the 10-year span from 1973 to 1982, Penn State and Pittsburgh were ranked for their rivalry matchup every year. The final one of those was a top-5 showdown that took place on this day 40 years ago. In the second half, it was Penn State that ultimately exerted its dominance. The Nittany Lions stifled their rivals for a 19-10 victory. Setting the Stage Both teams were … END_OF_DOCUMENT_TOKEN_TO_BE_REPLACED 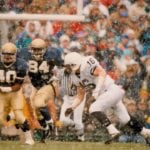 It certainly gets cold in November in South Bend, Ind., but when one thinks about Notre Dame football history and snow, one contest stands alone. It came on this day 30 years ago. With the ground at Notre Dame Stadium and the opponent wearing white, the Fighting Irish won a thriller. A late touchdown and 2-point conversion ultimately lifted Notre Dame to a thrilling 17-16 … END_OF_DOCUMENT_TOKEN_TO_BE_REPLACED 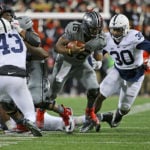 Since 2016, the winner of the annual contest between Ohio State and Penn State has won the Big Ten East every year. Those teams will meet again on Saturday as the Buckeyes look to win their sixth straight over the Nittany Lions. Despite Ohio State's recent dominance, three of the last six meetings have been decided by three points or less. That includes a 1-point game in a … END_OF_DOCUMENT_TOKEN_TO_BE_REPLACED 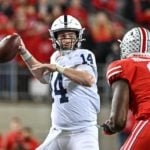 Penn State football is coming off a strong whiteout performance against Minnesota last weekend, winning 45-17. The Nittany Lions were able to manipulate a Minnesota secondary that allowed 304 yards through the air. Things looked shaky at first, with Penn State coming out with consecutive 3-and-outs followed by an intrepid interception thrown by quarterback Sean Clifford. … END_OF_DOCUMENT_TOKEN_TO_BE_REPLACED 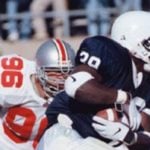 Throughout the course of the 1997 season, three different Big Ten teams spent time in the top 10. The first meeting between them took place on this day 25 years ago. In front of more than 97,000 people, Penn State scored the game's final 14 points to top Ohio State in a game of runs, 31-27. Setting the Stage Ranked preseason No. 1, Penn State was ranked second as it … END_OF_DOCUMENT_TOKEN_TO_BE_REPLACED