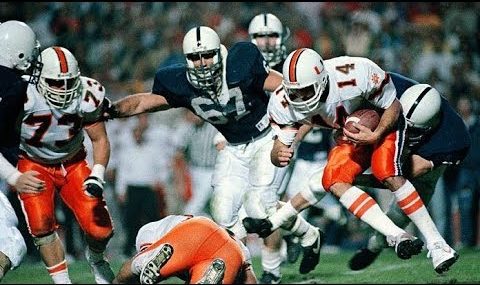 One might point to the 1987 Fiesta Bowl as a game that changed college football. At the time, the Fiesta Bowl was not considered a major bowl game.

Many bowls however, had conference tie-ins. With Miami and Penn State both being independents, the Fiesta Bowl created an opportunity for college football to hold a true national championship game.

Miami was seen as the overwhelming favorite, but an opportunistic Penn State defense stole the show. A late interception of the Heisman Trophy winner preserved a 14-10 win for the Nittany Lions.

Both teams were a perfect 11-0 as they arrived in Tempe, Ariz. on Jan. 2, 1987. Led by Heisman Trophy winning quarterback Vinny Testaverde, No. 1 Miami was nearly a touchdown favorite. The Hurricanes had played just one game decided by fewer than 12 points all season long.

No. 2 Penn State was no stranger to grinding contests out. The Nittany Lions had breezed through the early parts of the season, but had played close games against Maryland and Notre Dame in November.

Days before the contest, Miami players had infamously walked out of a Fiesta Bowl dinner for both teams. Defensive tackle Jerome Brown notoriously said, “The Japanese didn’t eat with Pearl Harbor the night before they bombed it.” Dressed in military-like apparel, Miami players left the location.

Statistically, Miami dominated with nearly triple Penn State’s yardage output. The Hurricanes finished with 445 yards to just 162 for Penn State, but as far as the Nittany Lions bent, they never broke.

A fumble by quarterback John Shaffer gave Miami the ball at the Penn State 23-yard-line in the second quarter. Melvin Bratton’s 1-yard touchdown run followed and gave the Hurricanes a 7-0 lead.

Penn State answered with its best drive of the night. The Nittany Lions proceeded to go 74 yards in 13 plays. On a designed bootleg, Shaffer kept it on his way to a 4-yard touchdown run.

The Penn State offense could do little else, but the defense came through time and time again. After a scoreless third quarter, Miami took advantage of good field position and a 20-yard run by Alonzo Highsmith. With less than 12 minutes to go, Mark Seeling’s 38-yard field goal put Miami back in front, 10-7.

After a stop, Miami had hopes of putting the game away, but Penn State All-American linebacker Shane Conlan made a huge play. Playing through significant injury, Conlan picked off Testaverde for the second time and rumbled 40 yards to inside the Miami 10-yard-line. Two plays later, D.J. Dozier went up the middle for the 6-yard touchdown with 8:13 remaining.

Trailing 14-10, Miami began its final drive at its own 20 with more than three minutes to play. Testaverde appeared on the verge of putting four earlier interceptions behind him. On the drive, Testaverde made a pair of clutch fourth-down throws, which included a 31-yard pass to Brian Blades that moved Miami into Penn State territory.

A pair of completions to Michael Irvin set Miami with 2nd-and-goal from the 5-yard-line, but as it had all year, the Penn State defense stiffened. After a sack by Tim Johnson and an incomplete pass, the Hurricanes faced 4th-and-goal from the 13-yard-line with 18 seconds remaining.

The final throw of Testaverde’s Heisman season would be one to forget. Testaverde eyed Brett Perriman, but there to pick it off was linebacker Pete Giftopoulos at the goal line. Penn State proceeded to run out the clock and seal the national title.

Despite the heartbreaking loss, Miami bounced back to go undefeated and win the national championship the following season. The Hurricanes would win three of the next five national titles.

As for Penn State, the Fiesta Bowl gave it its second national title under legendary head coach Joe Paterno. The 1986 title remains the last national championship for the Nittany Lions. It was sealed with a thrilling upset win in the Fiesta Bowl on this day 35 years ago.