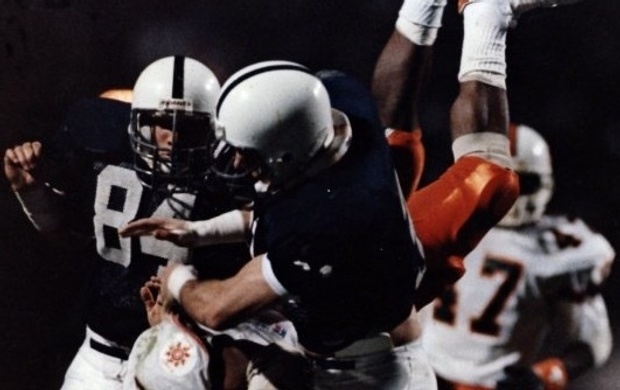 Under college football’s all-time winningest coach, Penn State won its most recent national championship in 1986. Joe Paterno guided the Nittany Lions to a perfect campaign and an upset for the title.

That season, Penn State tied a program record for wins in a season that still exists.

Penn State began the season ranked sixth in the AP Poll, but felt little resistance over its first four games. Throughout the course of the season however, the Nittany Lions were tested.

Penn State edged Cincinnati and Notre Dame by a combined 11 points and stopped a late 2-point conversion to hold off Maryland, 17-15. Penn State went 11-0 during the regular season, but defeated just one ranked team that year. That victory was a dominant 23-3 road victory at No. 2 Alabama.

Following a perfect regular season, Penn State was a heavy underdog as it traveled to Tempe to take on No. 1 Miami in the Fiesta Bowl for the national championship. The pregame hype leading up to the contest was significant. Most notably was an incident where Miami players walked out of a dinner scheduled for both teams.

As for the contest itself, it lived up to the hype. Miami was a 6.5-point favorite and dominated statistically, racking up 445 yards to 162 for Penn State. The Hurricanes also collected 22 first downs to eight for the Nittany Lions.

What Penn State was able to do was intercept Miami quarterback and Heisman Trophy winner Vinny Testaverde five times. After a field goal early in the fourth quarter gave Miami a 10-7 lead, Penn State answered midway through the period with a 6-yard touchdown run from All-American D.J. Dozier.

That 14-10 lead held. In the waning seconds, linebacker Shane Conlan, another All-American, sealed the win with his second interception of the night.

Throughout the season, Penn State ranked 17th nationally in scoring offense and third in scoring defense.

The upset victory over Miami wrapped up Penn State’s second national championship in five years. The end-of-season polls marked the only time during the 1986 season that Penn State was ranked No. 1.

Penn State’s 1986 national title remains the last for the program, although it did go undefeated in 1994, but settled for a No. 2 finish behind Nebraska. The 14-10 upset of Miami is still one of the most storied games in Fiesta Bowl history.