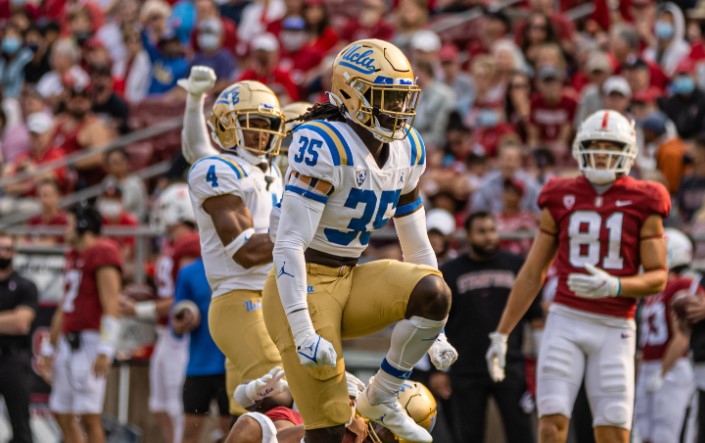 We have all seen our fair share of upsets throughout the first four weeks of the 2021 college football season, haven’t we?

A No. 10 North Carolina team led by preseason Heisman Trophy hopeful Sam Howell got taken down by a Virginia Tech team in Blacksburg in Week 1. Who can forget the blockbuster game in Week 2 when 12th-ranked Oregon went into Columbus and beat third-ranked Ohio State by a score of 35-28?

Let’s not forget NC State handing ninth-ranked Clemson its second loss of the season last week! Now, the question is who is on upset alert heading into Week 5?

Here are three teams who need to look out on Saturday:

Did we forget that Rutgers started the season 3-0 until it went to the “Big House” and got beat by a hot Michigan team? After a rough start, the Scarlet Knights battled back and lost by just a touchdown.

Rutgers linebackers Olakunle Fatukasi and Tyson Fogg were both in the top 10 in tackles last year in the Big Ten and are capable of slowing potent ground attacks. Let’s not forget that Ohio State has had a rough first quarter of the season as freshman quarterback CJ Stroud gets accustomed to the college game. The Buckeyes also rank 102nd in pass defense, allowing an average of 255 yards per game. Going into Piscataway and leaving with a win is hardly a slam dunk for head coach Ryan Day and company.

Are Chip Kelly and UCLA an illusion? UCLA beat LSU in Week 2 at the Rose Bowl. That victory seemed to put the Bruins on the map, and put the rest of the Pac-12 on notice.

This week, the Bruins host 3-1 Arizona State. The Sun Devils are coming off a dominating win over Colorado last week behind a stellar performance from sophomore quarterback Jayden Daniels. Daniels had 311 all-purpose yards for Arizona State and two rushing touchdowns.

Daniels will have to find success through the air this Saturday and he should have plenty of it, considering the Bruins rank 127th in pass defense. UCLA gives up an average of 330 passing yards per game. That’s the worst among Power 5 teams.

Florida lost a tough, early-season contest when Alabama came to Gainesville just two weeks ago. Florida came within a missed two-point conversion that could have sent the game to overtime in a heartbreaking 31-29 defeat.

Well, that was then, and this is now.

Florida travels to Lexington to face undefeated Kentucky on Saturday night. The Gators look for their first in conference road win of the season. Kentucky will rely on junior running back Chris Rodriguez Jr. Rodriguez averages more than 125 rushing yards per game and finished with 144 last week in a 16-10 win at South Carolina.

On the other hand, Florida has Emory Jones. In just a couple weeks, Jones has gone from a quarterback the fan base wanted replaced to one of the best dual-threats in the SEC. Jones averages just under 100 rushing yards himself.

Can the Wildcats stir up a huge upset over a top-10 team on Saturday night? We shall see.