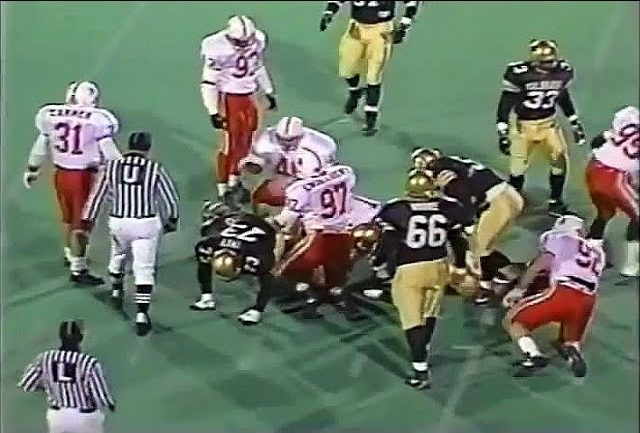 For the final eight years of the Big 8 Conference’s existence, the winner of the annual contest between Nebraska and Colorado claimed the conference crown every year.

There was however, one year where they shared the title. The reason?

The teams played to a tie on the field.

That contest came on this day 30 years ago. A blocked field goal as time expired by Colorado’s Greg Thomas preserved the 19-19 deadlock.

After an early-season loss to Washington, Nebraska arrived at Folsom Field in Boulder on Nov. 2, 1991 with a record of 7-1 and a No. 9 national ranking. The Cornhuskers had won four straight games, but to win the Big 8 outright, they probably needed to make it five.

Colorado was 5-2 and on a 3-game winning streak. The Buffaloes were the reigning AP national champions, ranked No. 15 and looking for a third straight win over Nebraska.

Nebraska had only led for about four minutes, but dominated the final quarter. Derek Brown’s 7-yard touchdown run with less than seven minutes to play evened the contest at 19. After an exchange of punts, the Cornhuskers moved down the frozen field with a chance to win.

The final march for Nebraska began at its own 46-yard-line with 1:05 to play. Quarterback Keithen McCant, who passed for 180 yards, managed to march the Cornhuskers to inside the Colorado 25-yard-line. With four seconds left, kicker Byron Bennett came on to try a 41-yard attempt for the win.

Colorado used all three of its timeouts before Bennett was finally able to swing his leg. Thomas however, leaped high into the air and knocked the ball to the ground and it rolled harmlessly out of bounds.

The contest ended how it began — all even.

Nebraska’s only lead came less than four minutes in when Bennett connected on a 27-yard field goal. Four minutes later, Colorado quarterback Darian Hagan scored his first of two rushing touchdowns — this one from 11 yards away.

After a Colorado field goal pushed the lead to 10-3 in the second quarter, Nebraska looked to be on the verge of tying the game after a 49-yard touchdown pass from McCant to Jon Bostick late in the first half. The ensuing extra point try however, was blocked and returned for two points by Colorado’s Greg Biekert.

Down 12-9, Bennett tied the game with a 35-yard field goal in the third. Hagan’s 4-yard touchdown run in the final minute gave the Buffaloes a 19-12 lead after three. From there, Nebraska outgained Colorado, 127-24.

Both Colorado and Nebraska would run the table for the remainder of the regular season, finishing 6-0-1 in Big 8 play. Nebraska capped the year with a 22-0 loss to co-national champion Miami in the Orange Bowl. The Buffaloes also finished the season in South Florida, falling to Alabama in the Blockbuster Bowl, 30-25.

While Washington and Miami each claimed national championships, Nebraska and Colorado did likewise in the Big 8. The tie was the first for the Cornhuskers in 15 years. It came on this day three decades ago.