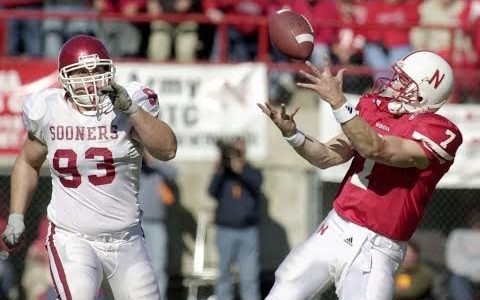 The 1971 matchup between No. 1 Nebraska and No. 2 Oklahoma still often gets the moniker, “Game of the Century”.

That however, was the only matchup of No. 1 vs. 2 between the schools. On this day 20 years ago, the teams again squared off atop one poll and again, it was the Cornhuskers who emerged. A stellar defensive effort and a trick play highlighted the second half as Nebraska triumphed, 20-10.

Oklahoma was the reigning national champion and on a 20-game winning streak as it arrived in Lincoln on Oct. 27, 2001. Miami was ranked No. 1 in the human polls, but in the BCS standings, it was the Sooners who sat on top, followed by Nebraska.

The Sooners had defeated Nebraska 31-14 during a perfect 2000 campaign. That victory snapped a 9-game losing streak to the Cornhuskers, but the Sooners had not won in Lincoln since 1987. Like Oklahoma, Nebraska was a perfect 8-0 coming in.

Defense Dominates the Second Half

The teams played to a 10-10 tie through two quarters, but the second half would be dominated by the Nebraska defense. Nebraska held the Sooners to just 119 yards in the second half, but with the fourth quarter more than halfway gone, the lead was just three.

The Cornhuskers had taken the lead on Josh Brown’s second field goal following a Erwin Swiney interception of Oklahoma quarterback Nate Hybl in the third quarter. With Nebraska nursing a 13-10 lead, Frank Solich and staff reached into their bag of tricks to put the Sooners away.

Brown’s first field goal gave Nebraska its first lead, but it appeared as though Oklahoma was going to retake the lead before halftime. The Sooners had 1st-and-goal from the Nebraska 2-yard-line, but had to settle for a Tim Duncan field goal with just seconds to play in the second quarter.

Each team would win its next two games, but a loss in the regular season finale for both would keep the respective teams from a Big 12 Championship rematch. Oklahoma was stunned by rival Oklahoma State. Nebraska would be handled at Colorado, but Crouch went on to win the Heisman Trophy.

Despite the loss to the Buffaloes, Nebraska remained No. 2 in the BCS standings and played Miami in the Rose Bowl for the national championship. The Cornhuskers were easily defeated, 37-14. Oklahoma closed the year with a 10-3 win over Arkansas in the Cotton Bowl as both teams finished 11-2 and in the top 10.

Since 2001, the teams have met just seven times and only twice as ranked teams. The last top-5 matchup went Nebraska’s way and on this day two decades ago.