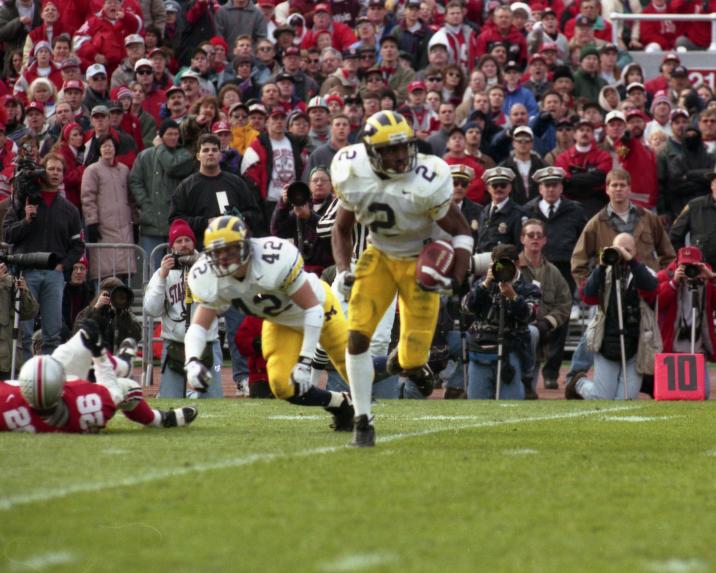 The Ohio State-Michigan rivalry is where players become legends.

On this day 25 years ago, the contest had an unlikely result and an unlikely hero. Backup quarterback Brian Griese came off the bench for the Wolverines and rallied his team from a 9-point deficit to ruin his rival’s perfect season and national championship aspirations, 13-9.

Ohio State was 10-0 and ranked No. 2 in the country as it arrived for its rivalry showdown with Michigan on Nov. 23, 1996. The Buckeyes had already defeated three ranked teams and were healthy favorites to make it four.

21st-ranked Michigan had lost consecutive games after a 7-1 start as it made its way to Columbus. The Wolverines had knocked Ohio State from the ranks of the undefeated in 1993 and 1995 and were looking to do so for the third time in four years — this time at Ohio Stadium.

For one half, the Michigan offense could get nothing going. Fortunately for the Wolverines, Ohio State had twice settled for short Josh Jackson field goals inside the 5-yard-line.

As the teams went to the locker room, the deficit was just 9-0.

Quarterback Scott Dreisbach had managed just 29 yards passing in the first half. Second-year head coach Lloyd Carr decided a change was needed. He turned to backup quarterback Brian Griese, who instantly gave the Wolverines a spark.

The second half was just a minute old when Griese hit a slanting Tai Streets, who outran defenders for a 68-yard touchdown. What was once a 9-point deficit was now just two.

The defense responded for Michigan as the next three drives resulted in punts. On the final snap of the third quarter, Michigan took its first lead as Remy Hamilton connected on a 44-yard field goal.

Down 10-9 to start the fourth quarter, Ohio State punted on each of its first three possessions of the final period. After a time-consuming drive culminated in a 39-yard field goal by Hamilton to push the lead to four with 1:19 left, the Buckeyes had one last chance.

Two long passes from Joe Germaine to Dimitrious Stanley moved the Buckeyes into Michigan territory, but an intentional grounding penalty soured their hopes. On the game’s final play, Germaine’s desperation heave was intercepted by Marcus Ray.

For the second year in a row and third time in four years, Ohio State’s dreams of an undefeated season had ended at the hands of the maize and blue.

Despite the loss, Ohio State would go to the Rose Bowl where it would play spoiler. The Buckeyes rallied for a 20-17 win over undefeated Arizona State to keep the Sun Devils from winning a national championship. Ohio State finished behind only national champion Florida in the final polls.

Michigan would fall to Alabama in the Outback Bowl to finish 8-4 and No. 20 in the AP Poll. The following season, Griese would lead the Wolverines to a perfect 12-0 record and a share of the national championship. One might argue that his legacy at Michigan began with a second-half rally on this day a quarter-century ago.