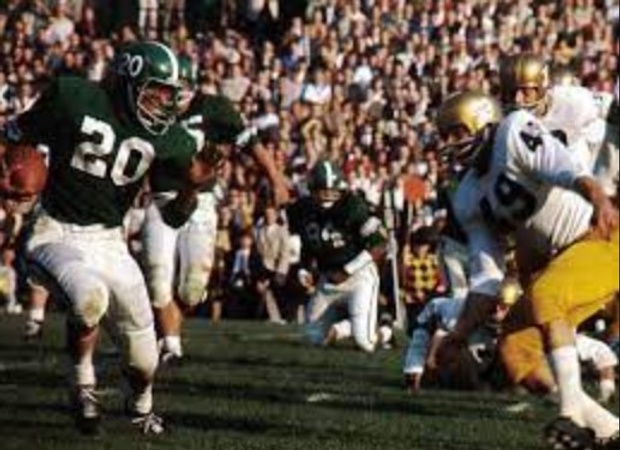 Four of those came under Daughtery.

One of those championship seasons however, was not 1963. That would be the Spartans’ 10th campaign under the coaching legend.

Although Michigan State managed to finish ranked in the top 10 for the fifth time in nine years, the Spartans didn’t get off to the greatest of starts. After opening the year with a 31-0 shutout of North Carolina, Michigan State dropped a 13-10 heartbreaker at USC before tying rival Michigan, 7-7.

After a 1-1-1 start, Michigan State rattled off five straight wins, which included consecutive victories over top-10 teams in Northwestern and Wisconsin. At 6-1-1 overall, the season ended at home for what would serve as a de facto Big Ten championship game.

Against an Illinois team headlined by All-American Dick Butkus, the Spartans proved to be no match. The Fighting Illini managed to claim the conference crown with a 13-0 victory.

At the time, only the winner of the Big Ten played in a bowl game. The Fighting Illini would go on to beat Washington in the Rose Bowl, 17-7.

Despite having an All-American in the versatile Sherman Lewis, who led the Big Ten in yards per rush, yards from scrimmage and total touchdowns, Michigan State ranked just 55th nationally in scoring offense. The defense led by Dan Underwood however, ranked fourth, allowing just seven points per game.

The Spartans recorded two shutouts in 1963 and allowed just three opponents to hit double digits. USC, Wisconsin and Illinois all finished with 13 points against Michigan State.

For Michigan State, the 1963 season was an improvement after a 5-4 campaign in 1962. Following a 4-5 campaign in 1964, the Spartans claimed consecutive national championships in 1965 and 1966 — although the former was awarded only retroactively by Football Research.

During the 1963 season, Daughtery joined Charlie Bachmann as the only Michigan State head coaches to spend a decade in East Lansing. Daughtery would finish with a program record 109 wins in head coach. That record lasted until 2019 when it was surpassed by Mark Dantonio.