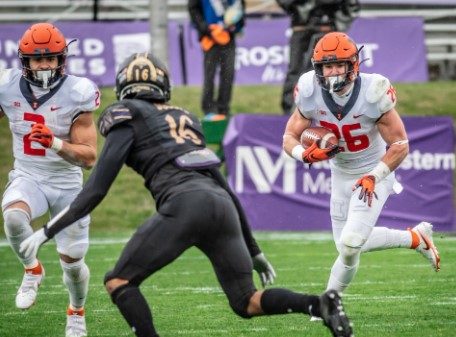 What a terrible weekend it was to be an Illinois fan.

Illinois football got embarrassed by Northwestern on Saturday afternoon. Later that night, Illinois basketball got upset by a very good Missouri team.

Two losses to rivals in less than 12 hours? That hurts a little. On top of that, Lovie Smith was fired as head coach. What a way to top off 2020.

There’s been a lot of speculation about who the next head coach will be. It’s almost seemed to overshadow the fact that the Fighting Illini have one more game this weekend.

Originally, when the Big Ten decided to come back, the teams that were in the same spot in each division were supposed to play each other. Realistically, the Illini should be playing Michigan this weekend then, who canceled its game against Iowa due to COVID-19. Illinois was rescheduled to visit Penn State this weekend instead.

A Look at Penn State

Penn State wildly underperformed this year. The Nittany Lions started the year in the top 10 in the polls this preseason. They lost five straight to start the year and were the last Big Ten team to notch a win.

Raise your hand if you saw that coming. This is the first time in their program history that they’ve lost their first five games of the season.

Unfortunately for Illinois, it is getting Penn State right when the Nittany Lions have seemed to figure things out. They’ve won three in a row over Michigan, Rutgers, and Michigan State.

Jahan Dotson has had a great year for the Nittany Lions. The wide receiver has had 46 receptions, for 695 yards, and six touchdowns. Quarterback Sean Clifford has had a decent year as well.

He hasn’t taken the huge jump that Penn State was hoping for though. This year, Clifford has thrown for 1,598 yards, along with 14 touchdowns and nine interceptions.

Penn State statistically has the second-ranked offense in the Big Ten, despite its record. The offense averages 411.6 yards per game. This doesn’t bode well for Illinois as its defense gives up 451.1 yards per game.

A Look at Illinois

The nightmare of a season is almost over. Besides its two wins, Illinois has only looked competitive in one of its losses. In four of their five losses, the Fighting Illini have been dominated.

There’s no shame in losing to either of those squads this year. However, Illinois led Iowa 14-0 at one point before getting outscored the rest of the game 35-7, to lose 35-21. Against Northwestern, the score didn’t seem so bad, losing 28-10.

Against Northwestern last week, the defense gave up 149 yards rushing to a running back who had a total of 53 yards all year this year. Want to throw even more salt in that wound? The Illini gave up 142 to another running back who only had 32 total rushing yards this year.

That’s a combined 291 yards to two guys, who before this game, had a total of 85 yards combined. If there’s one thing about the Lovie Smith-coached teams, it’s that the defense struggled mightily.

The offense has been OK this year. The rushing attack has been great. Statistically in the Big Ten, Illinois is the second-best rushing team. It is going to have to keep this up against Penn State.

Quarterback Brandon Peters hasn’t taken a step forward after a solid year last year. Josh Imatorbhebhe is foregoing this game and entering the 2021 NFL Draft, which is fantastic for him. Without his presence in the passing game however, it significantly takes away from the attack through the air.

Illinois is going to have to play a perfect game if it wants a shot in this one. Penn Sate has hit a stride and started to perform the way everyone thought it would all year long. After two nice wins in a row, Illinois has lost two games embarrassingly in a row.

You wonder who is going to play at quarterback this week. Peters has been pulled the last two weeks for Isaiah Williams. Williams has come in both weeks and thrown touchdowns.

It was rainy and windy last weekend in Evanston which explains why both Illinois and Northwestern struggled to throw all game. Peters finished just 3-for-14 for 21 yards. Not great. Williams came in last week and was 4-for-8 for 86 yards and a touchdown.

Penn State will more than likely have its way with the Illini defense. The defense has been plagued by both injuries and testing positive for COVID-19. This defense can be great when everything clicks.

It just hasn’t clicked at all for Illinois this year. Considering Penn State has the second-best offense in the Big Ten as well, it doesn’t look like a good match-up for the Illini. It could be a long day for Illinois.

Hopefully, Illinois goes out and plays motivated. Offensive coordinator, Rod Smith, will serve as the interim coach on Saturday. Jimmy Lindsey will be taking over the defense this week as well.

It will be interesting to see the play calling on defense.