Drum or No Drum: Notre Dame Takes Care of Purdue 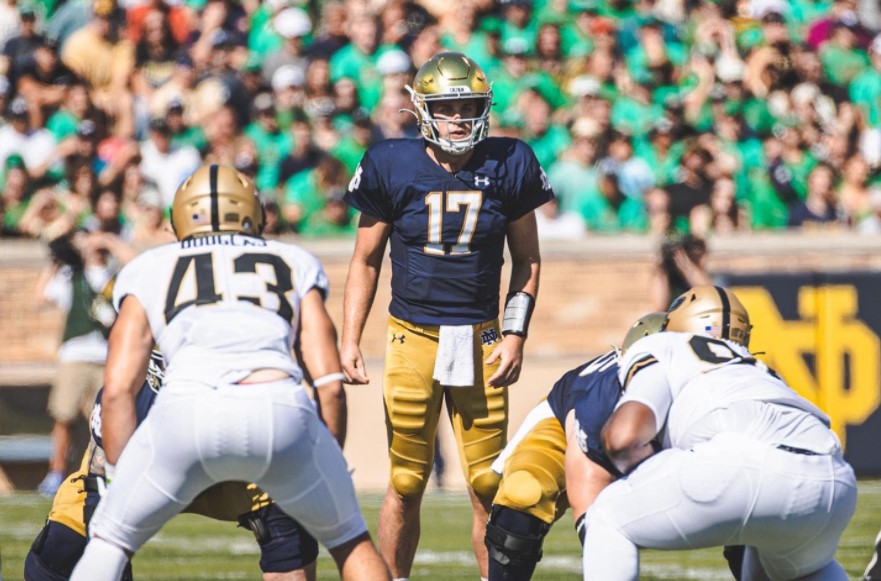 On a warm Saturday afternoon in South Bend, the story before the game wasn’t that in-state rivals Purdue and Notre Dame were competing again for the first time since 2014.

Nope, it was that the illustrious Purdue marching band drum could not join them because Notre Dame would not let it through the home tunnel and the drum was too large for the visitors’ tunnel. Purdue has had this drum with them every game since its very first appearance back in 1979.

Drum or no drum, Purdue couldn’t get it done against the Fighting Irish.

Quarterback Jack Coan completed just 48% of his passes, going 15-for-31 with 223 yards, and two touchdowns for Notre Dame. The Irish started slow, trailing 3-0 after a quarter. Notre Dame finally found the end zone with 13:51 left to go in the second quarter when Coan and Kyren Williams hooked up for a 39-yard touchdown. Williams finished the game with 138 all-purpose yards and two touchdowns.

The Boilermakers outgained Notre Dame 348 to 343, thanks to 291 passing yards between quarterbacks Jack Plummer and fifth-year senior Aiden O’Connell. Wide receiver Milton Wright had the only touchdown for Purdue. His 2-yard touchdown reception from Plummer came with just over seven minutes left to go in the third quarter.

Defense shined bright for both teams on Saturday. Purdue’s pass rush was able to sack Coan a total of four times. Linebacker Jaylen Alexander and defensive end Damarcus Mitchell each notched a sack.

Linebacker JD Bertrand had a team-high 12 total tackles for the Irish; he has 34 total tackles to start his 2021 season. Safeties DJ Brown and Kyle Hamilton both had crucial interceptions late in the contest to help seal the deal for Notre Dame.

Both Notre Dame and Purdue will head to Illinois next week. Purdue will travel to Champaign to play Brett Bilema and the Illinois Fighting Illini for the Purdue Cannon Trophy. Illinois is coming off a heartbreaking loss late on Friday night to Maryland.

Notre Dame will travel to Soldier Field in Chicago to play a gritty Wisconsin team. The Badgers are coming off a bye week after beating Eastern Michigan on Sept. 11.