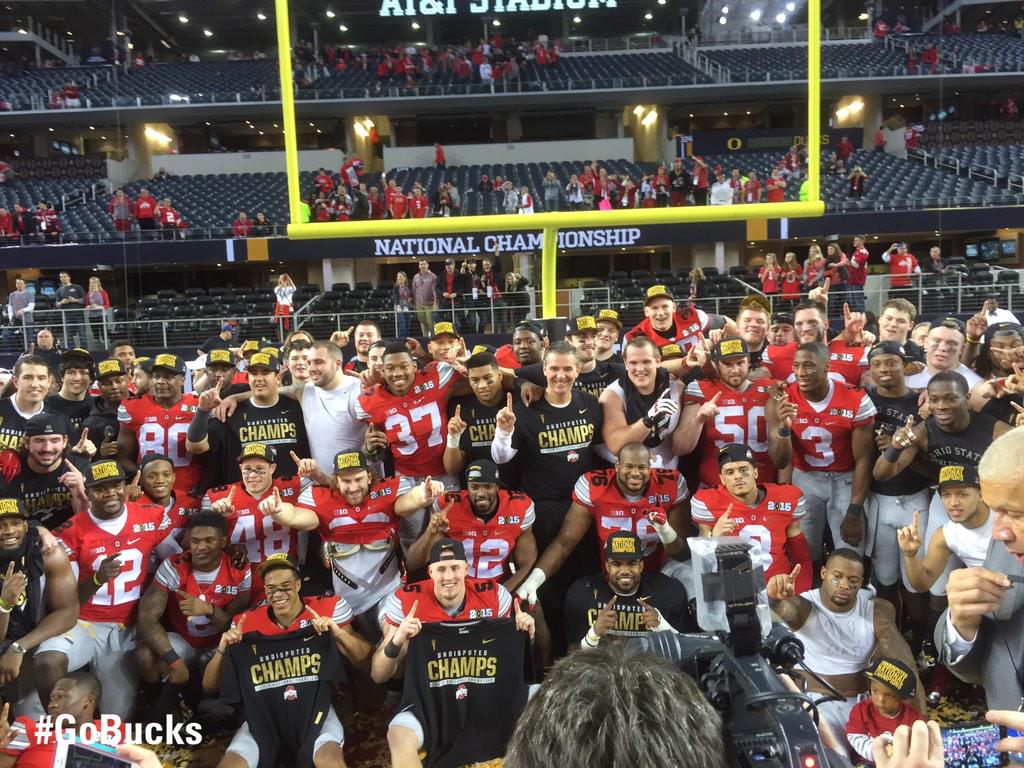 As for the Big Ten, it went from 11 teams to 14. It also saw divisions go from Legends and Leaders to East and West. The Big Ten had one team claim a national title during the decade. It came from the East division.

Here’s a look back on the best season of the decade for every team in the Big Ten East:

Record: 8-5, lost to Tennessee in Gator Bowl, 23-22
Final Ranking: None
Key Players: Stevie Scott III, RB; Whop Philyor, WR; Logan Justus, K
Overview: Indiana was unable to tie a school wins record as it let a 13-point lead slip away in a Gator Bowl loss to Tennessee to close 2019, but it did win eight games for the first time since 1993. That was also the last time the Hoosiers finished with a winning Big Ten record before last season.

Record: 9-4, beat East Carolina in Military Bowl, 51-20
Final Ranking: No. 23 AP; No. 24 Coaches
Key Players: Torrey Smith, WR; Alex Wujciak, LB; Kenny Tate, S
Overview: Still a member of the ACC in 2010, Maryland started the decade with a 9-win season. It was the sixth time in 10 years that the Terrapins had a winning season under head coach Ralph Friedgen. Prior to that, they had suffered through nine losing seasons in 10 years. Inexplicably, Friedgen was fired after the season. Maryland has had just two winning campaigns since and hasn’t fared better than 7-6.

Record: 11-2, beat Virginia Tech in Sugar Bowl in overtime, 23-20
Final Ranking: No. 12 AP; No. 9 Coaches
Key Players: Denard Robinson, QB; David Molk, C; Mike Martin, DE
Overview: Michigan has won 10 games three times in five seasons under Jim Harbaugh, but the best year of the decade for Michigan was the first under Brady Hoke. 2011 was the season during the decade where the Wolverines had their highest win total and highest final ranking. It was also the only year of the decade that they beat Ohio State and the only season where they won a major bowl game.

Record: 13-1, Big Ten champions, beat Stanford in Rose Bowl, 24-20
Final Ranking: No. 3 AP; No. 3 Coaches
Key Players: Connor Cook, QB; Shilique Calhoun, DE; Max Bullough, LB
Overview: Michigan State made the College Football Playoff in 2015, but that isn’t the season that makes the list for the Spartans. In 2013, Michigan State finished the regular season 11-1 before rallying to beat No. 2 Ohio State in the Big Ten Championship to end the Buckeyes’ 24-game winning streak. The outright Big Ten title was the first for Michigan State since 1987. The Spartans would go on to beat Stanford in the Rose Bowl to finish with their best national ranking since 1966.

Record: 14-1, Big Ten champions, beat Oregon in National Championship, 42-20
Final Ranking: No. 1 AP; No. 1 Coaches
Key Players: J.T. Barrett, QB; Ezekiel Elliott, RB; Joey Bosa, DE
Overview: The first national champion of the College Football Playoff era, things didn’t start great for Ohio State. The Buckeyes dropped their home opener to Virginia Tech after struggling with Navy. From there on, Ohio State rattled off 13 straight wins. Ohio State was on the outside looking in when it came to the College Football Playoff entering championship Saturday, but was able to secure the final spot after a 59-0 win over Wisconsin for the Big Ten Championship. Ohio State rallied from a 21-6 deficit to beat No. 1 Alabama in the Sugar Bowl before topping Heisman Trophy winner Marcus Mariota and Oregon for the title in Arlington.

Record: 11-3, Big Ten champions, lost to USC in Rose Bowl, 52-49
Final Ranking: No. 7 AP; No. 7 Coaches
Key Players: Trace McSorley, QB; Saquon Barkley, RB; Tyler Davis, K
Overview: Penn State finished 11-2 twice with a pair of New Year’s Six victories during the 2010s, but it’s an 11-3 season that gets the nod. In 2016, Penn State won its first Big Ten title since 2008 and finished with its highest national ranking since 2005. The Nittany Lions overcame a 2-2 start and a 49-10 beatdown at the hand of Michigan to win nine straight games. That included a 24-21 win over No. 2 Ohio State and a win over Wisconsin for the Big Ten title in which they trailed 28-7 at one point. Penn State was unable to tie a school wins record as it let a 49-35 fourth-quarter lead slip away in a Rose Bowl loss to USC.

Record: 9-4, lost to Virginia Tech in overtime in Champs Sports Bowl, 13-10
Final Ranking: None
Key Players: Brandon Coleman, WR; Khaseem Greene, LB; Logan Ryan, CB
Overview: Rutgers finished 9-4 twice during the 2010s, but in 2012, it tied atop the Big East. The Scarlet Knights finished in a 4-way tie for the conference title, but Louisville would get the BCS nod. The season ended on a sour note as Rutgers lost its final three games, including a 20-17 heartbreaker to Louisville that would have given it the outright Big East title. 2012 marked the Scarlet Knights’ first share of a conference title since 1961 as a member of the Middle Atlantic Conference. Rutgers was a charter member of the American Athletic Conference in 2013 before leaving for the Big Ten in 2014.