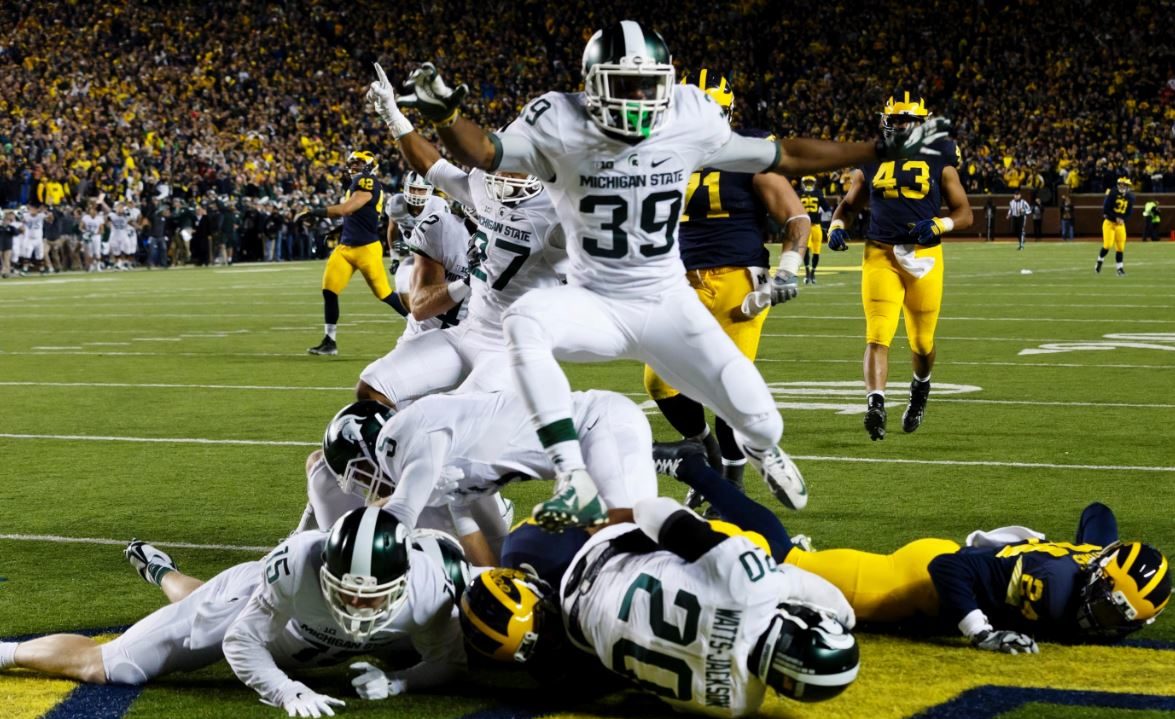 Dantonio inherited a team that was coming off three straight losing seasons and five in seven years. During his tenure, Dantonio won 115 games and more than 2/3 of the contests he coached in.

On Friday, we completed the second part of our series with Nos. 10 down to No. 6. We cap the series with the five best wins for the Spartans under Dantonio.

5. Spartans Rally From 20 Down in Fourth to Top Baylor in Cotton Bowl

(8) Michigan State 42, (5) Baylor 41
Jan. 1, 2015
For three quarters, the Michigan State defense had no answer for Baylor. The Bears took a 41-21 lead into the fourth quarter of the Cotton Bowl, but missed two field goals and had a turnover on downs in Michigan State territory. The Spartans, on the other hand, scored three touchdowns over the final 12:09 to stun Baylor. After Connor Cook found Josiah Price for an 8-yard touchdown, Jeremy Langford scored from a yard out with less than five minutes to play. Baylor had a chance to put the game away, but Chris Callahan’s field goal with just over a minute to play was blocked and returned into Bears’ territory. After a 17-yard pass from Cook to Tony Lippett kept the Spartans alive, Cook found Keith Mumphery for the game-winning 10-yard touchdown with 17 seconds remaining. Langford rushed for 162 yards and three scores in the win. Baylor quarterback Bryce Petty passed for 550 yards, but his final pass was intercepted by Riley Bullough.

(6) Wisconsin 31, (16) Michigan State 37
Oct. 29, 2011
Michigan State led 31-17 in the final quarter, but a touchdown run and a touchdown pass from Wisconsin’s Russell Wilson made overtime seem inevitable. With four seconds remaining and Michigan State at the Wisconsin 44-yard-line, Dantonio was forced to choose between a throw into the end zone and a 61-yard field goal try. He sent out the offense. Quarterback Kirk Cousins heaved one for the end zone that was deflected and caught by Keith Nichol near the goal line. Nichol was initially ruled short, but replay showed the football touch the goal line. In improbable fashion, Michigan State had won on the game’s final play.

(2) Ohio State 24, (10) Michigan State 34
Dec. 7, 2013 (Big Ten Championship, Indianapolis)
Michigan State was all that stood between undefeated Ohio State and the BCS National Championship. The Buckeyes had won 24 games in a row and were healthy favorites over the Spartans. Michigan State raced to a 17-0 lead, but Ohio State answered with 24 straight points to take a lead into the final quarter. Down 24-20, it took the Spartans less than four minutes into the final period to go back in front as Connor Cook found Josiah Price for a 9-yard touchdown. After the Michigan State defense stopped Ohio State quarterback Braxton Miller short of a first down later in the game, Jeremy Langford sealed the win with a 26-yard touchdown with just over two minutes remaining. It clinched Michigan State’s first outright Big Ten title since 1987.

(5) Stanford 20, (4) Michigan State 24
Jan. 1, 2014 (Rose Bowl, Pasadena)
Playing in its first Rose Bowl since the end of the 1987 season, Michigan State twice fell behind by 10 in the first half. By the end of the third quarter, Michigan State had drawn even. The Spartans look their first lead less than two minutes into the final quarter when Connor Cook found Tony Lippett for a 25-yard touchdown. Stanford would draw to within four with a field goal, but the Spartans sealed the win by stuffing Ryan Hewitt on 4th-and-short. Cook passed for 332 yards and two scores in the win, but did have an interception returned 40 yards for a touchdown by Stanford’s Kevin Anderson.

(7) Michigan State 27, (12) Michigan 23
Oct. 17, 2015
Undefeated Michigan State had never led at rival Michigan and needed a miracle to avoid the road upset. With just 10 seconds to go, the Wolverines faced fourth down near midfield, nursing a 23-21 lead. The Spartans seemingly needed either a block or return for a touchdown. Instead, they got a Michigan miscue. Punter Blake O’Neill was unable to handle the snap, but rather than fall on the ball near his own 40, he tried to get the punt away. O’Neill was hit as he attempted to get the punt away, forcing the ball to pop into the air. The ball landed in the hands of Michigan State freshman Jalen Watts-Jackson. Watts-Jackson used a couple key blocks on his way to a 38-yard touchdown as time expired. The score stunned more than 111,000 in attendance at Michigan Stadium and lifted the Spartans to an improbable 27-23 victory.